Marvel Studios wrapped up their D23 Expo presentation with a look at “The Marvels,” a film that will not only be a sequel to “Captain Marvel” but also a follow-up to the Disney+ series “Ms. Marvel” and “WandaVision.”

The trailer (which is not available online) shows what happened after the post-credits scene in “Ms. Marvel,” as Kamala Khan (Iman Vellani) has been flung into space and has swapped places with Monica Rambeau (Teyonah Parris) and Carol Danvers (Brie Larson). Rambeau was in a space suit walking outside the SABER space station to investigate a strange disturbance with Nick Fury, but now the eyepatched chief finds his hands full with a teenage superhero fangirling over him.

It seems that something is wrong with Kamala’s bangle. Whenever she uses her hardlight powers, she instantly switches places with Captain Marvel. One moment, she is with her family and Monica trying to get an understanding of what is going on. The next, Carol Danvers is in her living room while Kamala is in an alien ship shrieking as Goose the Cat — actually a Flerkin — devours several bad guys.

As the Avengers and the Guardians of the Galaxy have shown, it takes some time for a superhero team to work together, so even though Kamala is like an angel given her wings at the chance to team up with her favorite superhero, Carol and Monica are insistent that they are NOT a team. We’ll see how long that lasts. 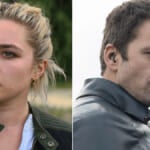