TheWrap magazine: Director Mike Rianda and co-director Jeff Rowe reveal the unlikely origin of one of the film’s best sequences

A version of this story about “The Mitchells vs. the Machines” first appeared in the special animation section of Awards Preview issue of TheWrap’s awards magazine.

“The Mitchells vs. the Machines,” the latest groundbreaking animated feature from Sony Pictures Animation and the producing team of Phil Lord and Chris Miller (all of whom collaborated on the Oscar-winning “Spider-Man: Into the Spider-Verse”), runs on parallel tracks. On one, it’s a charming story about family togetherness with frustrated future filmmaker Katie (Abbi Jacobson) being driven across country by her overbearing father Rick (Danny McBride), alarmingly upbeat mother (Maya Rudolph) and her adoring little brother (Mike Rianda). On the other track, “The Mitchells vs. the Machines” is a cautionary fable of technology run amok, as the robot apocalypse breaks out just as the Mitchells are making their trip to drop Katie off at college.

Director Mike Rianda and co-director Jeff Rowe (who penned the script together) regularly mix emotional dynamics alongside steely action. Never are the two more entwined than in a sequence toward the end of the film, when Katie and her dad Rick defeat a league of robots while singing to T.I. and Rihanna’s “Live Your Life,” a song they had performed together in a talent show years earlier. (Mercifully, the verses by T.I. about haters and soldiers in Iraq have been removed.) It’s a moment of family bonding, wonderfully snuggled in next to some rousing ass-kicking.

It’s such a perfect moment that it seems likely to have been delivered, fully formed, from the minds of its creators. But no. “It went through this really interesting evolution,” Rianda said. “Basically, we had this movie that was about these two characters coming together from different generations — the whole core of the movie was about their emotional connection. In the first drafts of the script, they just hugged, like at the end of a sitcom, and it was very unsatisfying. And Jeff and I would have these days where we’re all hyped up and freaking out, like, ‘Why isn’t the movie great yet?’” 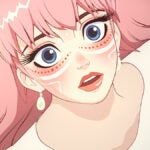 The breakthrough came when Rowe remembered roller-skating to Garth Brooks, of all things. “We were trying to figure out what success looked like to Rick,” Rowe said. “What does he see in his head that makes him happy? And it’s doing something with his daughter again. We wanted to hang something visual and fun that spoke to that. And then somehow we conflated that with when I was 12 and I would go to the roller rink and request the song ‘The Thunder Rolls’ by Garth Brooks.”

Rianda and Rowe imagined a moment where the chorus of “The Thunder Rolls” would accompany blasting robots and realized the bonding scene should be a musical number. “We realized that having them come together over a song from their past could be really powerful,” Rianda said.

The use of “Live Your Life” (which samples “Dragostea Din Tei” by O-Zone, a song that gained popularity thanks to an internet video) is so perfect, in fact, that it is shocking to hear that it wasn’t the filmmakers’ original choice. They wanted “I Wanna Dance With Somebody” by Whitney Houston, which Rianda said “ticks all the nostalgic boxes,” but that choice was nixed because its suggestive lyrics would seem weird being sung by a father and daughter.

“Ultimately, (head of story) Guillermo Martinez came up with this idea that it should be as powerful visually as it is sonically, and wouldn’t it be great if they were soaring on robots and looking at each other and laughing?” Rianda said. The filmmakers tasked the four editors with bringing in 25 songs each, then sorted through the 100 songs to choose “Live Your Life.” “I teared up on the mix stage hearing the way that was mixed into the music,” Rowe said.