Rob Zombie is giving audiences a peek behind the curtain of his upcoming feature “The Munsters,” a live-action remake of the 1960s sitcom, with a second trailer. Accompanying the preview is the news that the PG-rated film will release on Blu-Ray, DVD and digitally on Sept. 27, 2022.

As you can see in the first few seconds of the clip, the Special Collector’s Edition will showcase more than 60 minutes of behind-the-scenes footage of the cast and crew in a segment called “The Munsters: Return To Mockingbird Lane.” The Universal Pictures Home Entertainment release will include commentary by writer-director-producer Zombie. 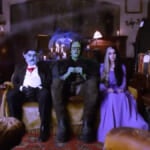 In “The Munsters,” a zany monster family is thrown into mayhem by the courtship of Herman Munster (Jeff Daniel Phillips), a dead ringer for Frankenstein’s monster and a 150-year-old vampiress named Lily (Sheri Moon Zombie).

“The moment I laid eyes on you, I knew that you were special,” Lily tells Herman after she sees him perform at the Zombie-A-Go-Go Nightclub. “Would you like to come over for dinner one night?”

Their whirlwind romance takes them through the streets of Paris, the English countryside, a tropical beach – but even while they’re on top of the world, not everyone approves.

“We’ve got to get rid of that bozo Herman Munster,” says her father, The Count (Daniel Roebuck). “He’s not the type of person I want my Lily with.”

Over a beachy ’60s soundtrack, the trailer rounds out with a glimpse at the film’s supporting cast: Richard Brake, Jorge Garcia, Sylvester McCoy, Catherine Schell, Cassandra Peterson and Tomas Boykin, along with original “The Munsters” cast members Butch Patrick and Pat Priest.

Watch the full trailer above.