This review of “The Starling” was first published after the film’s premiere at the 2021 Toronto Film Festival.

Sometimes things aren’t always what they seem: “The Starling,” for example, is an impressively credited drama that premiered at the prestigious Toronto Film Festival on its way to Netflix. So viewers may be surprised to find they’ve happened upon a movie that would feel far more at home on the Hallmark Channel.

Then again, sometimes things are exactly what they seem. And in nearly every other way, predictability defines Ted Melfi’s disappointing follow-up to his widely-admired Oscar nominee “Hidden Figures” and his enjoyably prickly indie “St. Vincent.”

Just as its name announces, “The Starling” is all about learning to fly. This increasingly blunt metaphor includes an actual avian, who swoops through the opening credits in a clunky effect that simultaneously recollects the plastic bag from “American Beauty” and the “Forrest Gump” feather. 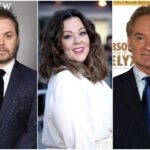 The bird is eventually brought down to earth, but it’s not the only one. Also grounded are Lilly (Melissa McCarthy) and Jack (Chris O’Dowd), who are still reeling from the loss of their baby daughter a year earlier. Jack seems to have been hit hardest, since he’s living alone in a mental health facility that Lilly visits weekly for family therapy sessions. When she’s not there, she works listlessly at a supermarket, gardens in their farmhouse yard, and begins therapy herself with a veterinarian named Larry (Kevin Kline). It doesn’t really make sense that Larry is also a psychologist, but it’s convenient because Lilly quickly develops a relationship with the starling in her garden.

The bird is both territorial and adversarial, but more important is the fact that it’s tending to its own babies. When Lilly loses a little sock from her daughter, you can bet it will turn up in a nest. When the bird gets sick, you can bet Lilly will try to nurse it back to health. And if the bird can heal, you can bet the humans will follow.

Sorry, is that too many spoilers? Only if you’ve never seen a movie like this before — which is unlikely because there are so very many movies just like this one in the world. 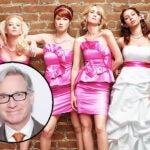 “The Starling” does have a notable advantage, boasting the sort of cast that can burnish a generic project with expert sheen. O’Dowd does this best, brushing past the shallow sentimentality of Matt Harris’ script — which appeared on Hollywood’s Black List back in 2005 — to tap into some real emotion. Jack walks as though the world’s burdens are weighing him down, his eyes barely focused because he knows there’s nothing out there worth looking at.

McCarthy works just as hard, but she has the more difficult task. Indeed, it’s frustrating knowing how good she is at drama to see her so hemmed in. More character than human, Lilly feels very much like a writer’s invention. She’s someone who connects with a bird as she’s spreading her own wings, who mows an overgrown lawn when she’s considering a fresh start, harvesting her garden when she’s finally ready to start anew. 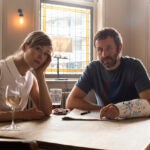 Also Read:
‘State of the Union’ Star Chris O’Dowd on Exploring the ‘Sausage Factory of a Marriage’

As for Kline, he could portray a gruffly wise charmer in his sleep — and it’s fair to say he’s not asked to do much more. He and McCarthy play off each other well, but they simply don’t have enough to work with. The same is true for the barely-present supporting cast, too. Why hire pros like Loretta Devine, Timothy Olyphant and Daveed Diggs if you’re not going to give them anything interesting to do?

The crew is also packed with underused veterans. Cinematographer Lawrence Sher, whose resume spans from “Garden State” to “Godzilla” to “Joker,” is required to pair his work to the film’s deeply conventional tone. He frames every scene just so, which suits the overall structural artifice but can’t enhance it. Music supervisor Julia Michels (“A Star Is Born”) commissioned new songs from Brandi Carlile and The Lumineers, but the soundtrack is used in a way that feels insistently literal. Benjamin Wallfisch’s stringy score shares this approach, jauntily reminding us that we’re watching a woman fight with a bird, or save a bird, or be inspired by a bird.

The smooth professionalism of so many outstanding participants can’t help but elevate a very ordinary film a little bit higher. Despite the best efforts of both McCarthy and O’Dowd, though, there’s never a moment where it truly takes flight.

“The Starling” premieres on Netflix Sept. 24.