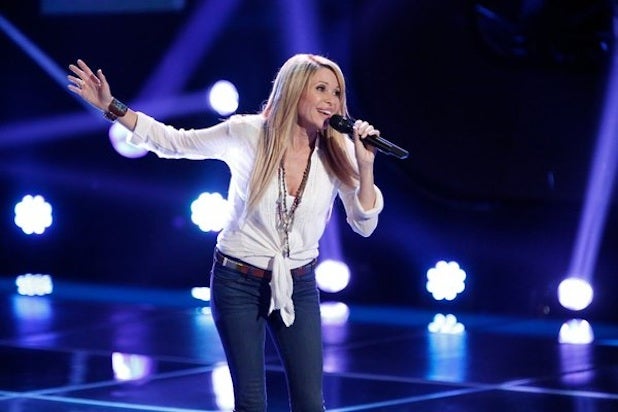 Season 5 of NBC’s “The Voice” has arrived (straight after a big Emmy win!). The original four judges are back in action, and here are some of my favorite moments from the two-night premiere. Let’s have a stiff drink and chat. This may take a while.

1. Facial hair alert. Adam Levine dabbled in facial hair last season, but no one could’ve predicted this wee lil’ beard. I would call this a Threat Level Orange. We should be concerned but not alarmed.

2. Sweetest pants. Kat Robichaud not only kicked off the first blind audition of Season 5 with a badass rendition of “I’ve Got The Music In Me,” but she also wore some sweet striped pants and gravity-defying platform boots that screamed Team Cee Lo. This was a match made in heaven.

3. Anything can happen. Caroline Pennell is like a slice of key lime pie – sweet and refreshing with a subtle kick. Her breathy, subtle take on “Anything Can Happen” was one of my favorite performances this week, earning her a spot on Team Cee Lo. Her charmingly adorkable personality also earned her a place in my heart, y’all.

4. Flattery will get you everywhere. I was all “Hells no” when Nic Hawk described himself as a cross between Amy Winehouse and Jessie J., but his performance of “Hit ‘Em Up Style” was spirited and fantastic (albeit nothing like the ladies above). When he proceeded to unabashedly flirt with Adam asking, “What’s going on, handsome?” my like turned to love. This guy is definitely bringing the party to Team Adam.

5. “Toddlers & Tiaras” on “The Voice”? Shelbie Z’s audition incorporated two of my favorite things – “The Voice” and TLC’s “Toddlers & Tiaras.” Her admission that she’s a part-time pageant coach filled me with glee, and her saucy rendition of “Here For The Party” had me cheering. Blake Shelton – this girl is a gem. Do NOT screw this up.

6. Why I still watch this show. At age 54, Donna Allen is a devoted mother, a former member of Miami Sound Machine and a killer vocalist who wouldn’t have a shot on other singing competitions thanks to our nation’s obsession with youth. Her performance of “You Are So Beautiful” was genuinely moving, and her chair turns made my heart grow three times bigger. It also spawned the sweetest moment of Adam losing his mind, doing push-ups on the stage and physically picking her up when she chose him. I’m a fan.

7. The heart wants what it wants. Josh Logan’s hat says 90s rocker, but his heart says Christina Aguilera. The amount of soul in his version of “Too Close” was surprising, and it may have been my favorite male vocal this week.

8. Best returning coach. Christina seems truly refreshed by her break from “The Voice,” while Cee Lo seems half asleep – waking up occasionally to sell himself to the contestants he’s fighting to have on his team.

9. Winning at life. Jake Worthington might be the most genuinely grateful person to NOT get a chair turn so far, responding to Blake with “Naw, dude, I’m so happy to be here man!” Now THAT is how it’s done, folks.

10. Most intense salesmanship. Matthew Schuler’s smooth rendition of “Cough Syrup” spawned the most spirited bidding war so far. Adam was climbing things. Christina was outright begging. Blake was basically saying he’d get laid if Matthew picked him. It’s like that time those guys tried to sell me a fake Birkin bag downtown, but with more choreography. In the end, Matthew couldn’t resist the siren song of Team Christina (and who can blame him?).

11. Brightest song choice. I don’t know who cleared Cole Vosbury’s version of The Jeffersons theme song “Movin’ On Up,” but they have my admiration. It was a ballsy, brilliant choice that earned him a spot on Team Ceelo. Coincidentally I do a mean version of this song on the wood whistle. Just think about that for a second.

12. Bromancing the stone. Bromance is in the air again for Adam and Blake who bicker and flirt like an old married couple. You guys, I’m gonna admit something – I missed this.

13. From voice-overs to “The Voice.” E.G. Daily might have one of the most interesting careers of anyone who has auditioned for this show. Not only have we seen her on-camera in “Valley Girls” and “Peewee’s Big Adventure” (YES!), but her voice is also recognizable from “Rugrats,” “Powerpuff Girls” and my personal favorite – “Babe.” Her tone was raspy and lovely on “Breathe,” and Team Blake is a great fit.

14. Best coach quote. This would be Blake with “Is Emo one of those big birds? Almost like an ostrich?”

15. Most photogenic couple. Tessanne Chin’s spectacular performance of “Try” yielded four chair turns and gave us the second best quote of the week – Blake’s “You’ve been to Jamaica, but have you been to the country?” She and her husband also win “Most Photogenic Couple,” because have you looked at them? Yeah. Team Adam was lucky to get this girl.

Leave some of your favorite (or least favorite) moments in the comments! Also, go check out my new album “In & Out of the Dark,” which is available on iTunes NOW: https://itun.es/us/2BjbP.