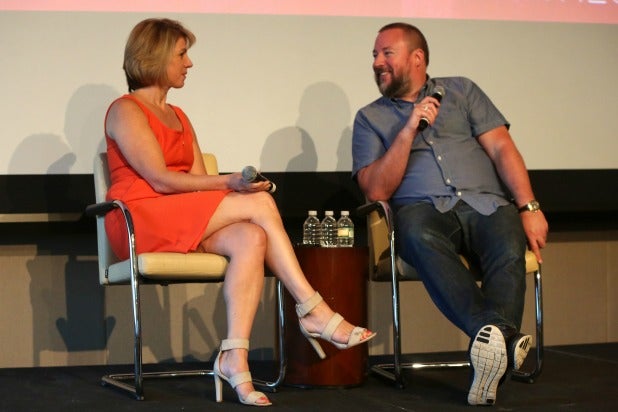 Vice CEO Shane Smith says his company has doubled in value since it was valued at $1.4 billion last year. And while he wouldn’t confirm Vice is in talks about Time Warner acquiring a stake, he did say it is “talking to everybody” about potential deals.

Smith spoke to TheWrap CEO and Editor-in-Chief Sharon Waxman at TheWrap’s The Grill conference on Thursday. The conference was held at 10 on the Park in New York City’s Time Warner Center — an interesting location given reports that Time Warner wants to buy a 50 percent stake in Vice.

Also read: TheGrill NYC: Red Bull Wants You to Stop Thinking of It as Just an Energy Drink Company

Smith demurred on many questions, and sometimes told jokes about eating instead. Waxman started off with questions about the potential deal, saying the panel was called TheGrill for a reason.

Then he said he couldn’t talk Time Warner.

Also read: How Advertisers Must Adapt in the ‘Era of the Selfie’ (Exclusive Study)

He added that Vice has doubled its top and bottom line in the last year. Waxman asked him: If he received $1 billion from Time Warner, what would he use it to become?

Smith has said previously that he wants Vice to be ten times as big as CNN, one of Time Warner’s many holdings.

“Vice,” which started as a Montreal punk magazine two decades ago, has since expanded into an international news operation with 34 offices around the world, a vast YouTube presence, and a show on HBO, another Time Warner property. Vice has 5,000 freelancers and 1,600 full-time staff.

Smith said his company was in talks not only with American companies, but international ones.

He said Vice is also interested in India, and mobile.

“As goes India, so shall go the world,” Smith said, noting that India has a vast, young population.

Waxman asked him about reports that in one version of the Time Warner deal, Vice could take over HLN. She asked if that appealed to him.

“A lot of things appeal to me. I like pizza, and hats. Dandelions,” he said, before adding: “I just can’t talk about it.”

But he added: “Am I interesed in television networks that have almost full penetration into the market? Yes.”

Waxman asked him about Vice’s knack for visiting the most dangerous places in the world, including North Korea.

“It’s the craziest place on earth, a hermit kingdom, and they want to nuke us. Why wouldn’t you want to go there?” he said.

He noted that some in the mainstream media look down on Vice, but noted that the BBC recently slipped into North Korea with a group of students. Some of those students have accused the BBC of putting them at risk.

“And then they look down on me and say, oh, that stunt journalist,” said Smith.

Smith said mainstream media has failed to reach Generation Y by offering “watered-down” news with 30-second ads in between segments.

In contrast, Vice offers deeply reported stories, and then brings in advertisers who have stories that are compelling to Gen Y.

“What we sell is engagement,” he said.

He also said he expects Vice to expand even more next year. How? He offered another joke.

“Lot of shoeshines,” he said.

“Half of my life is business, and the other half I get to do content,” he said. “If you’re gonna make cars, you’d better love cars.”