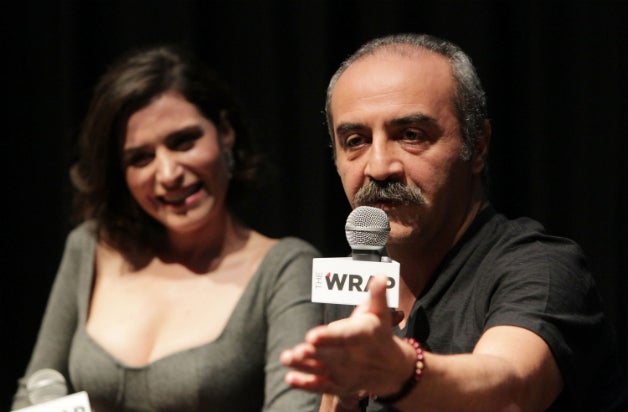 When he started making Turkey’s official Oscar entry “The Butterfly’s Dream,” writer-director Yilmaz Erdoğan set out to give life once again to two World War II era poets long forgotten by time and overshadowed by the circumstances of the age. By his estimation he succeeded – and much more. “They are forgotten, but we fixed it,” Erdoğan told the audience at Thursday’s screening, part of TheWrap’s foreign film screening series. The poets – Rüştü Onur and Muzaffer Tayyip Uslu – lived in poverty and died young, never fully realizing their dreams of achieving fame and fortune by the words they wrote. But, Erdoğan said, following the film’s release in Turkey last February, their poetry compilations rose to the top two spots in the country’s book sales. “After releasing [the film], their books became best sellers … and so the movie became, itself, a happy ending.” Also Read: TheWrap Screening Series: ‘Great Beauty’ Director on Pros and Cons of Being Called the New Fellini Actress Belçim Bilgin plays Suzan Ã-zsoy, the pretty young girl who initially serves as a muse for both poets. Even less is known about Suzan’s life at the time than the boys’, but Bilgin said she drew from common experience to act out the character’s arc from spoiled rich girl to one who understands hardship. “I recognize 19-year-old innocence,” said the actress, who is married to director Erdoğan. “‘Innocence.’ I love that word. It is a magic word … We are all innocent, but the world is not,” Erdoğan added. “Suzan is a symbol of today’s audience.” A poet himself, Erdoğan – who also wrote the screenplay for “The Butterfly’s Dream” – said he was drawn to bringing these two men out of obscurity for much the same reason as he uses other true stories for the basis of his films. “I love true stories because you are writing with God, your co-writer,” Erdogan said. “We need their words, their poems, their point of view.” Also Read: TheWrap Screening Series: Norway Oscar Entry ‘I Am Yours’ Doesn’t Shy From Our Selfish Nature What results is poetic storytelling, both visually and tonally. “The whole movie is about ugly things with beauty,” Erdoğan said. That theme carries through the film, which begins with beautiful, desaturated slow motion shots of compulsory laborers suffering in Turkish coal mines. But that look did not come cheap, Erdoğan said. The director reports a $15 million production budget, which he said is about five times the average Turkish film budget and the most expensive Turkish film by far. “It’s not easy to shoot period in Turkey,” the director said, referring to the 1940s wartime setting. The film’s crew had to create a makeshift studio on the Black Sea, and roughly a third of the finished film used green screen to achieve some of the period look. Watch a trailer for “The Butterfly’s Dream” here: