John Boyega, Jamie Foxx and Teyonah Parris are teaming up as an unlikely trio that stumbles across a shocking conspiracy in “They Cloned Tyrone,” a genre-jumping sci-fi mystery directed by “Creed II” screenwriter Juel Taylor in his feature debut which got its first trailer as part of Netflix’s Tudum showcase.

Boyega plays Fontaine, a neighborhood drug dealer who somehow survives being shot by his rival without a scratch on him. Alongside Yo-Yo (Parris) and local pimp Slick Charles (Foxx), Fontaine discovers that his neighborhood is being surveilled and experimented on by a mysterious organization that is trying to clone the Black population. 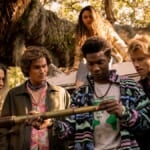 Dark as that subject matter might be — and reminiscent of real-life racist experiments such as the Tuskegee Syphilis Study — the trailer promises plenty of humor, including Slick Charles and Yo-Yo having a soulful duet with their guns as microphones before they break into one of the cloning labs. Another clip shows Yo-Yo trying to go undercover, only for someone to immediately recognize her.

A release date for “They Cloned Tyrone” has not yet been announced, but you can watch the first trailer in the clip above.