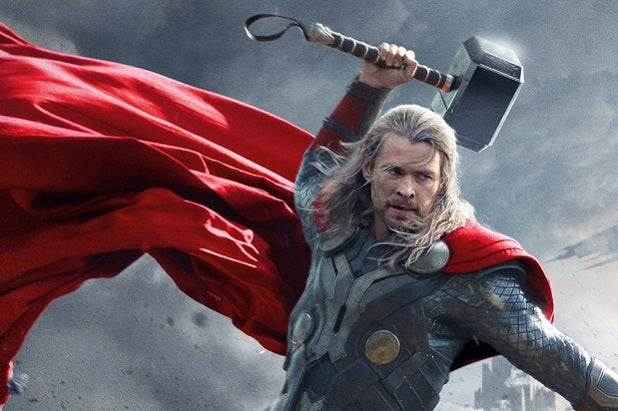 How big a hammer will “Thor: The Dark World” bring down at the box office when it hits 3,841 U.S. theaters Friday?

Disney projects that its Marvel superhero sequel should do $80 million, the tracking points to $85 million and the analysts say $90 million-plus – and won’t rule out it hitting $100 million.

There won’t be much competition; the other studios have cleared out and it’s the weekend’s only wide opener. It also will be getting a major boost from premium-priced showings, with more than 80 percent of its theaters offering 3D. It will be in more than 300 Imax locations and on 276 Premium Large Format and 131 D-Box screens.

“It’s going to be massive,” said Phil Contrino, editor-in-chief at BoxOffice.com, which is projecting a $95 million haul for the debut, which begins with 8  p.m. Thursday screenings.  “There has to be a ceiling, but after all that Disney and Marvel have accomplished, it’s tough to tell exactly where that is.”

Anything over $80 million will put the “The Dark World,” which has already brought in more than $133 million from overseas, on track to blast way past the $450 million brought in globally by the original film back in 2011. That one opened to $62 million domestically.

But that was before last year’s “The Avengers,” which featured “Dark World” characters Thor (Chris Hemsworth) and Loki (Tom Hiddleston), rewrote the box-office record book with the biggest U.S. opening of all time and went on to take in $1.5 billion worldwide.

“Iron Man 3” played like a sequel to ‘The Avengers” and “The Dark World” will too, say the analysts, who see a $650 million worldwide haul as within its range. Disney puts the production budget at $170 million.

The indicators are all trending up for “The Dark World.”

The tracking has stayed consistently strong. The reviews have been generally favorable, with a 75 percent positive rating on Rotten Tomatoes. Its social media signs are very strong, and its Twitter mentions are outpacing those of “Iron Man 3.” As of Wednesday, it was accounting for more than 85 percent of weekend sales at online ticket site Fandango.

Sixty percent of the “Thor” grosses came from overseas, and that number will likely rise with “The Dark World,” in part due to the expansion of several key foreign markets. It opens on Friday in China, and by the weekend will have debuted in every major global market except Japan, Argentina and Italy.

While there are no other wide openers, two movies are expanding nationwide this weekend.

Fox Searchlight is expanding Oscar hopeful “12 Years a Slave” from 410 theaters to roughly 1,100 locations on Friday.

A strong response from art house and African-American moviegoers has “12 Years” off to a fast start in its first three weeks of limited release, and it will have brought in more than $10.5 million by Friday.

And Universal is taking the romantic comedy “About Time” nationwide into about 1,200 theaters after rolling out the Richard Curtis time-travel tale in 175 theaters to $1.1 million last weekend. The studio is looking for an opening in the $5 million range.

“About Time“ has already opened in 42 international territories and grossed $34.8 million to date, with 15 markets still to open.

Fox is rolling out its PG-13-rated drama “The Book Thief” in four theaters, two in New York and two in L.A.

It’s set in World War II Germany, where young Liesel (Sophie Nelisse) finds solace by stealing books and sharing them with others while her adoptive parents shelter a Jewish refugee. Emily Watson and Geoffrey Rush co-star in “The Book Thief,” which was adapted from Markus Zusak’s novel by Michael Petroni. Brian Percival, from TV’s “Downton Abbey,’ is the director.