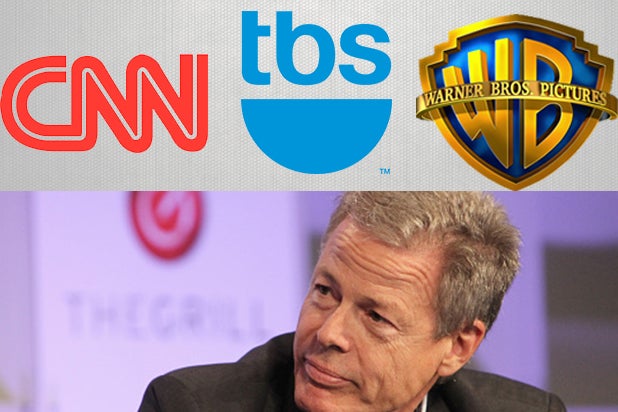 It was an extraordinary day for Time Warner. Even as high profile cancellations were unfolding at the CNN news division, CEO Jeff Bewkes was out in public promising shareholders he would double earnings at the media giant in the next couple of years.

How would he do that? By doing more with less. Time Warner executives have been saying this for some time, but on Wednesday, the company unrolled an execution strategy in a remarkable display of action matching up with their words.

In a single day, all these things unfolded:

The overall idea, said Martin, is Turner is “freeing up capital by making our existing operations more efficient.

At the same time, said Tsujihara: Warner is “doubling down on outstanding content.”

And with the plan to make an ambitious number of movies and television shows, that is exactly what they appear to be doing.

Up to now, legacy content companies have paid lip service to the easy-to-say, hard-to-do nostrum of “doing more with less.” Most end up cutting and cutting, but find it extremely hard to innovate while doing so. And so they end up cutting their way to mediocrity, and from there, irrelevance. So how is Time Warner different?

In this case, Time Warner appears to be cutting with a plan to innovate around business models that will work. Expanding HBO’s reach – a true crown jewel in media if ever there was one – is a smart strategy. CEO Richard Plepler says the plan is to go after the 80 million homes that don’t get HBO – and especially the 10 million young’uns who have already cut the cord and (gasp) don’t have cable. There is significant untapped growth there for what had appeared to be a mature media division.

The move also struck hard at Netflix, which suffered a sharp drop in share price after the HBO announcement despite hitting earnings forecasts.

Bewkes defended CNN as the “gold standard” in news, which is a nice thing to say, but in fact the network is investing in produced series that have library value, and can produce ancillary income that real-time shows like “Crossfire” cannot. (That was canceled too.) Real-time news is likely to be the casualty. You can’t cover more news with less people – but you can make more shows.

When Martin vows to double the amount of original series in 2015, those new series will likely find their homes on the CNN schedule in the recently vacated slots formerly offering sports, entertainment, medical, and business, both during the week and weekends.

Series like “Anthony Bourdain: Parts Unknown,” “Somebody’s Gotta Do It,” and “The Hunt” can be repeated over, and over, and over again–everywhere from second screen devices to airplanes.  Along with a spike in its ratings during typically dominated CNN-dominated breaking news stories, the network is betting that being a blender mixed with hard news and original series with familiar faces  will help revive the network’s brand.

The movies in which Warner Bros. is investing are proven franchises from the maker of Harry Potter, from the unused archive of superhero characters and from a proven animated hit. Similar to the Disney model, this approach will feed their library, future boxed sets, binge viewing on Netflix or other streaming services – and feed consumer products to boot.

The shift going on at Time Warner is painful, but in hindsight will show a resolve to resize the company according to the new requirements of the internet-driven media economy.

As Bewkes made clear when he appeared at TheWrap’s Grill conference last week, Time Warner is focused on being a content company in the purest way possible.

On Wednesday, he showed how he plans to deliver growth in what most consider a mature industry.

Jordan Chariton and Tony Maglio contributed to this story.