Jerry Bruckheimer is a Hollywood legend. His killer instinct, uniformly good taste and innate understand of what audiences desire has led to franchises like “Beverly Hills Cop” (with his late partner Don Simpson), “Pirates of the Caribbean,” “Bad Boys” (also with Simpson) and “National Treasure.” He’s also had just as many notable one-off favorites – “The Rock,” “Flashdance,” “American Gigolo,” the list goes on. And for a while it looked like “Top Gun” was following into that latter category, an all-timer but one that stood alone.

That is, until Bruckheimer launched, with Tom Cruise and director Joseph Kosinski and producer/writer Christopher McQuarrie, “Top Gun: Maverick.” Against all odds, it arrived 36 years after the original. And, perhaps most improbably, it led to Bruckheimer’s first Best Picture Oscar nomination. “Hope for the best but expect the worst,” Bruckheimer said about his outlook Tuesday. “And this time we got it. It’s fantastic.”

In “Top Gun: Maverick” Cruise returns to the role of Pete “Maverick” Mitchell, this time recruited by Top Gun to train a new group of pilots to fly a dangerous, seemingly suicidal run in an enemy country. It’s a story about age and death and legacy, themes that resonated with audiences, especially when packaged in a rousing action movie framework (the movie made nearly $1.5 billion worldwide). And in the same way Maverick returned to what made him so special, Bruckheimer returned to a beloved property that hadn’t been touched for three decades. For both of them, it could have ended in disaster. 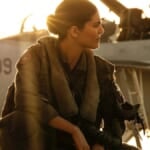 Instead, it has felt like a victory lap for Cruise and Bruckheimer, capped off by this morning’s nominations.

“Honestly, I feel great. It’s so terrific when you get recognized by your peers. We make movies with them and for them and it’s thrilling when they see that the hard work that goes into making all of these various movies,” Bruckheimer said. “It was a combination of Tom and Joe [Kosinski] and [Christopher] McQ[uarrie], everybody brought a little piece of what they’ve learned through their history in the film business in their experience. And the Academy recognized all the hard work and excellence that went into making the film.”

Bruckheimer says that much of the film’s commitment to excellence can be traced back to Cruise.

“Tom always said, ‘We’ve got to hit a bullet with a bullet.’ And he didn’t want to compromise on anything,” Bruckheimer said. “All the actors trained to be in the jets so that they could take the G-forces. They put the hard work in and now we’ve got the accolades from our peers.”

And Bruckheimer is feeling the love from other people, too. The producer was approached at the funeral of a colleague by a young woman who said the company where she worked was having a contest for who has seen the movie the most times. The young girl won. She’d seen it 25 times. Bruckheimer then recounted an even more powerful story: “I had another girl come up to me at one of our screenings here and she said, ‘My dad was so depressed, he was suicidal. And I took him to see Top Gun and he’s got a whole new lease on life.’” That’s right – “Top Gun: Maverick” saves lives.

But given the oversized success of the film (both critically and commercially), is Paramount clamoring for another sequel?

“A lot of people talk about it,” Bruckheimer said. “But Tom is off doing two ‘Mission: Impossible’ movies and he’s out there risking his life as he usually does, unfortunately. But we haven’t had a discussion with him about it yet.” Not that he’s totally ruling out the possibility. “You always like to make movies that entertain audiences, if we can come up with a way to bring another one back, of course. Why wouldn’t we? Look, it took us 35/36 years to get this one done. You never know.”