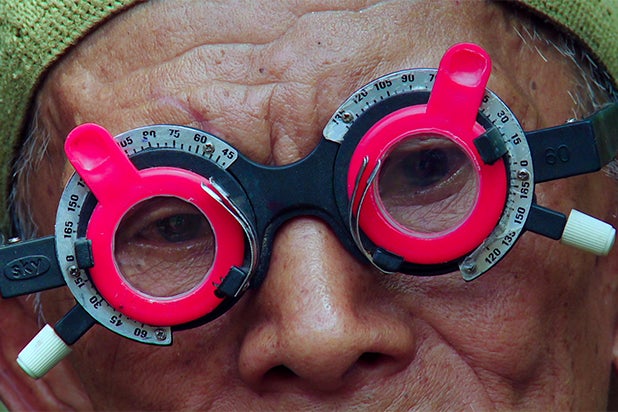 This year’s doc lineup in Toronto includes work from such titans as Frederick Wiseman (“National Gallery”) and Martin Scorsese (“The 50 Year Argument”). But three of the most high-profile nonfiction films at the fest are also three of its darkest: Joshua Oppenheimer‘s “The Look of Silence,” his followup to the Oscar-nominated “The Act of Killing” (photo above); Robert Kenner‘s “Merchants of Doubt,” a politically-charged film from the director of “Food, Inc.”; and Nick Broomfield‘s “Tales of the Grim Sleeper,” a chronicle of the serial killer who preyed on women in South Central Los Angeles for decades.

“The Look of Silence” is very much a companion piece to “The Act of Killing,” as the similar titles suggest. In both films, Oppenheimer investigates the Indonesian genocide of 1965, in which the military government contracted local gangsters to carry out the mass killings of communists, labor unionists and many others who opposed their policies. Those gangsters were then rewarded with power, which many of them still hold.

“The Act of Killing” was surreal and disturbing, because the perpetrators insisted on acting out their murders in the style of movies they loved; rewarded with impunity, they considered themselves heroes, not villains, and boasted for Oppenheimer’s cameras. The film was all about the killers, because the filmmaker said few survivors or victims’ family members felt safe talking about what had happened.

“The Look of Silence” turns the focus to some degree to the families and the survivors. Perhaps emboldened by the visibility of Oppenheimer’s first film, one family in particular begins to confront the men responsible for the brutal killing of their son nearly half a century ago. The dead child’s parents have clearly never recovered from the murder, while their surviving son — who wasn’t born until two years after his brother was killed — calmly quizzes the perpetrators about their roles in the massacre as he fits them for glasses.

Some of the killers in “The Look of Silence” act the same way the killers did in the earlier film, boasting about what they did and acting it out. Others simply don’t want to talk about it, and blame the victim’s family for dredging up the past. Others resort to threats.

More straightforward, less hallucinatory and less artistic than “The Act of Killing,” “The Look of Silence” is still a powerful piece about memory and impunity, and it gives Oppenheimer a chance to become the first documentary feature filmmaker to be Oscar-nominated in consecutive years since Walt Disney in 1953 and 1954.

Robert Kenner is also a former nominee, with 2009’s “Food, Inc.” His new film, “Merchants of Doubt,” tackles a fascinating subject: the so-called experts who are routinely trotted out to cast doubt on the science behind issues like climate change.

Kenner draws a connection between current spokespeople who promote a “the science isn’t all in yet” policy toward climate change, and ones who in the past tried to deny that cigarettes were harmful. He points out the ties between the doubt-mongers and the industries fighting against regulation, and effectively shows how they’re working from a playbook established by the tobacco industry decades ago.

“Merchants of Doubt” doesn’t pack the punch of “Food, Inc.”: The target is more elusive, the most damning parts of the film are the ones about what tobacco companies did decades ago, and sequences comparing the hired spin-masters with the tricks of professional magicians feel forced.

But it peels back the curtain on a host of unsavory tactics and exposes some of those who use them — even if it shows, sadly, that those who aren’t predisposed to go along with Kenner’s viewpoint are likely so intractable that no movie is going to change their minds.

“Tales of the Grim Sleeper,” which was  bought by HBO out of Toronto, is the latest film from Nick Broomfield, the British documentarian whose other work includes “Aileen Wuornos: The Selling of a Serial Killer,” “Heidi Fleiss: Hollywood Madame,” “Kurt & Courtney,” “Biggie & Tupac” and “Sarah Palin: You Betha!”

Broomfield is always front-and-center in his own movies, often to the detriment of the stories he’s trying to tell. He does that to a degree in “Grim Sleeper,” in which we ride around South Central with the director as he talks to people who knew Lonnie Franklin Jr., who is charged with the murders of 10 women but may well be responsible for hundreds more.

We see Broomfield driving, interviewing, being pulled over by the cops for not wearing a seat belt and asking occasional questions that make you cringe.  But while an obsessive focus on the filmmaker just about ruined his Sarah Palin movie, here it’s less obtrusive; the naïve outsider turns out to be an effective guide into this story.

And the story gets stranger and darker in the telling. At first, neighbors defend Franklin and insist he’s innocent — but as time goes by and they become accustomed to Broomfield, they begin to tell chilling stories that give the impression that many of Franklin’s friends and neighbors knew for decades that he was at least abusing and torturing women, and maybe that he was killing them.

“You could tell that it was blood,” says a man hired more than once to clean the carpets in Franklin’s van. But his next line is damning: “I didn’t think anything of it.”

It is a damning chronicle of the ways in which people choose to look the other way — and it’s a damning indictment of the Los Angeles Police Department, which comes across as negligent or even uninterested in solving the murders of street prostitutes and crack addicts.

The big hole at the center of “Grim Sleeper” is that Broomfield didn’t get an interview with Franklin or his wife, and that nobody in the LAPD would speak to him. The central characters are missing from his movie, so the director tells it from the fringes. But the view from those fringes is absolutely chilling.