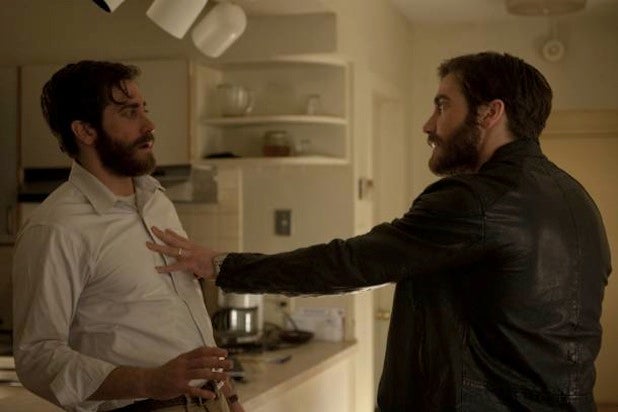 UPDATE 5:29 p.m. PT: Lionsgate is not in the running at this time, as this post had previously indicated. The story and headline have been written through to reflect that.

PREVIOUS: A three-way scrum for Jake Gyllenhaal‘s buzzy Toronto title “Enemy” is under way, TheWrap has learned — with a deal expected to close by Wednesday night.

A24, The Weinstein Co. and Focus were nearing the finish line on a deal in the low seven-figure range. Positive reaction and reviews touched off the multi-day auction that began after its weekend premiere.

Based on the José Saramago novel “The Double,” the thriller from Canadian director Denis Villeneuve (“Incendies,”  “Prisoners”), “Enemy” finds Gyllenhaal playing a college professor in a mundane life – until he spots his exact double playing a bit part in a movie. He tracks down the small-time actor (also played by Gyllenhaal), sparking a mutual obsession.

Gyllenhaal was in Toronto for the Sunday premiere at the Ryerson Theatre — two days after he was on the Canadian red carpet for “Prisoners,” which he also made with Villeneuve. That film is being distributed by Warner Bros.