“Without people who are appalling, there would be no drama,” said “12 Years a Slave” director Steve McQueen on Saturday afternoon at the Toronto Film Festival – and a day after McQueen’s movie premiered, plenty of TIFF offerings had abundant drama (plus a few laughs) courtesy of appalling people and bad behavior.

Take the female protagonists in Jason Reitman‘s “Labor Day” and Catherine Breillat’s “Abuse of Weakness,” two films where you could feel the audience spend much of the movie thinking, “Why the hell is she doing that?” 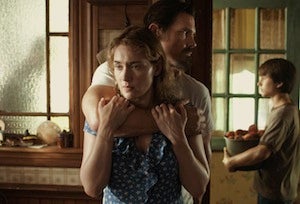 In the case of “Labor Day,” the thoughts were prompted by the eagerness with which Kate Winslet‘s character goes from being terrified of the convicted murderer who escapes from prison and hides out with her and her seventh-grade son to to being ready to a run off with him to Canada.

(Granted, he talks gently, waxes the floor, changes the oil, fixes a loose floorboard, plays catch with her son and bakes a mean peach pie – he’s pretty much the perfect man, as long as you ignore the murder conviction.)

Shorn of wise-crackers and fast-talkers, the film is a dramatic change for Reitman, an unsettling look at the profound neediness that can draw the unlikeliest of people together.

And Reitman told TheWrap on Saturday that the idea that Winslet’s character acted inexplicably was one of the things that drew him to the project.

“It’s the only reason to make a movie like this,” he said. “I’ve always been drawn to characters who make inexplicable decisions, and confronting the audience with tricky decisions like that.  The first movie I ever made [“Thank You for Smoking”], the hero was a lobbyist for big tobacco, and it’s been the same with every film: pregnant teenage girl, guy who fires people for a living, woman who’s trying to break up a marriage … These are my heroes.”

In the case of Breillat’s French-language film “Abuse of Weakness,” the main character, played by Isabelle Huppert, is a director slowly recovering from a debilitating stroke. She becomes obsessed with an admitted con man, casts him as the lead in her next movie and bankrupts herself loaning him nearly a million euros.

What makes “Abuse” particularly disquieting is that it is essentially autobiographical: Breillat herself suffered a stroke in 2004, decided to cast a con man as the lead in her next film, and loaned him large amounts of money.

In the film’s final scene, Huppert tries to explain to her family why she did it, and falls back on repeating, “It was me, and it wasn’t me.” By the end of the scene, Huppert is no longer looking at the other actors, but is staring straight into the camera – at which point it’s clear that she has become Breillat herself, trying in vain to explain to her audience why she did what she did.

The Breillat film also fits with another trend at this year’s festival: films based on true stories. We’ve had Benedict Cumberbatch playing Julian Assange in “The Fifth Estate,” Daniel Radcliffe as a young Allen Ginsberg in “Kill Your Darlings,” Chiwetel Ejiofor as Solomon Northrup in “12 Years a Slave,” the panoramic true story of “Parkland” and many others.

And on Saturday night, TIFF premiered Canadian director Jean-Marc Vallee’s “Dallas Buyers Club,” with Matthew McConaughey as Ron Woodroof, a reflexively homophobic Texas man who unwittingly aligned himself with the gay community when he was diagnosed with HIV and began smuggling in drugs that were legal in Mexico but not approved by the FDA.

Woodroof is hardly a paragon of virtue; he’s a guy who chases his AIDS medication with beer and cocaine and then hits the strip clubs. But this means he’s a role that McConaughey can sink his teeth into – and the actor, who’s already in the awards conversation with this year’s “Mud,” is as electric as advertised in Vallee’s jittery, energized movie.

McConaughey’s much-touted weight loss is scary, especially in a courtroom scene near the end of the film where he appears downright skeletal. But the performance never comes across as a stunt – and Jared Leto, as a gay man who becomes an unlikely ally and unlikelier friend, is just as startling.

Also read: Jared Leto on How He Lost 40 Pounds for AIDS Role: ‘I Stopped Eating’

“The Railway Man” is another TIFF film that draws power from the fact that it’s a true story. Directed by Jonathan Teplitzky and in Toronto looking for distribution, the film stars Colin Firth as Eric Lomax, a World War II vet still haunted by his experiences in a Japanese prison camp on the Thai-Burma Railway. With the urging of his wife Patti (Nicole Kidman), he makes his way back to Singapore, a former torturer is now a tour guide at the prison camp-turned-museum.

It takes the film too long to get there, and something about the confrontation seems too pat, but Firth and Hiroyuki Sanada are gripping as old  adversaries both haunted by memories of what took place.

And the knowledge that Lomax is a real vet who did confront and later become friends with his captor gives the film a real emotional punch. Both Lomax and Japanese prison guard Takashi Nagase have died, but Patti Lomax came to the film’s Friday-night premiere.

Back on the subject of bad people, meanwhile, Jason Bateman’s “Bad Words” made a splash at the festival on Saturday morning when it sold to Focus Features just before its second press and industry screening. It’s not a typical TIFF movie and it’s certainly not an awards picture; instead, “Bad Words” is a movie for anybody who figures that behind the scenes of a spelling bee must be an unholy mess of ego, backstabbing and jealousy.

Bateman plays a 40-year-old grade school dropout and spelling whiz who, for reasons that we learn eventually, takes advantage of a loophole to enter the national spelling bee in an attempt to win and embarrass the entire enterprise. He’s foul-mouthed and rude and underhanded and despicable in a way that is intermittently funny, if not quite as offensively hilarious as you might hope.

The crowd trying to exit Bateman’s movie ran into something even more horrifying at Toronto’s Scotiabank multiplex. So many pass holders had showed up to try to get into an industry screening of “Gravity” that it was essentially impossible to enter or exit the theater – lines and masses of people clogged every available stairway and corridor, to the point where trying to leave the building became a nightmare on a scale that even veteran festivalgoers could never remember encountering before. (It’s a good thing no fire marshalls decided to drop by.)

And that was just one industry screening in a 500-seat theater. “Gravity” makes its public debut on Sunday night in a theater three times that size; assuming we’re not crushed by the marauding hordes, TheWrap will have a report afterwards.