The first trailer for director Ruben Östlund’s “Triangle of Sadness” is here, and it shows Woody Harrelson as a cruise ship captain sent overboard by his passengers, first metaphorically before the whole boat winds up literally marooned and shipwrecked.

“Triangle of Sadness” won the Palme d’Or at this year’s Cannes and will play at TIFF next month, and ahead of that Neon dropped the first look at the film that is a wicked satire of the uber-rich and celebrity- and image-obsessed world of fashion.

And while this trailer pokes fun at a lot of folks and gives a broad sense of the plot, it lingers on one scene with Harrelson in which he explains to a passenger that it would not be possible to wash the boat’s sails… quite simply because as a motorized boat, it does not have them. 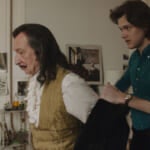 Harris Dickinson and Charlbi Dean ultimately lead the cast of the film as a celebrity model couple that witnesses their unhinged boat captain lead them on a cruise that starts out Instagrammable and ends catastrophically, leaving the survivors stranded on a desert island and fighting for survival.

The official poster for the film also plays up its gross-out humor, though the first trailer only hints at the vomit-soaked images that riled up the Cannes crowd.

Neon will release Östlund’s “Triangle of Sadness” following its TIFF premiere in theaters on October 7. Check out the first trailer above and the gross-out poster below. 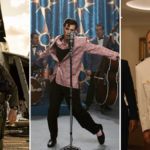 Also Read:
Oscar Race at the Halfway Point: Have We Seen Any Real Contenders Yet?