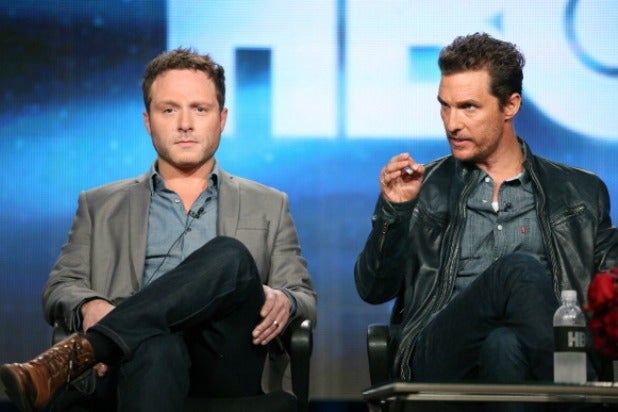 As Pizzolatto recently told TheWrap, he was carrying out the vision of “The Killing” creator Veena Sud when he worked on the episode that infamously failed to reveal who killed Rosie Larsen.

Did he learn anything from “The Killing” about how to resolve a murder mystery? “No, not really,” he said.

One reason: He had already plotted out “True Detective” by the time he joined the AMC show.

“When you work on a show as a staffer, your job is to serve the showrunner’s vision,” he explained at the Television Critics Association winter press tour. “So, you know, there wasn’t much ownership for me of it. But I think my ideas about a mystery and how to handle these sorts of things just came out of my own sort of ethos and concerns as a writer, more than anything.”

He said “True Detective” would come to a definite conclusion.

“I mean, one of the reasons I wanted to do an anthology format is I like stories with endings,” said Pizzolatto (pictured with “True Detective” star Matthew McConaughey.) “I like a good third act. And continuing serial dramas, they tend to have really good beginnings and really long middles and then sort of have to hustle to develop an ending. And I like the idea of telling a self-contained story.”

One sign Pizzolatto sticks the landing with Sunday’s episode? His actors — including McConaughey, Woody Harrelson, and Michelle Monaghan — were able to read all eight of his episodes before signing on. They probably wouldn’t have if the final episode blew it.