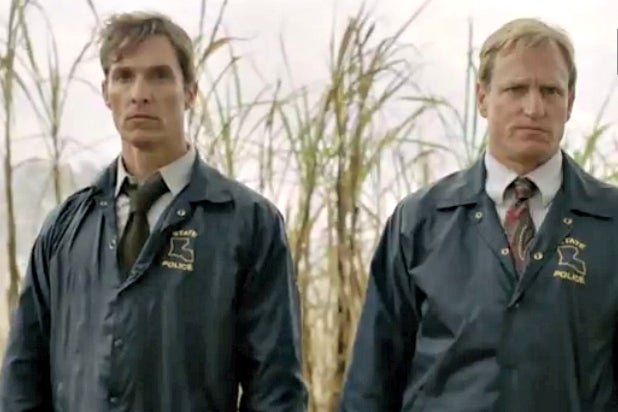 You may already be revved up for the premiere of “True Detective” because of it’s A-list cast or strong reviews. But do yourself a favor and temper your expectations, because HBO’s crime anthology wants to earn your respect.

The presence of Matthew McConaughey, Woody Harrelson and Michelle Monaghan – all excellent, by the way – may make you expect an explosive show right from the start. But Nic Pizzolatto’s script and Cary Fukunaga’s direction slowly, methodically earn every big moment. And when those moments arrive in the third episode, they’re legitimately terrifying.

So slow down to the speed of McConaughey’s drawl. Take out a thick notebook like the one he carries through the show. Pay close attention, and remember everyone’s name. It will pay off.

This is a very, very unusual show, and would be even if it didn’t have three movie stars turning to TV while their film careers are running hot. Pizzolatto is a novelist who served briefly as a staff writer on AMC’s “The Killing.” HBO has given him remarkably free rein to write every episode of this anthology, which will have a new story, cast and setting each season.

Is Pizzolatto insanely lucky? Does his dad run the network? No – he’s just a very different kind of writer, and HBO deserves a lot of credit for having the confidence to let him do what he does. Like a rangy, idiosyncratic novel, the story takes strange, slow turns, and we don’t realize how they pay off unless we’re really engaged.

Though the show was initially set in the Ozarks, Pizzolatto agreed to move it to Louisiana, his home state, in part because of the state’s generous tax benefits. It’s hard to imagine it anywhere else. No other state has the same mix of eerie mix of religion, violence, easy sexuality, and mystical menace. It’s a seductive and frightening place, packed with more life and almost anywhere else, and “True Detective” seems to this outsider to get it right. There aren’t any alligators or Mardi Gras beads or any of the usual clichés – when the detectives stop for lunch, they eat Vietnamese.

McConaughey and Harrelson play detectives in 1995, when they’re solving a horrific murder, and in 2012, when they’re being questioned about a crime that seems similar. Both have transformed completely over the years, seemingly fulfilling the most disappointing versions of the men they were in their younger years. Both were full of secrets then, and those secrets have spilled out now. McConaughey’s character has given up on trying to impress people, but Harrelson’s, pathetically, has not. Something has happened to bust up their fragile partnership.

Maybe it’s Harrelson’s wife, played by Monaghan. She’s the show’s secret weapon, the person who pierces McConaughey’s brittle shell and tries to crack her husband’s. I hope she doesn’t die. But I feel like “True Detective” won’t do anything viewers see coming, even with the benefit of 17 years’ perspective.

We’ve started calling every film with a serial killer a psychological drama, but “True Detective” really is one. It’s about whether our lives really matter at all.

That’s scarier than the scariest monster.

But then the show gives us a glimpse at the monster. And things get scarier still.