During that time, Trump once again targeted “Morning Joe” on MSNBC, misnaming the hosts and claiming that they are “Trump deranged.”

This isn’t the first time Trump has tried to call out the morning show hosts this month. In fact, he made a similar claim less than a week ago. 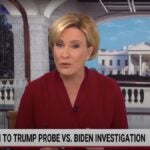 Trump wrote at the time, “Will Morning Joe be canceled? He and Mika’s ratings are very low—they are having an extremely hard time finding an audience to listen to the Fake News they spurn. Losing them would be very sad—hope it doesn’t happen!”

In response, host Joe Scarborough mocked Trump’s choice of words for the post and laughed it off, saying “he can’t quit us!”

Following his post about “Morning Joe” this week,” Trump went on to write several posts complaining about the special counsel assigned to oversee one of the many investigations into him, before reposting multiple memes from one user, mostly praising his golf skills. 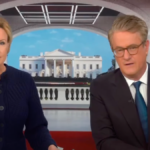 Also Read:
‘Morning Joe’ Says ‘Both Parties’ Should Want the Truth of Biden’s Docs: ‘Nothing Stupid About’ Needing to Know (Video)
x