“Turning Red,” Pixar Animation Studio’s 25th feature film, premieres directly on Disney+ on March 11. And in advance of the film’s release, TheWrap was able to screen about a half-hour of footage from the Domee Shi-directed film. While much of the plot remains damnably out-of-reach, the first half-hour establishes the tone and look of “Turning Red” to a remarkable degree. And it’s safe to say that this is one of the most astounding looking (and feeling) Pixar movies yet. Quite frankly, you’ve never seen anything like it, from Pixar or anywhere else for that matter.

Right off the bat, you can tell this is different. Our lead character, Mei Lee (Rosalie Chiang), is a 13-year-old Chinese girl growing up in Toronto at the turn-of-the-millennium. She’s dorky but confident, directly addressing the camera in the style of “Ferris Bueller’s Day Off” or any number of edgy teen-oriented shows from the early-2000s, and she even acknowledges the movie’s title card (again, a first for Pixar). She rides the bus, points out the Tamagachi dangling from her backpack, and confesses to being obsessed with a boy band called 4*Town (which, of course, has five members). She introduces us to her equally oddball cadre of girlfriends and her family, who own and operate a temple whose spirit animal is the red panda. (Sandra Oh plays Ming, Mei’s stern but very loving mother.)

Of course, if puberty wasn’t enough, one day she turns into a giant red panda. (Hilariously, her mother first assumes that she is hiding because she has gotten her first period. One of the filmmakers described the panda as the “adorable metaphor” for change.) The panda design is outstanding (somewhere there are folks at Disney Consumer Products salivating at the amount of plush they are going to sell) and the awkwardness is almost overwhelming. This is a truly magical coming-of-age tale, which makes it something of a cousin to last summer’s immaculate “Luca,” although “Turning Red’s” modernity and extreme stylization sets it apart. 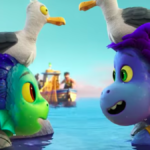 Shi described the movie’s style as “Asian tween fever dream,” inspired by her love of cuddly anime like “Sailor Moon,” and you can definitely feel that throughout the footage – mouth and eye shapes change dramatically in ways that would be deemed “too cartoon-y” in other Pixar movies; there are flourishes of hand-drawn animation; fantasy sequences creep into the mundane; and everything is heightened, from Mei’s father making a delicious dinner in sumptuous slow-motion, to the way that the gaggle of girls seemingly move as one. It’s striking – you can tell you are looking at something certifiably new – but it’s never distracting. And it makes perfect sense for the world that is being built by “Turning Red.”

And it would be one thing if it was simply stylization for stylization’s sake. But this being Pixar, you know that it has to ladder back to story and character. And “Turning Red” has this bedrock of completely relatable, very messy human emotions. There’s a moment in the first 30 minutes when Mei is hidden away in her room, drawing, er, romantic versions of the boys in the boy band. Pixar characters may have expressed love for one another in the past, particularly in the more overtly relationship-driven films, but this is probably the first time since the original “Incredibles” that sex has actively been invoked. It double-underlines that, while the characters can become very stylized and the scenario involve something quite magical, these are real-life human beings at the heart of it. And their awkwardness is endearing.

“Turning Red” seems, at least so far, to be a potential watershed Pixar production. Not only is it the first Pixar movie directed solely by a woman, but the entire leadership team of the production (from producer Lindsey Collins through the art and story departments) is female, leading to an altogether different and totally singular vibe. And that difference in leadership has translated to a movie that looks and feels quite different from anything that the studio (which seems to be going through a little bit of a renaissance at the moment) has produced before. 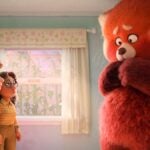 Since we have only seen the first 30 minutes of Mei’s journey, and don’t know how she is going to navigate the pressures of regular teen life (not to mention giant panda teen life), but it seems like one of the more unforgettable adventures Pixar has concocted. And that’s saying a lot.

“Turning Red” hits Disney+ on March 11 and we’ll have plenty more before the film’s release.