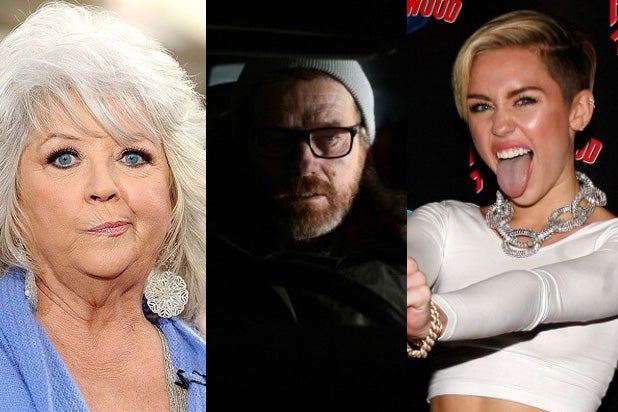 Spectacular flameouts and unlikely triumphs flickered across the nation’s living rooms this year, from cancellations to shocking success stories. With 2013 roaring to a close, TheWrap separates the successes from the failures.

anny McBride), “Eastbound & Down,” HBO
Kenny rose like a phoenix from the third and almost final season of “Eastbound & Down” to regain his fame, fortune and balls in the fourth. And good, because Season 4 was arguably the best yet. The finale — including cameos from Sacha Baron Cohen, Lindsay Lohan and Alexander Skarsgård — was more spectacularly ridiculous than any fan of McBride, Ben Best and Jody Hill’s creation could have ever imagined. — Greg Gilman

Winner: Fox News
Already the most-watched cable news network, Fox News made some successful lineup changes this year. Megyn Kelly moved from 1 p.m. to 9 p.m. with “The Kelly File” in October, winning its timeslot in cable news with 2.1 million total viewers with its premiere, and growing the next night. The recruitment of “The View” refugee Elisabeth Hasselbeck for “Fox and Friends” gave the morning show a viewership boost. In November, Fox News took second place in primetime for all of cable, behind only ESPN.  — Tim Kenneally

Loser: “The X Factor”
We all had higher hopes for truth-sayer Simon Cowell, but his “post-Idol” talent show has never lived up to his old show. After exhausting us for two seasons with his “Hunger Games” of musical judges, he settled on a panel that was the casting equivalent of “mom jeans” for Season 3. Has he given up? At least half the fans have. The current season has seen a dramatic drop from more than 12 million viewers for Season 1 to less than 5 million this season. Is it time for Fox to cut its losses and focus on the makeover of “American Idol”? – Jethro Nededog

Winner: “Sharknado”
The Syfy TV movie about sharks attacking via hundreds of sling-shotting tornadoes took the world by storm (pun intended) this summer. Bolstered by a can’t-miss trailer and the so-bad-it’s-good plot, the Ian Ziering/Tara Reid movie became a social media sensation. After taking over Twitter, the telecast actually got some viewers. Encores of “Sharknado” kept growing their audiences. The phenomenon even birthed midnight theater showings in New York and Los Angeles, along with a red carpet for the latter. “Sharknado 2” was immediately greenlit, and fans got to name the sequel. Next year’s “Sharknado 2: The Second One,” will terrorize New York. --Tony Maglio

Loser: First Casualties of the Fall
Remember “Lucky 7” or “We Are Men”? No? Well that makes sense, because they each only aired two episodes this fall before getting the ax. “Lucky 7” had the worst fall drama debut in ABC history, earning a 1.3 in the advertiser-coveted 18-49 demographic. Its second — and final — episode received a 0.7. Goodbye. “We Are Men” had the lowest comedy debut in CBS history with a 2.0 rating. Adios. –Tony Maglio

Winner: “Breaking Bad”
In its final season, the methamphetamine epic went from being quietly brilliant to a full-fledged hit. The finale earned 10.3 million viewers, up nearly 4 million over its previous high. What those viewers saw was perfection: Teacher-turned-meth kingpin Walter White mowed down a Nazi ranch in one of the greatest TV endings of all time. Sweeter still, the show got its due while it was still on the air, winning the Emmy for Outstanding Drama Series on the Sunday night before its final cook. –Tim Molloy

Loser: Paula Deen
America’s butter queen, Paula Deen, suffered a career meltdown when a lawsuit filed by a former employee unearthed the fact that she had previously used the N-word. After awkward apologies failed to quell the growing outrage, Deen’s business associates crumbled away like the crust of a shoddily constructed pumpkin pie. The Food Network, Walmart, Target and a host of others cut ties to Deen, who was ultimately cleared of the racial discrimination claim in the lawsuit, which was eventually resolved. –Tim Kenneally

Winner: NBC
Jay Leno might need to drop the ratings jokes from his monologue: This fall, NBC is the top-rated network in the key 18-49 demographic, and is No. 2 behind CBS in total viewers. It can thank “The Voice,” “The Blacklist” and “Sunday Night Football,” TV’s biggest show. But there’s a caveat to NBC’s success: It was also the top-rated network this time last year. Once the football season ended, it fell hard to third place. –Tim Molloy

Winner: OWN
After two-and-a-half-years of intense scrutiny, OWN declared itself profitable earlier this year. Founder Oprah Winfrey has admitted that those formative years were far more difficult than she had expected. But, it grew through a series of smart partnerships (including with Tyler Perry), more airtime for Winfrey, and by honing in on black female viewers. –Jethro Nededog

Loser: Alec Baldwin
Alec Baldwin‘s temper — particularly when directed at the paparazzi — has been making headlines for some time now, but this month it cost him a job. Baldwin’s recently launched MSNBC talk show, “Up Late With Alec Baldwin” — which already suffered from lackluster ratings — received a two-week suspension after Baldwin was recorded going off on a paparazzo with homophobic flair. The time-out turned into a permanent vacation when the actor and the network agreed to what they said was a mutual parting. On the plus side, Baldwin now has time to play more Words With Friends. --Tim Kenneally

Winner: Miley Cyrus
Say what you will about Miley Cyrus — she knows how to get attention. And after all, isn’t that the goal of any modern pop star? Cyrus, who caused a national case of the vapors during her MTV VMAs twerknado, upped the outrage meter by appearing to smoke a joint while accepting an EMA. The “Wrecking Ball” singer grabbed attention once again at the American Music Awards — by performing with a giant kitten on the video screen behind her. –Tim Kenneally

Winner: “The Walking Dead”
AMC’s zombie drama finished out its third season in the spring as the top-rated show on TV, aside from football. No cable show has ever accomplished that before. The show’s current fourth season is faring even better, ratings-wise, and AMC is planning a spinoff. You can quibble with plot points, but there’s no escaping the fact that the walkers are devouring TV. –Tim Molloy

Winner: “The Talk”
“The Talk” has been steadily climbing as its main competition, “The View,” has dipped a touch. “The Talk” on CBS is averaging just one-tenth lower ratings (1.1/7) than “The View” (1.2/8) season-to-date in their shared target market, women 25-54. Last season the gap was three-tenths. Eyeballs-wise, the ABC league-leader carries 2.9 million viewers, versus 2.8 million for “The Talk.” Last year at this time, “The Talk” trailed “The View” by more than one million viewers. This season, the gap is less than 200,000. –Tim Kenneally

Winner: Shonda Rhimes
After a couple years of setbacks (“Off the Map” was canceled in 2011, as was “Private Practice” earlier this year), writer and producer Shonda Rhimes finds herself back on top again. “Scandal” keeps fans glued to their TVs on Thursdays, and “Grey’s Anatomy” is holding on after 10 seasons. Rhimes recently announced that she has landed a book deal with Simon Schuster. –Jethro Nededog

Winner: Dan Harmon
After much drama following NBC’s ouster of the “Community” co-creator, Harmon finds himself in the driver’s seat again with Season 5. The move was supported by the show’s hardcore fans, cast and the critics. The crazy spark was gone on Season 4, but everyone looks forward to Harmon re-igniting the flame. Meanwhile, he has a new animated show on Adult Swim, “Rick and Morty,” about a genius kook and his grandson’s adventures through time and space. It promises to make up for the year TV had no Harmon. –Jethro Nededog