In honor of women’s history month, the “UnWrapped” podcast has three incredible guests who join us in conversation. First up, we hear from Kiernan Shipka and Diane Kruger who take us behind the scenes of their latest project, “Swimming with Sharks,” which premiered earlier this month at SXSW.

The six-episode Roku Channel series follows Lou (Shipka), a young assistant who turns the tables on an abusive studio-head boss (Kruger), exposing the darker aspects of Hollywood from a female perspective. 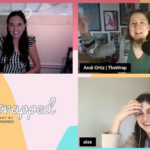 Part II of the episode, presented by Manoel Ferreira Productions, features emerging filmmaker Julia Rosengren. Growing up in poverty, the Brazilian native was motivated to work towards a better future for herself and her family. After pursuing a career as a successful international model, Rosengren shifted her focus to socially conscious filmmaking.

Most recently, she wrote, produced, and starred in “Leaves” (watch here), an environmental-awareness short film that showcases issues with climate change, global warming, wildfires and deforestation. 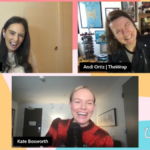 “UnWrapped” is a monthly podcast produced by WrapWomen, dedicated to empowering the next generation of women in media and entertainment. Each episode “unwraps” topics from entertainment news and industry trends to career advice, Hollywood headlines and more.

Special guests include industry leaders, actors, producers and studio execs. The aim of the series is to connect those looking for knowledge and access to those with the knowledge and access, providing the WrapWomen community tools to succeed in their personal and professional lives.

New episodes of “UnWrapped” drop the last Friday of every month. You can listen on TheWrap.com, WrapWomen.com, Spotify, Apple Podcasts, Google Podcasts, Amazon Music or wherever you get your podcasts.