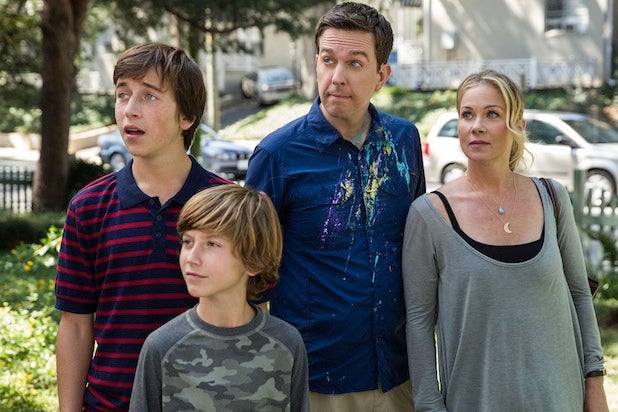 With just a 29 percent approval rating on Rotten Tomatoes, at the moment, the majority of critics are in agreement that the Warner Bros. release has potential as a family road trip gone awry, but fails to live up to expectations. Helms (“The Hangover”) stars as Rusty Griswold, who is married with kids of his own now and wants to relive his childhood trip to Walley World, so he drags his family across the country to do so. Christina Applegate (“Anchorman”) stars as his wife Debbie Griswold.

“Vacation” follows a similar storyline to its original, but critics agree the “pointless vulgarity” and “splatstick” humor rob the flick of a decent chance. This isn’t a movie for the kids — as proven by its R rating — but the adult content may be far too “unshaped” for an older crowd to appreciate.

“The new reboot/sequel ‘Vacation’ is all too true to the experience of taking a long family trip: there are a few special moments you’ll remember and talk about later, but for the most part, it’s a featureless, repetitive voyage that can’t be over soon enough,” TheWrap‘s Alonso Duralde wrote in his review.

He’s not alone. Here are six other critics who advised readers against going along for the ride with the Griswolds.

“Chase and Beverly D’Angelo briefly reprise their roles as Rusty’s parents, and there are numerous callbacks to the previous movies (primarily the first one). That only highlights how empty and cynical this new movie is, a series of belabored, poorly executed jokes that amount to a sad re-creation of a once-beloved comedy franchise.”

“Like the original, this film is rated R, but Rs are raunchier than they used to be. Where the original ‘Vacation’ relied on slapstick for its laughs, the new film is dragged down by something grosser and more hostile — let’s call it splatstick. In the course of the movie’s 98 minutes, a pretty girl and a farm animal both get splattered, the family ends up elbow deep in raw sewage, and Debbie pukes her way through a visit to her old sorority. It’s enough to make you say, ‘Dad, pull over the car. I’m gonna be sick.'”

“‘Vacation’ tries again and again to up the ante from its classic predecessor before calling in Chase and Beverly D’Angelo and even the original Truckster station wagon for brief appearances. But for all the F-bombs and references to ‘rim jobs’ and ‘glory holes,’ the geniuses behind the new film just don’t understand the difference between genuine subversiveness and pointless vulgarity.”

“The ‘Vacation’ formula — this time around, particularly — is somewhat odd to begin with. Some of the humor is slapsticky and kid-friendly… But most of the gags in ‘Vacation’ — which is rated R — involve language most responsible parents don’t want their tiny tots to hear, as well as invocations — though not depictions! — of things like glory holes and rimjobs… Kids will end up seeing it, of course — they always do — and it will hardly scar them for life. It’s not smart enough for that. Still, most of the jokes are just too vague and unshaped to be funny for anyone old enough to buy a ticket without a guardian.”

Also read: Christina Applegate's 'Who Do You Think You Are?' Delivers 2.2 Million Viewers to TLC

David Ehrlich of Time Out wrote:

“A rare reboot so foul and humorless it makes you question whatever attachment you might have to the original, this lazy retread of Harold Ramis’s 1983 ‘Vacation’ sours everything that’s made that film such an undying fixture of basic cable. Splitting the difference between a sequel and a remake, this ‘Vacation’ introduces the next generation of the hapless Griswold family by regurgitating the plot beats of the franchise’s first adventure.”

Will Leitch of Deadspin wrote:

“This new film is coated in something far more foul. Rather than putting a spin on the family comedy, this thing just doubles down on the crude, attempting to out-disgust the original and, well, that’s it. Any sweetness is tossed out the window, any goodwill toward this family is gone… This is less a ‘Vacation’ sequel than a ‘Hangover’ sequel. And if you’ve even seen any of the ‘Hangover’ sequels, you know that is bad news indeed.”

“Vacation” opens in theaters on July 29.