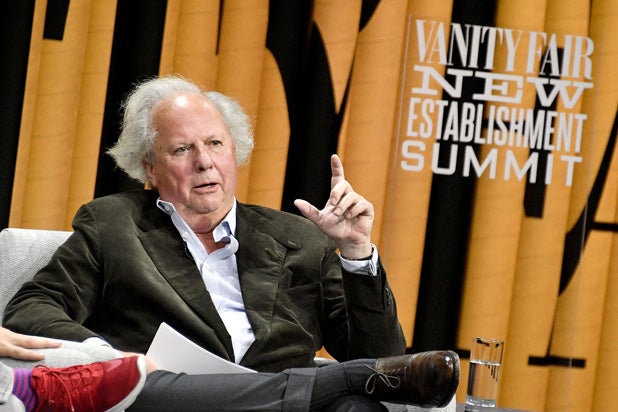 As shock subsides over Graydon Carter’s resignation last week from the top job at culture bible Vanity Fair, Hollywood and news media have been wildly speculating about his replacement.

There aren’t many names at top of mind for the high-profile gig, which also includes gatekeeping a legendary annual Oscars party and a Silicon Valley thought leadership summit called The New Establishment.

Janice Min vacated her top job at The Hollywood Reporter in February, TheWrap previously reported. The former Us Magazine editor was no stranger to premium video content and pricey editorial shoots at THR.

“There are a ton of names” in the mix, one insider told New York gossip column Page Six, including Sally Singer, a former Vogue lieutenant who served editor of the New York Times’ T Magazine.

Other names floating include New York Magazine’s Adam Moss, who was named Adweek’s magazine editor of the year last year; Dylan Jones, the editor of the still-thick British version of GQ; and Jim Nelson, the longtime American GQ editor whose publication has shown considerable growth of late, particularly in mobile video. And WWD has mentioned another dark horse in Adam Rapoport, the editor in chief of Conde Nast’s Food Innovation Group.

One thing is clear: the decision seems to have fallen to Anna Wintour, arguably the most famous modern magazine editor and empress of Vogue who has also served as Conde Nast’s Creative Director since 2013.

In that context, Wintour is free to weigh in on the state of each Conde Nast title (Wired, Bon Appetit and Architectural Digest, to name a few).

Wintour is fond of promoting within, numerous reports say, which means a few inhouse VF staffers could be looking at a big upgrade.

Wintour is not the only magazine brass scrambling to fill empty desks. Carter kicked off a resignation spree for glossy editors that includes Robbie Myers of Elle, Nancy Gibbs of Time and 16-year Glamour veteran Cindi Leive.

The departures mark a massive changing of the guard in lifestyle publishing, and will certainly send a ripple effect through social power structures of New York and Los Angeles.

Vanity Fair is surviving as well as a print publication can in the digital age, with a reported paid circulation of 1.2 million print subscribers per month. Online traffic is much better, naturally, clocking around 14 million unique visitors per month as of last fall. That number was up 23 percent, year over year, Fast Company said.

Vanity Fair also set a personal best record for most subscriptions sold in a day this December, after the title and Carter were targeted by President Donald Trump.