“Violent Night,” 2022’s “Bad Santa”-meets-“Die Hard” action movie, was a sleeper hit, making more than $75 million globally on a budget of only $25 million. (Plus untold riches from its PVOD release shortly after its theatrical bow.)

The Tommy Wirkola-directed and David Harbour-starring film saw Santa Claus, who in this mythology was originally an ancient Norse warrior, defend a family from killer thieves and also suggested a broader world.

And don’t worry, there will be more Christmases for Harbour’s Santa to save. “Yes,” Wirkola said when we asked if the sequel was happening. “We’re talking about it and we’re just making deals and getting everything in order.”

While speaking to TheWrap about the upcoming home video release of “Violent Night,” Wirkola said they wouldn’t shoot right away and have to get the script together. The second installment will also be written by Pat Casey and Josh Miller. But the team will use their time wisely. 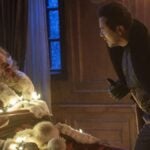 Also Read:
‘Violent Night’ Director Tommy Wirkola on Maintaining Heart Among the Chaos: ‘It Should Still Feel Like a Christmas Movie’

“We have time to really crack the script and figure out the story,” Wirkola said. “And we have some ideas, me and Pat and Josh and the producers, we’ve been talking about where we want to take it and what we want to see.”

As for the story, expect to see a lot more of the traditional Santa Claus mythology, but with a “Violent Night” twist.

“There’s stuff we left on the floor like the North Pole, Mrs. Claus, the elves,” Wirkola said. (The original film was set largely at a Connecticut mansion under siege from the villains.) “But story-wise I think we have a really, really cool idea that expands on the world and scope, but still keeping that tone that we love from the first one.”

But remember, “Violent Night 2” will only happen if you are good boys and girls. Santa is always watching. He’s got a list. And he’s checking it twice.