All eyes were on Warner Bros. Discovery’s second-quarter earnings Thursday following Wednesday’s report that the company was preparing a major restructuring of its content divisions, and the entertainment conglomerate added 1.7 million global streaming subscribers to HBO Max and Discovery+ to reach 92.1 million global subscribers.

For the quarter, the company that trades under the stock ticker WBD reported revenues of $10.82 billion and revenues decreasing 1% compared to the same quarter year over year and a diluted EPS of -$1.50. That was a miss from analyst expectations of $11.6 billion and a drop in earnings of 3 cents per share, according to Yahoo Finance.

As a result the company’s stock plunged more than 12% in after-hours trading.

Warner Bros. Discovery did not break out individual subscribers for HBO and HBO Max, which last quarter when it was still controlled by AT&T had reached a combined 76.8 million customers worldwide by the end of March.

“We’ve had a busy, productive four months since launching Warner Bros. Discovery, and have
more conviction than ever in the massive opportunity ahead,” CEO David Zaslav said in a statement. “We have the most powerful creative engine and bouquet of owned content in the world, as highlighted by our industry leading 193 Emmy nominations, and we intend to maximize the value of that content through a broad distribution model that includes theatrical, streaming, linear cable, free-to-air, gaming, consumer products and experiences, and more, everywhere in the world. We’re confident we’re on the right path to meet our strategic goals and really excel, both creatively and financially, and couldn’t be more excited about the future of our company.”

WBD’s Q2 revenue breakdown was headlined by the Networks Segment ($5.74 billion) and followed by the Studio Segment ($2.79 billion) and the Direct-to-Consumer Segment ($2.2 billion). However, the company still reported a net loss of $3.4 billion in the quarter as the cost of revenues ballooned to $6.6 billion in the three months ending June 30. This escalation was expected as the two companies merged into a larger conglomerate that is now working to find $3 billion in synergy-driven cost-savings.

Importantly, cash provided by operating activities increased to $1.01 billion and the company reported free cash flow increased to $789 million in Q2. The latter is a key metric for Zaslav and the executive team as they look to consistently generate cash.

Discovery and AT&T’s WarnerMedia completed its merger to form the combined company, Warner Bros. Discovery, in April. The company carried $53 billion in gross debt as of Q2 and planned to have paid down $6 billion of that figure by August.

Zaslav’s leadership team has repeatedly emphasized a goal of reaching $3 billion in cost savings to help pay down the debt it acquired in the merger. “It’s not about winning the spending war,” Discovery CFO Gunnar Wiedenfels said in back in February. “Money doesn’t score goals.” 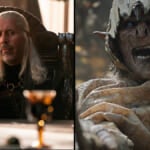