This review of “We Feed People” was first published March 19, 2022, after its premiere at the SXSW Film Festival.

Though he is just one man, José Andrés has the energy and drive of dozens. After arriving in New York from Spain in 1991, his outsized talents and personality propelled him to fame as one of the first modern celebrity chefs. His D.C. hotspot Jaleo kicked off an expansion that eventually encompassed around 30 restaurants, cookbooks, a range of kitchen products, classes at major universities and TV appearances.

But as Ron Howard chronicles in “We Feed People,” the closer Andrés got to having it all, the more aware he became of how many others had nothing.

Andrés’ NGO, World Central Kitchen, started in 2010 but kicked into high gear in 2017 in response to Puerto Rico’s Hurricane Maria. When he faced bureaucratic obstacles from government organizations he pushed them aside impatiently, in a quest to establish his own, sustainable form of aid. As he says in the film, “I am good at seeing opportunity where others see mayhem.” So while President Trump was tossing rolls of paper towels into a despairing crowd, Andrés and his group were sourcing safe kitchens, any available water and food, chefs to cook and volunteers to distribute. 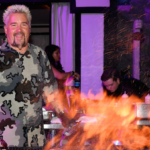 “We don’t only feed people,” he teaches a local member of the Puerto Rican relief team as they study a map of towns in need. “We create systems.”

Most of the movie provides visual proof of this ethos, as the camera — often held by members of the volunteer team — follows him from one devastated community to the next. Earthquakes, hurricanes, volcanoes: each disaster requires a new system, and the beauty of Andrés’ approach is the way in which he rethinks calcified tactics. Most notably, he forcibly rejects the easy, and barely-edible, MREs offered by the government, in favor of locally influenced, personally cooked meals.

Though this method might feel more complicated, it becomes, remarkably, far more practical, making use of available products, supporting struggling businesses and providing both emotional and physical nourishment when and where they’re most needed. 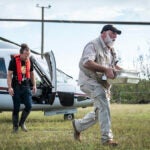 Howard also gives us glimpses of other people in Andrés’ overfilled life: the heroic wife and loving daughters he too rarely sees, the volunteers he inspires, the staffers who have to find practical ways to manifest his grand vision — and are sternly taken to task when they don’t or can’t. One of the most electric moments of the film involves an argument with a colleague that brushes up against bullying. Andrés insists on explaining himself to an unsettled witness, talking over her as she tries to shut his excuses down.

But these humanizing sections are really too brief; an expansion of personal stories would have allowed the film to feel fuller and more complex. Climate-minded viewers might also wish the movie had delved deeper into the implications of so many of these disasters, which, Andrés bluntly observes, are now multiplying with terrifying speed. 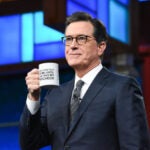 His hands-on contribution to literally millions of global citizens is genuinely astounding in its generosity, innovation, and practical application. But without the depth of other threads, the movie itself (which was executive produced by WCK CEO Nate Mook and Richard Wolffe, the managing director of José Andrés Media) can come across as less cinematic than advertorial.

“We Feed People” does feel like a partner project to WCK’s photobook “We Fed an Island: The True Story of Rebuilding Puerto Rico One Meal at a Time,” and even to Andrés’ vivid, on-location social media videos. One could easily imagine the movie being played at a World Central Kitchen gala, motivating guests to greater support.

But as education and, especially, inspiration, the movie wholeheartedly succeeds. Those who don’t know about WCK, and even those who do, will be awed to see how individual efforts truly do make a difference. As Andrés notes, while racing to yet another crisis, there will never be a shortage of need. Many viewers may, in fact, end the movie and go straight to his Twitter feed to learn even more. They’re likely to find him in Odessa, Lviv or any one of the border spots where his team is currently feeding hundreds of thousands of Ukrainian refugees.