Showtime’s upcoming survival drama “Yellowjackets” put its young cast through the ringer, forcing them to confront tough environments and psychologically taxing scenarios to tell the story of a girls soccer team whose plane crashes in the remote northern wilderness.

The “Lord of the Flies”-esque series unfolds across two timelines, with the teenage version of the central cast trying to survive in the wilderness and their fully grown selves attempting to piece back together their lives 25 years later. The drama, led by Christina Ricci, Juliette Lewis, Melanie Lynskey and Tawny Cypress, is described as “equal parts survival epic, psychological horror story and coming-of-age drama.”

“We knew we didn’t want this to be a show about what happened, but about why it happened,” series co-creator Ashley Lyle said, previewing the show during a Television Critics Association panel on Wednesday. “And so we figured the best way to do that was to just play it all in the beginning. We wanted to strongly imply what happens so that the question is more ‘How did they get from point A to point B?'” 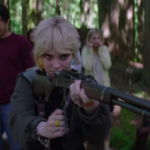 Asked about one particularly graphic scene in which the girls consume human meat, Lyle revealed that the actresses were actually eating venison — though a Beyond Meat option was also provided for Samantha Hanratty, who is vegan.

“Spoiler alert, not really a soccer show,” Lyle said. “But it it’s about how these girls were able to really work together as a group and then to see how that might really start to fall apart and shatter over the course of a season.”

Lyle’s co-creator and co-showrunner Bart Nickerson described the teen survival genre as a “big premise that has a lot of different places to go,” saying that he would be “pretty surprised” if “Yellowjackets” bore much similarity to shows like Amazon’s “The Wilds” or “The Society” at Netflix. “This is like a giant petri dish approach … sort of getting underneath the hood of like human beings, if that makes sense.”

Lewis said she signed on to the project because the pilot was “one of the best scripts I’d read in the last 10-plus years.”

“It was absolutely riveting on the page, which is so rare,” she said. 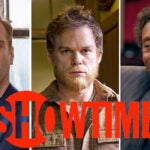