Israeli director Ari Folman has made five feature films, including 2013’s bold live-action/animation sci-fi hybrid “The Congress.” But nobody at the Cannes Film Festival who sees his new film, “Where Is Anne Frank” (which premiered in an out-of-competition slot on Friday), is liable to be thinking of any Folman film other than his Oscar-nominated “Waltz With Bashir” from 2008.

While “Where Is Anne Frank” and “Waltz Bashir” are dramatically different in some ways – the former is a fantasy based on real events, the latter an autobiographical take on Folman’s time in the Israeli army – they both use sophisticated and dramatic animation to tell wartime stories to which Folman has a close personal connection. “The Congress,” the film Folman made in between “Anne Frank” and “Bashir,” felt like a fascinating, risky experiment; “Anne Frank” feels like a consolidation of his strengths and an attempt to explore new areas in a subtler way.

It’s a riff on what he did in “Bashir,” not a departure from it. And while it may not be as groundbreaking or as wholly satisfying as that film, it’s another daring and provocative use of animation with the power to haunt those to see it. 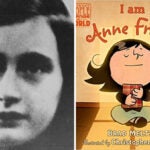 Also Read:
Why Revisiting the Story of Anne Frank Is More Important Than Ever (Guest Blog)

The film opens on a rainy morning outside the Anne Frank House museum in Amsterdam, where a long line of people wait under their umbrellas for the museum to open, ignoring the fact that gusts of wind are blowing away the fragile tent in which a family of refugees are living a few feet away. Inside the first floor of the museum, meanwhile, the glass suddenly shatters in the glass case holding the famous diary that a teenage Anne Frank wrote while she was in hiding during World War II; letters on the page blur, come together into long tendrils, and form themselves into the figure of a young girl.

The girl is Kitty, the imaginary friend that Anne’s addressed when she wrote her diary. In flashbacks that run through the film, we learn that Kitty was brought to life by Anne’s diary, though no one else could see her; in the modern-day story, she comes back with no idea of how much time has elapsed or what has become of her friend Anne. She finds that while she’s invisible when she’s inside the house, she can be seen if she leaves the premises in possession of the diary – and since she wants to leave to find her friend Anne, she turns into an infamous diary thief who’s hunted across the city. When her only allies turn out to be a group of young refugees who are themselves slated for deportation, the parallels are unmistakable – not subtle, to be sure, but powerful.

Folman makes marvelous use of different looks: The flashbacks are dark and menacing, with Nazi soldiers represented as long, cloaked figures with swastikas adorning their black cloaks, while the present-day scenes are lighter and less stylized.

At a time when Holocaust denial is on the rise, “Where Is Anne Frank” gives us a girl forced to accept a hard truth she wants to deny. There are lighter moments in the film, gliding reveries on ice skates and chase scenes full of delightfully improbable (and cartoonish) derring-do – but at its heart, the movie grows grimmer and bolder as it delves deeper and deeper into a world where the dark side of Greek mythology is spiked with Nazi symbolism, and the terrors of the 1940s jostle with the perils of the 2020s.

Folman finds a way to give us the ending we want, and then make us face the ending we have to take. And he ties the past and present together: One end title points out that 17 million children were forced to flee from war zones around the world in 2020, and another says that Folman’s parents arrived at a WWII concentration came the same week as Anne Frank.