He’s in Italy, TheWrap has learned – as far away from the federal courthouse in Riverside as a former Disney CEO could hope to be. 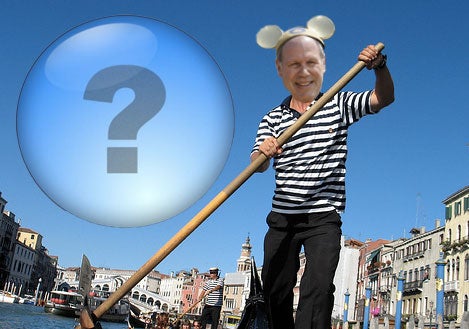 While not formally subpoenaed, Michael Eisner was called to the stand by plaintiff Celador International, creators of "Who Wants to Be a Millionaire," and was expected to appear late this week.

The British production company is suing The Walt Disney Co. and its stable of TV partners for $270 million, accusing them of shady dealings that deprived Celador of revenue during the heyday of "Millionaire."

Celador had reason to count on Eisner’s appearance – after all, his name has been on the witness list for weeks. And his successor, Bob Iger, had no problem making his own court date this week.

But Eisner left town on June 11, and it looks like he won’t be back until at least mid-July.

His publicist, Adam Schiff, told TheWrap on Thursday that Eisner, who founded the private investment firm Tornante Company in 2005 after running Disney for 20 years, left last week for the Boot on business – though what business that is exactly, Schiff did not say.

Either way, Eisner’s high-tailing leaves Celador without one of its marquee witnesses in a trial that has taken over six years to get before a jury.

The U.K. company alleges that Disney, ABC, Buena Vista Television and Valleycrest Productions colluded to deprive them of millions in revenues and profits via secret arrangements and sweetheart deals when “Millionaire” came to the U.S. in 1999.

Katz’s subsequent call to Eisner’s representatives further revealed that Disney’s ex-boss wouldn’t be back in the country until around July 10. Judge Virginia Phillips has said she wants the evidence portion of the trial over by June 29.

Celador’s chief lawyer, a clearly frustrated Roman Silberfeld, told the judge this week that he would go ahead without calling Eisner as a witness if he had to. In a civil matter, Silberfeld had little recourse.

An individual close to the case told TheWrap that late on June 15, Silberfeld spoke to a Val Cohen, an executive at Tornante, by phone to discuss Eisner’s absence. Silberfeld, who had been under the impression that Eisner had been out of the country a while, was surprised – and not just a little peeved – to be told Eisner had just left town a few days before.

Cohen, according to the source, supposedly did not tell Silberfeld where Eisner had gone, or why.

The prosecution is yet to deliver a smoking gun. But the lucrative package deal that ABC came to with WMA — who were representing Celador at the same time — and the shifting of various “Millionaire” rights from ABC to Buena Vista Television are being painted as a shell game.

Now in its third week, the trial has seen an array of industry power players take the stand. Among them, former NBC/Universal co-chair Ben Silverman, who got the "Millionaire" deal rolling as a London-based agent at William Morris Agency in 1998; and current ICM VP Greg Lipstone, who handled the show’s docking at ABC for WMA.

On June 16, Iger, current Disney CEO and President, took the stand for his own well-pressed performance. Still, none of them have the marquee value or the corporate passion of Eisner – especially when it came to the importing of “Millionaire” to America.

Emails from Eisner at the time “Millionaire” debuted in the U.K. in 1999 were read aloud in court on June 16, when Iger was on the stand. If personal recollection from Davies and Iger postulated Eisner’s enthusiasm for "Millionaire," the hyperbolic emails certainly confirmed it.

Eisner wrote to his executives in 1999 that the game show could be a bigger deal for ABC that its NHL broadcast rights, and that “Millionaire” might make the network more that $1 billion.

“We own it and it costs almost nothing,” Eisner wrote on Aug. 24, 1999, just over a week after “Millionaire” debuted on ABC.

He added, “sometimes the entertainment business is just wonderful.”

Iger, who took over at Disney after Eisner exited in 2005, tried distinctly to take a more circumspect appraisal in his testimony.

“Mr. Eisner was a great enthusiast and he often got excited about things even to the point of making wild guesses in describing the billion-dollar estimate,” Iger asserted to the court. “I’m less excitable.”

Except where it comes to appearing for court appointments.

Certainly, there are worse places to spend part of your summer than Italy, but what is an obviously busy man like Michael Eisner doing there for the next few weeks?

Perhaps it’s just a long trip down memory lane? After all, “tornante,” the name of Eisner’s private investment firm, came to him, he says, on a bike trip through Italy; tornante translates into “hairpin turn” in English.

Whatever Eisner is doing in Italy, he certainly did a hairpin turn away from Riverside.