Comedian Trevor Noah headlined the first White House Correspondents’ Dinner since 2019 and the first one with a sitting president in attendance since 2016 – and he pulled absolutely no punches, poking fun at every in sight from Fox News personalities to the failed CNN+ to President Biden himself.

The “Daily Show” host welcomed everyone to the festivities, warning that he was going to be mocking many people in the room, along with the institutions they represent. “The truth is I want us all to have a good time tonight, so please everyone relax,” he began. “I know everyone in this room is worried about who catches you laughing at what. But just chill, just chill. We’re celebrating [that] we’re out. You know, get comfortable — not too comfortable, Jeffrey Toobin, not too comfortable,” he told CNN’s former chief legal analyst who exposed himself during a Zoom call with colleagues at The New Yorker.

With Slap-gate still fresh in the minds of some, Noah said that it was risky telling jokes these days that might offend some. “I mean, we all saw what happened at the Oscars,” he said. “I’ve actually been a little bit worried about tonight. I was like, what if I make a really mean joke, you know, about like Kellyanne Conway, and then her husband rushes up on the stage — and thanks me.”

Yes, Donald Trump’s former senior counselor is still hitting Democrats below the belt, and yes, her attorney husband George Conway can still be seen on news shows taking swipes at the GOP. 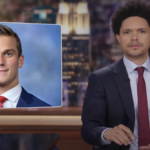 Also Read:
Trevor Noah Jokes Madison Cawthorn’s Run-Ins With the Law Make Him the Only Republican Keeping Police in Business

Of course, Noah had to mention Florida Senator Ron DeSantis – more than once – just because it seems like he’s in just about every news cycle these days. :Ron DeSantis is like if Trump was the original Terminator, DeSantis is like the T 1000, you know, you’re smarter than him. You’re slicker than him — You can walk down ramps. … Everyone was just able to look at the numbers and see that [Trump] was wrong [about winning the 2020 election]. That’s why Ron DeSantis is one step ahead. First, you ban the math textbooks, and then nobody knows how to count the votes.”

Here’s a quick look at some of Noah’s best jabs of the night:

On President Biden: “Mr. President, thank you for being here. Thank you for having me here. You know, I was a little confused about why me, but then I was told that you get your highest approval ratings when a biracial African guy standing next to you.”

On First Lady Jill Biden: “Dr. Biden continued her teaching career, the first time a president’s spouse has ever done that. … You might think it’s because she loves teaching so much, but it’s actually because she’s still paying off her student debt. I’m sorry about that, Jill. Yeah, I guess you should have voted for Bernie, you know?”

And more on President Biden: “People have been so hard on you, which I don’t get. I really don’t. You know, I think ever since you’ve come into office, things are really looking up. You know — gas is up, rent is up, food is up. Everything.”

And yet more on President Biden: “As you all know, President Biden’s lack of a filter does get him into hot water. Last month he caused a huge international incident saying that Vladimir Putin should be removed from power. It was very, very upsetting to Russia — until someone explained to them that none of the stuff Biden wants actually gets done.” 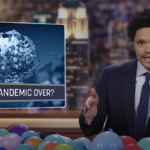 Also Read:
Trevor Noah Questions Dr. Fauci’s End-of-Pandemic Declaration: ‘How Do You Not Know by Now How Stupid People Are?’ (Video)

On White House Press Secretary Jen Psaki, who is joining MSNBC next month: “Congratulations to Jen on your big career change. But you know, moving to MSNBC is gonna be a big switch up for you because, right now your current job is to make the Biden administration look as good as possible, you know, at all costs. Now you’re gonna be at MSNBC and you’re gonna have to… um… you’ll be fine actually.”

On the “Morning Joe” married team of Joe Scarborough and Mika Brzezinski: “Shout out to Joe and Mika. Yeah. I love you guys. Most adorable HR violation in town. I love it.”

On “Meet the Press” host Chuck Todd: “Lot of big media names in the room tonight. Chuck Todd is here. Chuck, you here? Yeah. How you doing? I’d ask a follow-up, but I know you don’t know what those are.”

On Fox News’ father and son team Peter and Steve Doocy: “You guys are relentless every day you show up and every day you demand answers on the pressing issues of the day. And then Fox News asks about Hunter Biden. And I’ll be honest, though. I actually think that’s a good thing. I really do. I think people need to be held accountable if they’re using their dad’s name to get ahead in life. And I can’t think of anyone better to ask about that than Peter Doocy.”

On Fox News: “I think they get a bad rap because it’s a mixed bag. You know, they actually have really good journalists. It just depends on when you watch. Right? Fox News is sort of like a Waffle House. Yeah. It’s relatively normal in the afternoon, but as soon as the sun goes down, there’s a drunk lady named Jeanine threatening to fight every Mexican who comes in.”

On Fox News’ Laura Ingraham: “Wow. What can you say about her that hasn’t already been said by the Anti-Defamation League?” 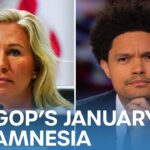 Also Read:
Trevor Noah on Republicans Who Can’t Remember Jan. 6 Interactions: ‘Politicians Are Supposed to Be Good at Lying’

On former CNN head Jeff Zucker: “Apparently Jeff got fired after he tried to keep his workplace relationship a secret, which is weird because if he really didn’t want anyone to know about it, he could have just made a show about it on CNN+.”

Noah is the first to perform at the dinner in the presence of a sitting president since 2016 because Donald Trump boycotted the dinner three years in a row. Before Trump, the last president to not attend the longstanding event was Ronald Reagan in 1981, as he was recovering from an assassination attempt. 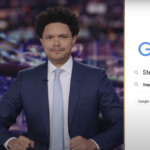 Also Read:
Trevor Noah Says He Couldn’t Resist the ‘Power to be Petty on an Epic Scale’ if He Were Elon Musk