Binoche may not be the first name you’d think of for a catfishing scenario, unless it were the other way around, and the deceiver was, say, some unhygienic shut-in surrounded by pizza boxes. But in Safy Nebbou’s elegantly compelling adaptation of Camille Lauren’s novel, which he co-wrote with frequent Arnaud Desplechin collaborator Julie Peyr, it’s the radiant Binoche pulling the strings, and she sells this high-wire gambit with all the star power, sexuality, and character smarts in her considerable arsenal.

Claire (Binoche) is a divorced comparative literature professor with a lively, feminist-centered approach: An early classroom scene offers up another story shout-out, the fact that she’s teaching the love-and-cruelty classic “Les Liaisons Dangereuses.” But that’s a flashback after we first meet her, pale and drawn, talking to a therapist (Nicole Garcia) and ready to spill an eye-opening yarn. 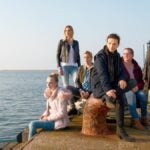 Her story starts with a hot and heavy fling gone sour. When Claire calls her younger beau Ludo (Guillaume Gouix) and instead reaches his photographer friend Alex (François Civil, “Frank”), his jokey, dismissive tone — topped off by Ludo in the background pretending not to know her — sends her into a tailspin of embittered loneliness. Unable to entirely let go of the humiliation, in the late hours Claire turns to social media, which she describes to the therapist as “the shipwreck and the life raft.” Setting up a fake Facebook account as a 24-year-old fashion industry intern named “Clara,” she friends Ludo’s buddy as a side door to keep tabs on the lover who spurned her.

But when Alex starts messaging “Clara” with genial, innocently flirtatious chat, Claire leans into the newfound (remembered? reignited?) power she suddenly feels as the younger, desired woman. She plays along like a teenager in the throes of first love, the phone always nearby, its notification sounds a lifeline to a more romantic and “seen” world of mutual attraction. Nebbou and cinematographer Gilles Porte underscore the duality of Claire’s teasing adventure with window-reflection shots wherever they can get them, but it’s Binoche’s newly flush face — alone with her secret but alive with cunning and exhilaration — that you can’t stop looking at. 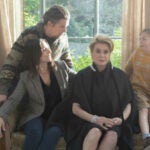 Also Read:
‘The Truth’ Film Review: Catherine Deneuve and Juliette Binoche Grapple With Honesty and Each Other

It’s tempting to assume what Binoche is doing with her features whenever she’s on the phone or tapping away on a text exchange is “feeling” young again, but that sneakily isn’t it. “Clara” isn’t someone else; it’s present-day Claire just circumventing a harsh world’s prejudices, enjoying the thrill of reinvention and the heat of someone else’s increasingly insistent (and erotically charged) attention. In one of her calls with Alex, she’s even grocery shopping and looking very much like her working-woman self, as if her everyday reality should be able to peacefully co-exist with this exciting new persona. But as the scene plays on, Nebbou centers his star as the sounds and textures of the world around her drop out, a vivid filmic suggestion of the perilous rabbit hole she’s really entered.

That hole eventually goes to some dark places psychologically, with the story’s twists and turns taking over in a way that is sometimes thrilling, but ultimately feels a tad too punishing, and — in terms of the themes of invisibility, contrivance, and escape — a little on the nose. As for what “Who You Think I Am” has to say about women, aging, and independence, the totality of Binoche’s alternatively luminous and vulnerable performance does more on that front than does some of the articulated dialogue in individual scenes, mostly those with the therapist. You can hear in those moments, regrettably, a writer’s fear of being misunderstood, but it isn’t enough to derail the more visceral pleasures of a stimulating if risky what-if played to the hilt, and smoothly paced by editor Stéphane Pereira. 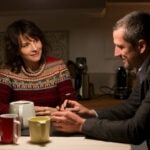 Though it’s Binoche’s show — as ready for her many close-ups as a gifted actor can be — she’s ably supported. Civil takes the difficult job of being the often-unseen half and runs with it, while Garcia brings the necessary gravitas to a largely reactive role. And in a well-turned bit of background establishing, Charles Berling (“Elle”) appears briefly as Claire’s ex-husband, whose leaving her to marry a much younger woman is an original source of the aching rejection Binoche’s character initially internalizes, then rebels against with her veil of ones and zeros.

“Who You Think I Am” may ultimately be just a corker of a melodrama, but at least with Binoche and a director enamored with the hurt, power, and sensuality she provides, it’s a tingly riff on a very 21st century kind of dangerous liaison.

“Who You Think I Am” opens in Los Angeles and New York September 3.