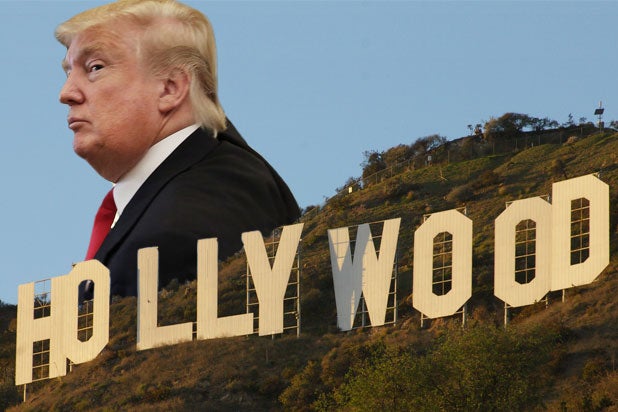 Donald Trump has been exasperating Republicans from the moment he announced his run for the White House last month, with his racially charged remarks about Mexican immigrants, his criticism of Arizona Sen. John McCain and that cellphone-number stunt directed at South Carolina Sen. Lindsey Graham.

But Trumps threat on Thursday to ditch the GOP and run as an independent has been met with both anger and skepticism from Hollywood conservatives, who fear that a high-profile third party candidate would lead to a sure win for Hillary Clinton.

“There is concern about a third party run among my peers in the industry,” Jeremy Boreing, who runs leading Hollywood conservative group Friends of Abe, told TheWrap. “Trump is a force of nature, but Bill Clinton would have never won the White House had it not been for Ross Perot.”

In 1992, Perot, a right-leaning billionaire businessman, mounted an independent, mostly self-financed campaign for the presidency under the banner of the Reform Party. He won 18.9 percent of the vote, and was widely credited with tipping the election to Clinton from incumbent George H.W. Bush.

Now many Hollywood conservatives are worried about a ’92 repeat.

“There’s a general sense among Hollywood conservatives that people should play by the rules,” Boreing said. “If you’re going to run with one party and take advantage of their infrastructure, then you should be beholden to the same process that all other candidates have to abide by. By the same token, the party has to play fair with Trump.”

Trump has repeatedly said he doesn’t need any money and isn’t looking for donations.

On Wednesday, the real-estate mogul announced in a press release that he was too rich for the Federal Election Commission forms, suggesting that his net worth is too high fit in the boxes provided on the form. But he filed the paperwork anyway.

According to his 92-page financial disclosure documents, Trump is worth about $1.4 billion, by far the wealthiest candidate in the crowded 2016 presidential race. The business mogul and reality TV star has estimated his own wealth at $10 billion. But Forbes insists it’s closer to $4 billion — most of it not liquid but tied up in real estate and other investments.

Considering that the cost of a viable candidacy could run north of $1.5 billion, Trump may end up needing Hollywood’s support and donations, whether he admits it or not.

“He’s absolutely going to need the Hollywood crowd and other big donors,” Ford O’Connell, Republican strategist and adviser to John McCain in 2008, told TheWrap. “He’d go broke if he financed the entire campaign by himself.”

But many in Hollywood and Washington, D.C., don’t believe Trump is serious about his threats.

“He’s sending a message to the establishment basically saying, ‘Back off or else.’ But I don’t think he’s going to actually do it,” O’Connell said. “He knows it would mean Hillary would win.”

If he does go it alone, experts say, he would not only lose the election, but the support of the conservatives who seem to like his tell-it-like-it-is approach thus far.

“He would certainly get a lot of media attention because well-financed independent candidates have the opportunity to play the spoiler role,” Matt Barreto, a political science professor at the University of California Los Angeles, told TheWrap. “But he’ll never win.”

And while Trump may think he can go it alone, experts say he would be wise to tread carefully. “The political parties are so powerful and strong, they’re able to control the nominating process,” Baretto said.