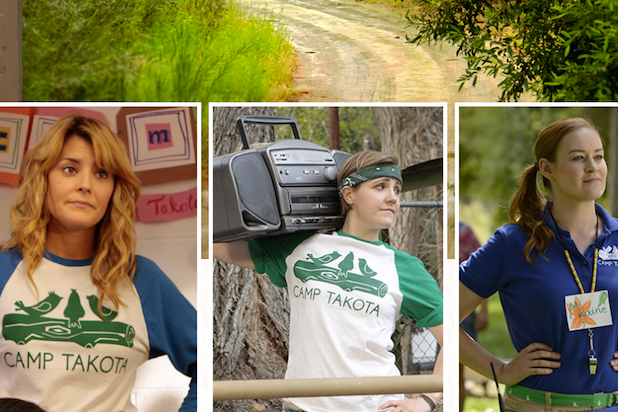 Grace Helbig, Hannah Hart and Mamrie Hart are asking millions of fans across YouTube, Facebook and Twitter to do something unfamiliar: actually pay to watch them act.

The three women star in “Camp Takota,” a movie about a woman (Helbig) who goes back to summer camp after her life falls apart. They are selling the film, conceived by producer and financier Michael Goldfine, on their own from the movie’s website, which is powered by New York-based start-up VHX.

VHX has had success helping comedians like Aziz Ansari sell concert films without the help of a traditional distribution company. Yet though Ansari’s fans are accustomed to paying to see him appear in concert or in movies, Helbig’s YouTube fans watch her for free every single day on her DailyGrace channel, which has more than two million subscribers.

If those fans spend on “Camp Takota,” it will demonstrate the potential of “YouTube stars” off of YouTube. Members of the online video community have spent the past couple of years arguing that these stars are the next generation of celebrities, and movie studios should be casting YouTube stars in their movies. They have large and passionate followings online that will watch them do anything, or so the thinking goes.

“I don’t want to pontificate about how important something like this is,” VHX CEO Jamie Wilkinson told TheWrap. “But it’s reflective. You can see these audiences that Grace and Hannah have built on YouTube will come with them their whole career. It doesn’t matter what they do.”

Helbig’s ascent began in 2008 when she uploaded her first daily video blog (“vlog”) to MyDamnChannel. That series later migrated to YouTube, where Helbig amassed one of the largest followings on the site. She has ceased Daily Grace to start her own channel, one that already has more than 1.5 million subscribers.

Hannah Hart said she was neither brave nor foolhardy enough to pursue a career in entertainment until she made a video three years ago and it became popular.

“Suddenly I found myself given an open door to have a creative outlet,” Hart told TheWrap. “I saved whatever I made off of videos to fly to LA, meet people and build relationships. Now I live in LA and do this full-time.”

Yet Hollywood remains wary of many of these entertainers, some of whom turned to YouTube after they could not get good roles in films or TV shows. A lucky few have already scored deals with major agencies or TV shows, but expanding beyond YouTube demonstrates is critical either way for reasons both superficial and financial.

It’s possible to have a career on YouTube, but you can’t be a mainstream star while relying on one website. That’s a reality many of YouTube’s biggest stars have been coming to grips with over the past year. Freddie Wong told TheWrap last week his next ambition is to grow his own website, RocketJump, while burgeoning online video power Maker Studios will try to convince advertisers in April it provides value off YouTube.

“None of us just wanted a singular YouTube career,” Helbig told TheWrap. “We wall wanted to be multi-platform — whether we all knew that or not.”

The fan base those stars have cultivated on YouTube and other social services like Instagram and Facebook are vital to their efforts to expand into TV or film. Those platforms also give Helbig and the Harts a mean of connecting with fans that go underutilized by many movie stars. Helbig has been updating her fans with regular videos from the set, taking fans behind the scenes of the production.

“I know things resonated because the crew and everyone involved became characters,” Helbig said. ‘The audience knew all of our production assistants. They felt like they were on-set with us every day, and that’s inherently what we do with the web show. We have a two-way conversation with them.”

Though bringing fans on set is natural to Helbig and her co-stars, making them wait is not. Their fans are used to the instant gratification of YouTube, where creators upload videos within hours of finishing them. Mamrie Hart described it as a “test in patience.”

That is where the constant updates have been crucial. Though fans may not get to watch the full movie right away, they are essentially watching a documentary about the production for nine months. They can also use that footage, as well as merchandise to create GIFs on Tumblr or videos of their own.

This frequent interaction is why Los Angeles-based start-up Chill first partnered with Goldfine, and why VHX stepped in when Chill shuttered its entertainment operations. Fans who feel that involved will pay to see a movie and buy a t-shirt from said movie.

Wilkinson said pre-orders of the movie have been “very well.”

“This is a film release in the 21st century,” Wilkinson said. “It’s not just a movie but a movie and a  documentary about a movie. The engagement level is astronomical.”

Whether that engagement lures in new fans remains to be seen.

“I hope it reaches a broader audience,” Helbig said. “First and foremost we want our core fans to really love it and be able to experience something other than us being ourselves.”