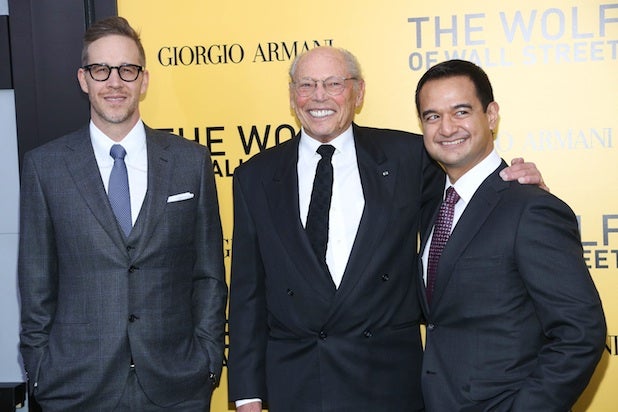 Riza Aziz and Joey McFarland acquired the rights to “Wolf of Wall Street” knowing they had three strikes against them: drugs, sex and violence. Terence Winter’s script, brought to life by Martin Scorsese and Leonardo DiCaprio, featured copious amounts of all three.

While the excess makes for one of the year’s most fun movies, it is also a risky business proposition.

That’s one reason Warner Bros., which had developed a script based on Jordan Belfort’s memoir, killed the project. Yet Red Granite was willing to take the risk, and convinced Warner Bros. to let them take it off their hands.

“When they decide to not make a movie, they don’t want anyone else to be successful with it,” McFarland told TheWrap. “I don’t know if they thought we’d be successful in making it, but given the long-term relationship between Warner Bros. and Leonardo, they didn’t want to stand in his way.”

Also read: Martin Scorsese on ‘Wolf of Wall Street': I Wanted It Big and Ferocious

As the movie’s Christmas Day debut approaches, Aziz and McFarland’s bet looks like it will pay off. The movie is tracking to perform well at the box office, and has received strong reviews from most critics.

TheWrap spoke with the two financiers and producers about finding movies in the studio trash can, whether “Wolf of Wall Street” is a comedy, and Matthew McConaughey‘s similarity to Darth Vader.

TheWrap: Red Granite fully financed ‘Wolf of Wall Street,” but it didn’t originate with you. How did you first get involved with the project?
McFarland: This goes back to 2009 when Riza and I decided to join forces and build Red Granite. One of our sweet spots is we look at movies that have died in the studio system and not been made for one reason or another. ‘Dumb and Dumber To’ is another example of that.  These are movies with great talent attached and a studio’s attention, but for budgetary reasons, scheduling or content, couldn’t get greenlit.

What stalled its progress at Warner Bros.?
Aziz: The material was out of the studio’s sweet spot. The studio wanted to set a very specific ceiling as to how much to spend for Leo and Marty to do justice to the movie. Marty and Leo looked at the numbers the studio was putting forth and they were not comfortable with it.

McFarland: I don’t think a lot of people ‘got it.’ They saw it as another Wall Street movie. The real substance of the material went over people’s heads. I can’t tell you how many times people said I didn’t get it, but now that I’ve see the movie I get it.

The constant drug use and nudity couldn’t have helped.
Aziz: Studios are more comfortable with special effects and blockbusters. But I still think there’s a very strong marketplace for adult-oriented drama and comedy.

McFarland: We want to be extremely artist-friendly. We want to do something a little different, but attract talent and work with studios at the same time. With that mentality, you have to take risks. This was risk for a lot of people. For us, it’s an opportunity.

And you convinced Warner Bros. to hand it over?
McFarland: It was Leonardo’s favorite character he’d never gotten to play. We went to Jordan Belfort and met him numerous times. Over the course of about 6 months of negotiations we purchased the underlying rights to both of his books. We circled back to Warner Bros. and began the long, long process of extracting the script, which was not easy to do.

When they decide to not make a movie, they don’t want anyone else to be successful with it. I don’t know if they thought we’d be successful in making it, but given the long-term relationship between Warner Bros. and Leonardo, they didn’t want to stand in his way.

This movie is one of many opening this year where you have a prominent filmmaker working with outside financiers. Studios are still distributing these movies, but a lot of the top filmmakers of this era are having to secure financing outside the studio system.
Aziz: I don’t see independents like ourselves as competitors to studios. We’re complementary. We can take a lot of risky things they have sitting on the shelf and get it made. Studios can then put those together with their other franchises.

What was riskiest about this?
McFarland: The sex, drugs and rock ‘n’ roll. We all rely on the worldwide box office. Certain content is more accepted in certain parts of the world than others. When you decide you want to push that envelope and creatively free Marty and Leo, and you show the amount of drug use and language and sex, you have to know what you’re getting into. We know what our risk tolerance is, and we feel very confident we’ll be very safe on Christmas.

Was Scorsese attached when you bought the script from Warner Bros.?
McFarland: No, but he was attached six years ago with Leo when it died at the studio. He had helped develop it, so we felt very confident we could reconnect him. Marty is 71; he’s very selective. But we had a New York story, Leo, content he helped develop and Terence Winter [the screenwriter who created “Boardwalk Empire,” the HBO show for which Scorsese directed the pilot].

Grantland’s Wesley Morris proclaimed your movie the “funniest American movie of the year.” Were you surprised that the Hollywood Foreign Press nominated “Wolf of Wall Street” as a comedy?
MacFarland: If you were to ask Marty, he’d say ‘Goodfellas’ was a comedy.  When we looked at our movie, we never looked at it from a genre perspective as a comedy. We always knew it was funny.

Aziz: The decision to cast Jonah [Hill] was a strong signal this is not a drama from the 1990s.

Jonah is exceptional. This movie has such a strong cast, but some of the choices are unexpected. Was there any particular choice that you fret over the most?
McFarland: The one role that was groundbreaking and flat out genius was Matthew McConaughey. The Mark Hanna role is a very small role; it’s a cameo role. But I looked at it as a Darth Vader-type who brought Luke to the dark side. Mark Hanna represented a lot of the negative attributes of Wall Street. It had to be an iconic moment. It had to be an actor we all believed in and wanted to emulate.

Matthew is coming off a massively awesome year with ‘Mud’ and ‘Dallas Buyers Club.’ Marty looked at Matthew, looked at his work and were really blown away. Little did we know Matthew could come in and smack it out of the park. He changed the entire movie.

How so?
McFarland: That chant you see where he beats his chest, Leo brings it back later in the movie. He created a battle cry for these guys. He created a cult-like ritual among thousands of young stockbrokers.

Do you think ‘Wolf’ will appeal to a broad audience?
McFarland: When you have Marty and Leo — their brand is so strong – coupled with this material? I think it will be a huge shot into pop culture and is immediately going to invade every sector of people’s lives.

Aziz: It stands up to repeated viewings.

Did you have any hesitation about its length?
McFarland: Length is not about minutes but about how you feel. My partner and I watched a movie last night, we won’t say what it was, but it was two hours and 20 minutes and felt like four hours.

What about the people who go on Fandango and don’t know that? All they see is two hours and 59 minutes.
McFarland: Those people who don’t go see it, their friends will tell them how they loved it. It’s a big commitment for some people that aren’t cinephiles. The good news is it’s opening at Christmas when people are off work and on vacation. You have to go see the movie on Christmas Dy with your family and friends.

Aziz: It plays way better when you see it the second time around.