The 21-year-old woman, who works for SumOfUs as a researcher, was in a virtual room on Horizon Worlds, a metaverse platform released last December in the U.S. and Canada. She was in the room with two male avatars that were making obscene comments to her, and one of them was very close to her. SumOfUs included a clip of the event in its report this month focused on sexual violence, hate speech and content moderation issues at Meta.

Sexual harassment has been an ongoing issue that SumOfUs is researching. Earlier this year, another woman named Nina Jane Patel reported being “virtually gang raped” within a minute of logging onto Horizon. A group of three to four male avatars groped and “verbally and sexually harassed” her avatar, which became “a target for suggestive and lewd remarks due to her avatar’s outwardly female appearance,” the SumOfUs report noted.

Another user Chanelle Siggens was approached by a player in “Population: One,” a VR game created by a publisher owned by Meta, when the avatar simulated “groping and ejaculating onto her avatar,” according to the report. Others report being harassed multiple times per week on these virtual platforms.

While Meta has added some safety measures as these reports have surfaced, the research group said these actions are not enough to curb sexual harassment in the metaverse. Additionally, these behaviors are happening across other apps beyond the ones owned by Meta. Many of them are accessed through Meta’s Oculus Quest, the headset maker acquired by Meta in 2014.

“These troubling events are not isolated to Meta-owned apps. VR users have long reported problems with sexual harassment, verbal abuse, racial slurs, and invasion of personal space on a myriad of apps (not owned by Meta) such as Rec Room, VRChat, and AltspaceVR.25 Many of these apps remain accessible via Meta’s Oculus Quest,” SumOfUs researchers wrote.

In February, Meta added a personal boundary feature that allows Horizon users to set a distance of four feet from other avatars. It is activated by default and can be turned off by the user. Users also have the ability to block others on these apps and report others after a negative experience.

“Developing for VR presents what are perhaps some of the hardest challenges we’ve tackled in a generation of computing now that we’re no longer limited by fixed viewpoints and traditional flatscreen devices,” the company said in the post. “By preventing avatars from coming within a set distance of each other, Personal Boundary creates more personal space for people and makes it easier to avoid unwanted interactions. We’ll continue to iterate and make improvements as we learn more about how Personal Boundary impacts people’s experiences in VR.” 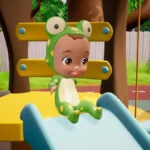 Also Read:
How a Children’s TV Show Is Paving the Way for Metaverse Entertainment | PRO Insight