If you thought watching Godzilla and King Kong fight for global super-monster supremacy was epic, wait until you watch the two movies in Sara Colangelo’s “Worth” duke it out. On the one hand, this real-life 9/11 drama is a triumph of the human spirit, and on the other, it’s a triumph for corporations convincing the families of 9/11 victims to waive their right to legal recourse in a desperate attempt to weasel their way out of getting sued.

“Worth” tells the story of lawyer Kenneth Feinberg, played with a gravely, drawling austerity by Michael Keaton. In the college course he teaches, Feinberg invites his students to ponder the question, “What is life worth?” — but not in the usual philosophical sense. He’s asking his class to engage in a difficult legal conundrum that comes up all too often: in the case of wrongful death, how does a lawyer determine how much money the victim’s family is owed?

Feinberg considers himself an expert on this subject, so after the tragic events of 9/11, he volunteers to become the “Special Master” of the September 11 Victim Compensation Fund, which offers monetary restitution for all the lives lost that fateful day. But as pitched in the shadowy halls of the U.S. government, it’s not out of the goodness of the country’s heart. It’s very specifically so that the airlines won’t get sued into oblivion, which could — potentially — shut down the nation’s airports and grievously injure the economy. 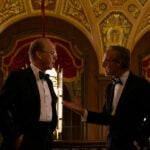 So it’s up to Feinberg, his partner Camille Biros (Amy Ryan), and their team of legal experts to come up with a formula that determines the baseline financial value of every American who died in 9/11 and then get at least 80% of the victims’ families to agree to that mathematical equation. And they also have to do it within two years, or else America’s economy will, we are told, basically explode.

Colangelo’s film, written by Max Borenstein (“Godzilla vs. Kong”), tells the story of lawyers who consider themselves objective, and considers that objectivity noble. But as the stories of the victims are told — in long montages of brief but intense monologues from a vast and strong ensemble cast — Feinberg realizes that the September 11 Victim Compensation Fund can’t be cold and calculating. No two victims were alike, and many of their lives and next of kin defy simple categorization. 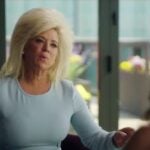 But although Keaton effectively dramatizes the emotional and ethical shift in Feinberg — mostly through debates with Charles Wolf (Stanley Tucci, “The Witches”), who objects to the fund’s objectification of the victims and their families — Colangelo’s film can’t quite sell the idea that the journey is satisfying or heartwarming, particularly when it arrives at a Capra-esque happy ending.

Borenstein’s screenplay does a fine job of explaining complicated ideas in simple terms, and the dreary and severe cinematography of Pepe Avila del Pino (“The Kindergarten Teacher”) is even more effective at conveying just how conspiratorial the political origins of the fund really were. So although the conclusion of “Worth” clearly wants us to believe that Feinberg and his team did the right thing, because the families of the dead have come to accept their generosity, all those good feelings are trapped within a cynical political framework, where ultimately all this was possible only because these victims are agreeing not to sue any corporations or make waves in Washington.

Watching all these tender and genuine performances go to war with a bitter political reality would be captivating if it felt like that was the point of “Worth.” But instead Colangelo’s film seems content to focus on Feinberg’s Scrooge-like virtuous character development and the moral questions involved in making his algorithm work. Meanwhile, the more captivating — and far less inspirational — ethical questions raised by the film’s first act are underserved.

If you were watching “Worth” with old-fashioned 3-D glasses, with a blue lens that can see the schmaltz and a red lens that can see the grit, you could simply close one eye and choose which movie you get. And each individual film might work reasonably well on its own. But when viewed with both eyes open, “Worth” is a thematically confusing motion picture, no matter how good the acting is. If the film exists to sell us on how great the fund was, it blew it, because we’re left with troubling and unanswered questions. If the film exists to raise those questions, it cops out by resorting to treacly melodrama. And it cannot effectively do both.

All “Worth” can do, perhaps, is offer platitudes that placate people emotionally and make it seem like the matter is settled. And even that, “Worth” also claims, is arguably unjust.

“Worth” premieres Sept. 3 on Netflix.