Watching Ti West’s “X” (now in theaters from A24) feels like you are watching a classic horror film, one that was secreted away for decades because it’s just that extreme and scary.

It concerns a group of amateur pornographers (including Mia Goth, Martin Henderson, Jenna Ortega, Scott Mescudi and Brittany Snow), who travel to a backwoods Texas farmhouse to shoot their magnum opus “The Farmer’s Daughter.” Of course, while filming their cinematic triumph, they run afoul of the home’s elderly owners, including Pearl (also played by Goth), who longs to reclaim her youth by murdering everybody in the process. “X” is, in part, a throwback to old-school slasher films of the 1970s and ‘80s but it’s much more sophisticated and emotional than that; it’s a nuanced look at how the aging process can turn you into a monster. Youth is wasted on the young, indeed.

West had spent almost a decade making creepy horror movies that burrowed inside your brain and stayed there – things like “The House of the Devil” (which turned The Fixx’s 1983 bop “One Thing Leads to Another” into an ominous portent of doom), “The Innkeepers” (a thoroughly modern haunted house story centered around a couple of slacker ghostbusters) and “The Sacrament” (a found footage take on the Jonestown massacre). In 2016 he took a sharp left turn, writing and directing “In the Valley of Violence” for producer Jason Blum. It had movie stars (Ethan Hawke, John Travolta, Karen Gillan) and widened the scope of what a Ti West movie was. Hardly anybody went.

After “In the Valley of Violence,” West got offered to direct an episode of television. It quickly turned into more and more episodes. “I got a chance to direct 17 episodes of television shows in a very short period of time,” West said. “And I was having a blast doing it. But while I was doing it, because it’s a different kind of job, I was thinking about, well, eventually I’ll go and make another movie. I’m enjoying doing this, but I’m going to go back and make a movie. And I was trying to figure out like what that movie might be.”

West tried to think about whether or not the new movie would be a horror movie. Or whether he wanted to go back at all. “It’s very traumatic to make a movie,” West said. Instead, he started thinking “about what I liked about movies in general.” He hit upon the technical aspect of films, particularly horror films – “it’s what I remember being most enthralled by, I suppose, whether it be practical effects or camera direction or music or all these things that have been very viscerally effective over the years for me.” 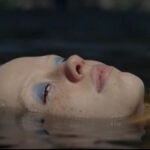 West wrote the “X” script in secret, inspired in part by landmark ‘70s movies such as “Two-Lane Blacktop” and “Don’t Look Now,” and sent it to A24, the indie art house darlings behind such sensations as “Moonlight,” “Under the Skin” and “Uncut Gems.”

“Look, one’s read this, no one even knows I wrote it. But like if you dig it, maybe this would make sense,” West told A24. According to him they “flipped” about the script.

A24 picking up the project also added another subversive layer, as they have become known as the premier destination for so-called “elevated horror” (things like “The Witch,” “Midsommar” and “Saint Maud”). West said that it “did not occur to me.” Instead, he was simply drawn to the studio. “A24 is as a studio is making the most interesting, generally speaking, most director-driven films. And I think it’s very rare that you’re interested in a movie that they released no matter who made it, because you’re like, well, they must have seen something in this and I’m interested,” West said. “As a filmmaker, I feel that way about them and they’re very respectful of filmmakers. They were just the sensible place to go to for me, first and foremost.”

And while “X” does indulge in more base pleasures (an abundance of nudity and a truly incredible amount of gore), West argues that it could be classified as “elevated” due to the sophistication of the craft. “The craft of the filmmaking in the movie is like very meticulous, which is like maybe separates it and puts it into an elevated category,” West said. 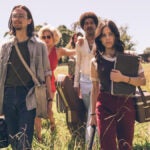 “X” had a unique shoot. COVID hit and filming in the states became impossible. Also, West wanted to shoot in the summer to maintain the appropriate, sun-dappled atmosphere. They realized they were going to have to push it another year but A24 didn’t want to wait. That’s when they started looking at filming locations in the southern hemisphere and soon the perfect candidate emerged, like an alligator slithering out of the reedy marsh grass: New Zealand. There were zero COVID cases, perfect for a movie that, as West notes, you couldn’t make with social distancing. After spending two weeks in quarantine, “it was as if COVID didn’t exist,” West said.

There was another bonus to shooting in New Zealand: the crew. “We were very fortunate that James Cameron was on hiatus from ‘Avatar,’ so that crew was available. We inherited that whole crew,” West said. “We got a very terrific crew that was very accustomed to being on a blue screen stage for a very long period of time. And we were like, ‘Come out in the woods with us and make a crazy movie!’” Also aiding in the making of “X” was the Wētā Workshop, which supplied the film with its make-up and creature effects, of which there are plenty.

One of the things Wētā was tasked with was turning Goth, an actress in her late 20s, into a wizened, murderous crone. It was a character that was so affecting that West decided to co-write (with Goth) and direct a prequel to “X” in secret. (If you stick around after the credits you’ll get your first glimpse of “Pearl.”) “It was a completely different experience making it, but we had a one-month hiatus of prep in between the two shoots. It happened very quickly,” West said. The team wrapped “X” and went into prep on “Pearl.” “There wasn’t much time off,” West said.

Of course, creating a movie without anyone knowing about it has its drawbacks. “Now that everyone knows there’s a second movie, I’m trying to keep a lot of what the second movie is, a secret,” West said. Still, he did admit that the new movie is “a very different experience.” Stylistically the two films are worlds apart “but they enrich each other in a really cool way. And I think if you like ‘X,’ you’ll like ‘Pearl’ and vice versa. There’s a lot of connective tissue between the two that I think enriches the movie.” While A24 hasn’t announced a release date for “Pearl,” West admits that it “shouldn’t be too long” before more information is revealed. Still, he warned: “Whatever you think ‘Pearl’ is, it’s not that. The odds of anyone predicting what that movie is, it would be like you’d won the lottery.”

And that’s not all. West has previously alluded to a sequel for “X” too, noting that if you’re going to make a slasher, you should have a bunch of sequels ready. (And – spoiler alert – Goth’s young character Maxine lives until the end.) West said that A24 has been more than game and that “the whole experience has been miraculously great.” But he isn’t ready to spill the beans yet. “I’ll have more to say about that after ‘Pearl’ comes out. One thing at a time,” West said. “But let’s put it this way, it will make sense. There’s a lot of things that if you zoom out and see the whole picture, there are not arbitrary reasons of things are what they are.”

In a world where studios labor over the construction of vast, interconnected cinematic universes, West created one for “X” almost by accident, behind a barn in New Zealand during a global pandemic.