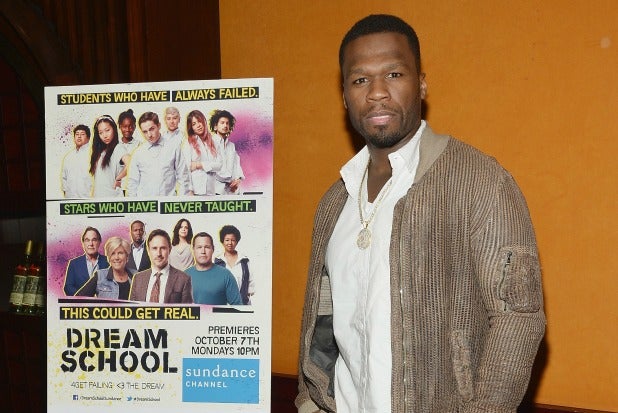 Anyone lamenting the strained relationship between hip-hop and LGBT people might want to watch 50 Cent’s “Dream School.”

The show focuses on helping students dealing with violence, poverty and pregnancy, as well as Alan, a transgender boy who was born a girl.

“I want to graduate and get away from the people at my school,” Alan says on the show, premiering next week. “I got bullied. I went to the hospital. My mom just didn’t even visit me. I wish I was the person my parents wanted me to be. I wish I was born the person I am now because… I was born a girl.”

He now has an advocate in a rapper who’s first big hit, “In Da Club,” includes the line, “You that f—-t ass n—a trying to pull me back, right.”

The 50 Cent of today — an actor, philanthropist, and the executive producer of “Dream School” — isn’t the same person who delivered that line a decade ago.

But 50, born Curtis Jackson, says he was never a homophobe. He says some listeners are too quick to assume every line in every song reflects the performer at all times.

“I don’t have homophobia. I never did,” Jackson told TheWrap.

The rap icon has been accused of anti-gay comments outside his music. But in a genre long-tainted by homophobia, he was also open and supportive of his mother’s same-sex relationship, years before Frank Ocean’s coming out made many rappers rethink their prejudices.

“When you actually make music that mirrors the environment, you use the terminology,” he said. “You use the language. Like if you were making a painting, and you were painting the American flag, if I told you to do that, and not use red, not use the harsh terms or the tougher messages, you would never successfully paint the flag.”

He adds: “I would use the terminology that would be going around. My grandfather may say terms — people may actually say terms based on their experiences that were happening at that point. … You’ve got people that would call some people a redneck, or some people n—-. It’s the term of that time or that period. They’re not necessarily racist, but they’ve heard those terms used around them, and they use them.”

Jackson volunteers that he was also accused of homophobia after a 2004 Playboy interview. “I remember it specifically because it was mind-blowing to me that it went out that way,” he said. “The actual interview, it was a long interview. They wanted to deal with me for five hours. And he kept asking me questions, circling back to that, circling back. And I didn’t understand why.”

A year later, he caught fans’ ears with the opening line of “Hate It Or Love It,” his collaboration with The Game: “Coming up I was confused, my mother kissing a girl,” he rapped.

“My mom — that’s all I know of my mom,” he told TheWrap. “When I tell you she’s the most important thing that I’ve had in my life, because I don’t know my father at all, she’s all I have — it makes it clear that I don’t actually have those issues.”

Television has helped tear down fears of same-sex marriage equality by letting heterosexuals see gays as simply people, no more noteworthy for their sexuality than anyone else. It’s beginning to happen with transgender people, too, thanks to appearances like Chaz Bono’s turn on “Dancing With the Stars.”

But hip-hop has never been at the forefront of that trend. Jackson believes the music is changing.

“When new artists or new approaches come to the culture, it grows,” he said.