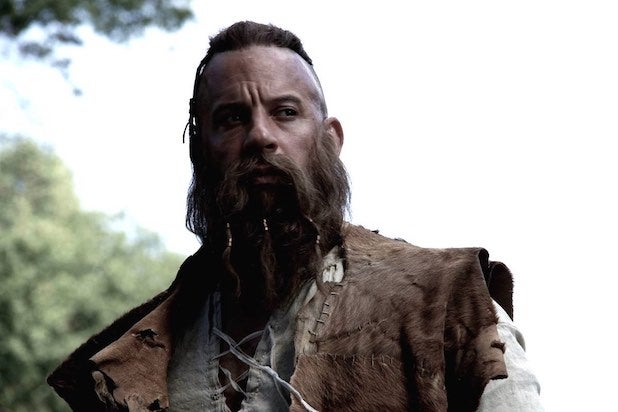 Vin Diesel‘s “The Last Witch Hunter” should be the final time he plays this character, according to the majority of critics cursing the fantasy film.

As of Thursday afternoon, the Summit Entertainment release scored a mere 18 percent approval rating from a total of 45 critics counted on Rotten Tomatoes.

Why so low? Bad acting, poor CGI, dense exposition, a bad script, and an overly serious tone for such a silly premise were among the complaints pouring in from outlets posting reviews ahead of the PG-13 action movie directed by Breck Eisner (“The Crazies”), based on an original story its star helped develop.

See Video: Vin Diesel Plays a Round of Dungeons & Dragons for 'D&Diesel'

If Diesel’s fans are just going for the action scenes, TheWrap‘s Inkoo Kang warned her readers “the editing is occasionally so choppy it’s difficult to discern what’s happening on screen.”

“The narrative elasticity of magic — you can do whatever you want, whenever you want, to whomever you want — makes for a weightless story with little logic or stakes. The convoluted plot feels driven by the special effects instead of the other way around. Witches and warlocks are formidable until they’re not, and fragile as a sugar cube when director Breck Eisner has a new visual he wants to show off,” Kang wrote in her review. “‘The Last Witch Hunter’ aims for pulpy, comic-book fun, but it’s never as fleet, funny, or detailed as it needs to be. And if you’re looking for something above middling in terms of plot, characters, world-building, even action sequences, you’ll need to seek it elsewhere.”

See Video: Vin Diesel Faces Down Body-Shaming Trolls About 'Dad Bod' Photos: 'I Can Take It'

If you’re still deciding whether or not to gamble the cost of admission on what critics have deemed a Diesel dud, take a look at eight more of the worst reviews available (so far) below:

“It’s just deadly and dreadful, loud and obnoxious, convoluted and irritating, horrible and dumb. Vin Diesel lumbers and mumbles his way through a performance so bad it makes his work on the ‘Fast and Furious’ franchise look like vintage Tom Hanks by comparison.”

“Seemingly every time there was an opportunity to do something fun, ‘The Last Witch Hunter’ runs in the other direction, creating an unfortunately heavy-handed, humorless, self-serious tone for a story that should be allowed to be a little goofy. It should be crazy fun on paper — Vin Diesel murders witches with a flaming sword!–but the only thing ‘The Last Witch Hunter’ will successfully eradicate is insomnia.”

See Video: 'Pride and Prejudice and Zombies' Trailer Adds the Art of War, Lots of Blood to Jane Austen Classic

“‘The Last Witch Hunter’ is a horror-comedy. As horror, it is laughable. As comedy, it is horrible — except for a couple of silly Vin Diesel moments as he plays the title character. Designed as a possible movie franchise for Dungeons & Dragons freaks, but likely destined for the box office trash bin, ‘The Last Witch Hunter’ takes place in contemporary times with a prologue set in the mid-1300s … There is not a single scary moment in the movie, despite the overwrought efforts of the effects team deployed by genre director Breck Eisner. Meanwhile, the chunky and clunky Diesel cannot effectively deliver most of the funny lines, either. So ‘The Last Witch Hunter’ fails to find the right tone. It is not even bad enough to be good camp comedy.”

“The movie left me amazed — amazed that Nicolas Cage wasn’t in it. Sorting out the storyline is like being Medusa’s barber. For director Breck Eisner and his screenwriters, the magic word is ‘randomly': Randomly, Eisner keeps whipping up freaky digital effects, then explaining what happened later, if at all… Memo to screenwriters: Try to figure out the movie you’re working on before you worry about setting up the sequel.”

We Got This Covered critic Isaac Feldberg:

“Robust and ridiculous, single-minded and empty-headed, ‘The Last Witch Hunter’ is about as unremarkable as it is structurally adequate. That’s not exactly praise, but this Vin Diesel-powered would-be series starter isn’t looking to win any awards – it was manufactured on some studio assembly line, designed to check just about every box it needs to pass muster with general audiences while world-building effectively enough to launch a new action franchise for the ‘Fast & Furious’ star.”

“The visuals in this are decent at best and cringe-worthy at worst. For example, a digital reconstruction of actress Dawn Olivieri‘s haggard face had my audience snickering through an entire shot. Ultimately, though, the action is outweighed by the eye-rolling dialogue and lifeless storytelling. While loyal fans of Vin Diesel may find bits and pieces to enjoy in ‘The Last Witch Hunter,’ it’s not enough to justify the price of admission. If anything, it’s a rental — or you could just read a graphic novel instead, which is probably what ‘The Last Witch Hunter’ should have been in the first place.”

“This is a relentlessly unengaging affair, its derivative and logic-deficient script matched by flat direction and fussy, unconvincing CGI. The performances are particularly rotten: we expect Vin to wobble about like a half-inflated penis balloon with a face scrawled on it, but [Michael] Caine and Elijah Wood (playing his fellow priest) should know better; and the cut-glass-posh Leslie is simply unbearable – picture Princess Beatrice on a gap year working in a Manhattan goth bar. A hideous electro mangling of the Stones’ ‘Paint It Black’ over the closing credits adds insult to injury. But hey, at least that means it’s over.”

“I say from some experience that there’s a lot to recommend in a good ol’ game of Dungeons and Dragons, especially if you have a little imagination. There’s absolutely no reason to sit down and watch someone else do it, though, which is — several million dollars of computer effects notwithstanding — all ‘The Last Witch Hunter’ really amounts to.”