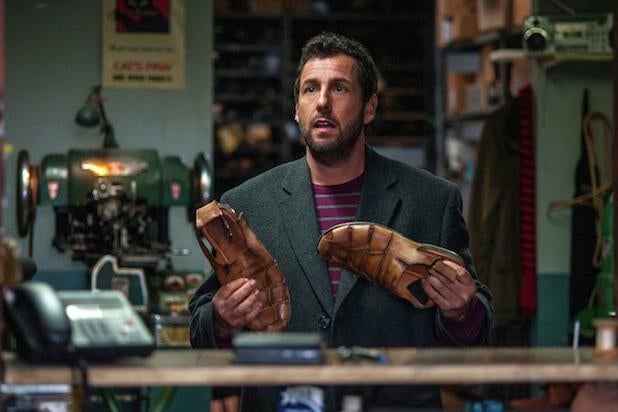 Whether he’s behind or in front of the camera, Tom McCarthy has had a fascinating career. The director’s latest indie movie, “The Cobbler,” makes its world premiere in Toronto this week — the second Adam Sandler movie to debut at this year’s festival.

Sandler stars as a New York cobbler who inherits a magical machine that gives him the ability to step into other people’s shoes, live their lives, and for the most part, do some good in his community.

McCarthy co-wrote the script with Paul Sado and the film was produced by Mary Jane Skalski. WME Global is shopping domestic rights to the hot acquisition title, while Voltage Pictures is handling international.

McCarthy, who earned an Oscar nomination for co-writing Pixar’s “Up,” spoke to TheWrap several days before the festival started. Here’s what he had to say.

TheWrap: I saw the film as a kind of indie response to the blockbuster superhero craze of the moment. Is that fair or am I reaching with that interpretation?
Tom McCarthy: Maybe it was on some level, subconsciously, but I don’t know what people expect anymore. I became enamored with playing with genre and telling this story through my lens and keeping true to character and asking, ‘how can we ground this?’ Not many people are going to know much about this story, hopefully. I mean, when you see “Spider-Man,” you know what you’re getting.

Now, those are really well-made movies by a lot of talented people. Marvel especially — they get great directors and actors to do high-level work. But this film is not really a response to that. Maybe there’s an element of that, because almost everyone I know is going to work on one, or working on one. That’s just the reality right now. But there is a market for other kinds of films. You can’t live on a steady diet of superhero films. There’s still an audience for original movies, it’s just getting to harder to think of them.

Audiences like being challenged and having their expectations upended. I know those are my favorite kinds of movies — the ones that get people talking. Superhero movies are beautiful and slick and gorgeous but sometimes, that’s it. They don’t always leave you talking.

Whether it’s good or bad, I just want people to have an opinion. I want to engage them. So I’m excited to see how the audience responds to this one. You always need that final piece, which is their involvement. It’s crucial and exciting. We just tried to keep it real and honest and play with genre throughout. It still embraces what we like about all the genre beats, and it has some hairpin turns. I found it challenging but I had a lot of fun making it.

So how did you wind up casting Adam Sandler, who isn’t the first actor who comes to mind when I think about a Tom McCarthy movie, but was quite good regardless?
I had him in mind. I was doing research in sections of Brooklyn like Sheepshead Bay and Brighton Beach and I saw a lot of guys who weirdly reminded me of Adam. He kind of popped into my head and the more I thought about it, the more I thought it was a cool way to use him. I’d always heard he was a great guy to work with. So we reached out to him and he was responsive. That part was easy. He just jumped in and was a great collaborator throughout. He had a lot of thoughts [about the character]. So we wrote it with Adam in mind. Once we had our idea and place, we put [the project] together quickly last fall and the pieces just fell into place. Sometimes that happens. There’s no rhyme or reason to it. The first time we spoke, Adam told me that “Sandler” means “cobbler” in Hebrew. That was the beginning of many good omens.

What about Method Man, who I also really enjoyed in this film. He showed me something new here.
Method Man is the sleeper weapon of the movie. He’s funny and real and scary. He happens to have great range. People have come up to me and told me, ‘I kind of started to like him before I realized he was a bad dude, and that confused me,’ but to me, that’s good. That’s what bad dudes do!

Did Sandler lobby for you to cast Steve Buscemi or was that reunion just a happy coincidence?
We’d thought of Buscemi for it and I didn’t even know how close they were. They’ve known each other for 25 years! It made even more sense for the characters and the relationship. Sandler and Dustin Hoffman also go way back and they’ve wanted to work together. It just worked out to our advantage.

Striking the right tone is always tricky, so how did you find the right balance between magical realism and dark comedy.
It’s always challenging. It’s like a fairy tale on some level. There are always traumatically violent moments — tragedy and mistakes and human error. Every movie has them. “X-Men” starts with the Holocaust. Even a Disney movie, with Bambi’s mom getting killed. “Up” and “Finding Nemo”  each had these tragic moments that propel the characters, so I felt well-sourced in that.

One of the themes of this movie is the power of community, as represented by Melonie Diaz‘s character, who supports local businesses. Can you talk about that?
It’s about keeping the neighborhood together, having pride in the work you do and not looking at the guy next door and what you don’t have. I mean, find the word “hipster” demeaning — but whether it’s people making chocolate or jeans or beer or coffee, there are so many smart young people committing themselves to a specific trade. It’s more about quality than ambition. We’re driving at that with this movie.

I have to say, I did not see that last twist coming…
If you watch the movie with it, it’s really clear. There’s a lot of stuff that pays off. [Redacted Spoiler] does it so well — little things, like the stitcher scene where he has a proud, happy look on his face. It doesn’t play that way though, so you have no idea where it’s going. We want people to go for the ride and come in and enjoy it.

We have a lot of little tropes that you pick up on second and third viewing. We were subtle with it. The pickling company felt rooted in the community. A heavily populated immigrant area, of course they love pickled goods! That’s why we started in 1903 with all these tradesmen. It was rooted in history. We also wanted to give a sense of what was coming without giving it away. It was a lot of fun having the opportunity to work backwards. We didn’t have to fulfill anything.

Also read: Jake Gyllenhaal In ‘Nightcrawler’ Reveals an LA On the Edge

So without giving anything away, this movie sort of sets up a sequel. Is that part of the plan?
[The story] just sort of led us there. We didn’t set out to write it. I never think about sequels, but if any of my movies lend themselves to a sequel, this would probably be it.

“The Cobbler” is an acquisition title, so what are you looking for in a distributor?
I’ve done this with every one of my movies — we just want someone who’s passionate and excited about it and gets it and loves it as much as we do. It has a lot of upside for a distributor. It’s definitely unique. I don’t know anything else like it right now.

And finally, what does TIFF mean to you?
Well, “The Visitor” premiered here and “The Station Agent” came here, so I think it’s a great city for a festival. It’s such a lovely place and it makes such sense because people are culturally aware. I actually get stopped on the street a a filmmaker. It’s usually as an actor. But I was [recently] at breakfast and heard a couple talking about it. There’s real excitement in the air here.