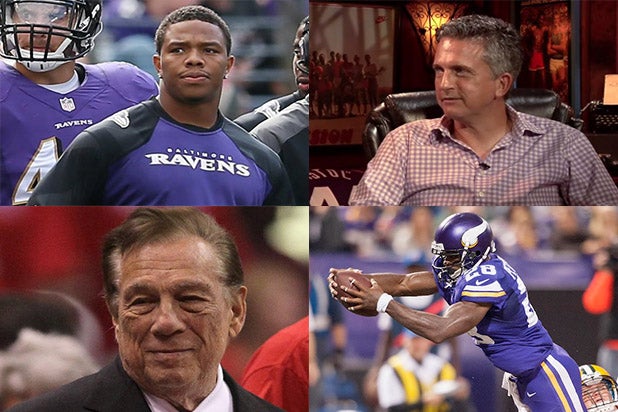 It was a big year in sports — and we’re not talking about the Seattle Seahawks winning the Super Bowl or the San Francisco Giants taking home the World Series yet again.

The past year will go down in history as when the NFL was rocked by a domestic abuse scandal that sent the Commissioner scrambling to save his job, Donald Sterling was ousted as owner of the L.A. Clippers, and countless sports stars were slammed, suspended or cut for their big mouths and bad behavior.

Below are the controversial storylines surrounding the athletes, TV commentators, CEOs and executives who took “unsportsmanlike conduct” to new levels in 2014.

Ray Rice went from being the Baltimore Ravens’ star running back to the face of the NFL’s domestic violence debate when video emerged of him dragging his unconscious then-fiancée from an Atlantic City casino elevator following a physical altercation between the two in February. An initial two-game suspension netted Commissioner Roger Goodell and the NFL’s conduct policy real estate under the microscope, but a second video depicting Rice knocking Janay Palmer out put the league in full crisis backpedal. Rice was ultimately cut by the Ravens, but criminal assault charges against him were later dropped and he was reinstated by the league on Nov. 28. Rice has yet to be picked up by a team. As for Goodell, he admitted in September that he “got it wrong” in his initial handling of the case, and revealed a new personal conduct policy this month in response to the outcry.

Adding to the mounting list of scandals rocking the NFL, Pro Bowl running back Adrian Peterson was indicted by a Texas grand jury in September on charges of injury to a child after allegedly beating his four-year-old son with a switch. Peterson was subsequently dropped by the Minnesota Vikings — and millions of fantasy football teams — and suspended by the NFL. He reached a plea agreement with a Texas court in November, but is currently on unpaid suspension until spring 2015, which he is appealing on the grounds that he was “made an example out of.”

In an act of defiance over the non-indictment of the police officer who fatally choked unarmed black Staten Islander Eric Garner, numerous NFL and NBA players wore shirts emblazoned with the “I Can’t Breathe” rallying cry to protest the New York grand jury’s decision in early December. Detroit Lions running back Reggie Bush and Cleveland Browns safety Johnson Bademosi brandished the message on their shirts during pre-game warmups, while St. Louis Rams offensive lineman Davin Joseph wore it on his cleats. NBA star Derrick Rose also made a stand in protest, but it was LeBron James who caught the attention of the public — and President Obama — when he raised awareness about police brutality using Garner’s final words.

With the team headquartered less than 10 miles from Ferguson, Missouri, some St. Louis Rams players put their hands up in protest over the shooting death of Michael Brown during pre-game introductions before their matchup against the Oakland Raiders on Nov. 30. Wide receivers Stedman Bailey, Tavon Austin, Chris Givens and Kenny Britt and tight end Jared Cook simultaneously mimicked the stance reportedly taken by the 18-year-old before officer Darren Wilson shot and killed him last August. The grand jury decision not to indict Wilson sparked widespread protests and riots in the Missouri town, while the St. Louis Police Officers Association condemned the players’ actions, calling them “tasteless, offensive and inflammatory.” The Rams later stood by their pledge to support the people of Ferguson by contributing $10,000 to local charities.

First instituted in Boston in 1933, the Washington’s Redskins name reached new heights of controversy 82 years later, with Native American groups, sports analysts and political pundits campaigning for change. Owner Dan Snyder has steadfastly refused to alter either the name or the logo, despite numerous commentators refusals to even say the word “Redskins” while calling their games. Attributing his stubbornness to fans’ memories of a “personal history with the team,” Snyder contends that it honors Native Americans, despite a letter signed by half of the U.S. Senate and criticism by President Obama, along with opposition from several civil rights organizations.

The Los Angeles Clippers owner went from obscurity to infamy when audio that captured his racist remarks to female friend V. Stiviano — particularly about NBA great Magic Johnson — went viral. Threats of player boycotts followed as the 80-year-old made increasingly erratic comments, including a baffling appearance on “Anderson Cooper 360.” NBA commissioner Adam Silver took a firm stance, banning Sterling from the league for life and fining him $2.5 million. In May, Sterling’s wife, Shelly, agreed to sell the team to former Microsoft CEO Steve Ballmer for $2 billion, which finally went through in August.

There was discontent in the ranks at ESPN in September when network heads suspended columnist and on-air personality Bill Simmons for three weeks following a profane rant against Commissioner Goodell in his “B.S. Report” podcast. In the tirade, Simmons both blasted the NFL chief over his handling of the Ray Rice assault case and taunted his bosses to punish him — which they did. “He is lying. I think that dude is lying. If you put him up on a lie detector test that guy would fail,” said the Grantland editor-in-chief. “I really hope somebody calls me or emails me and says I’m in trouble for anything I say about Roger Goodell, because if one person says that to me, I’m going public.”

Tony Dungy was once a highly-respected coach in the NFL and the man who presided over Peyton Manning’s rise to stardom with the Indianapolis Colts. NBC’s current “Football Night in America” analyst is also known as a man of great faith and high moral character. So he probably wishes he could take back comments he made about the St. Louis Rams’ selection of openly gay player Michael Sam at the end of the 2014 NFL Draft. “I wouldn’t have taken him,” Dungy said in an interview with the Tampa Tribune in July. “Not because I don’t believe Michael Sam should have a chance to play, but I wouldn’t want to deal with all of it.” Dungy later backpedaled on the statements after being chastised by many critics in the sports world. Sam went on to receive the Arthur Ashe Courage honor at the ESPY Awards on July 16, but was later waived by both the Rams and the Dallas Cowboys practice squad.

Comedian Artie Lange posted several horribly racist and sexist statements on Twitter about ESPN “First Take” moderator Cari Champion in November, publicly playing out a solo sex fantasy in which she was a slave and he was her master. “Here’s the scenario I’m using to jer*off to chick on First Take I’m T. Jefferson & she’s my slave,” he wrote. “She beats the sh*t out of me & runs free.”

He continued, “I attempt to whip @CariChampion cuz she disrespected the Jefferson Plantation but she grabs whip & beats me I cu* like a fat founding father.” The tweets were so offensive that an upcoming Lange appearance on Comedy Central was canceled and ESPN imposed a ban on the comic. Lange later apologized, but behind the conceit of a comedian cracking jokes.

Charles Barkley was never one to hold his tongue when he played in the NBA, and now as a Turner Sports analyst, he has a regular platform for his grievances. In an interview with CBS Philadelphia radio’s “Afternoons with Anthony Gargano and Rob Ellis” in October, the Hall of Famer blasted what he described as “unintelligent” African-Americans who embrace thug culture and criticize others for not being “black enough.”

“For some reason we are brainwashed to think, if you’re not a thug or an idiot, you’re not black enough,” Barkley said in response to a question regarding a report that Seattle Seahawks quarterback Russell Wilson isn’t seen as “black enough” by some of his teammates. “It’s best to knock a successful black person down because they’re intelligent, they speak well, they do well in school and they’re successful … It’s just typical B.S. that goes on when you’re black, man.”

Accusations of sexual assault normally prompt the accused to act on their best behavior, but after the State Attorney found insufficient grounds to file charges against Florida State quarterback Jameis Winston following the Nov. 2013 accusations, the sophomore pressed his luck — first getting caught leaving a grocery store without paying for $32 in crab legs and then yelling an obscene meme aloud in a crowded student union.

Winston was able to weather the sex assault allegations, winning the 2013 Heisman Trophy. But his perceived arrogance in the wake of the controversy has made enemies of Florida State administrators, national media and just about any college football fan outside Tallahassee.