If you want to talk about the breakout hits of the 2014-2015 television season, there’s really only one place to start: “Empire.”

The deliciously soapy music-business drama, which mixes catfights with social commentary in its portrayal of a hip-hop mogul and his extended family, is the highest-rated scripted program of the year and the first series in more than two decades to see its viewership increase for each of its first five episodes; it also scored the top-rated season finale for any new series since “Grey’s Anatomy” in 2005.

As for why “Empire,” which stars Terrence Howard as mogul Lucious Lyon and Taraji P. Henson (pictured below) as his ex-wife Cookie, became such a sensation, co-creator Lee Daniels said flatly, “I think that the networks and the studios have underestimated the intelligence of the American public. White people want to see people that aren’t their color, black people want to see people that are their color. They want to see the truth, they want to see stuff that Norman Lear did back in the day. That, to me, is great television, where through humor we’re able to attack really important social issues. And so Empire was my attempt at it, in a very ‘Dynasty’-esque kind of way.”

TheWrap salutes a bakers’ dozen breakout stars of the season– starting, of course, with a pair from Daniels’ dynasty:

Taraji P. Henson, “Empire”
The first time Taraji P. Henson and Terrence Howard shared a screen was the 2005 movie “Hustle and Flow,” in which he played a pimp and aspiring rapper and she portrayed a pregnant hooker. Although Howard wound up with an Academy Award nomination and Henson performed on the Oscar show in the winning song “It’s Hard Out Here for a Pimp,” that breakthrough was nothing compared to the impact the pair have had on “Empire,” in which Howard plays a hip-hop mogul and Henson is his fiery ex-con ex-wife, Cookie, who struggles for her share of the dynasty she helped build. The sharp-tongued Cookie quickly became one of the most entertaining and iconic characters of the television season, replete with withering lines that Henson says were often inspired by her outspoken father. “She wears me out,” Henson has said of playing Cookie, “but I know this woman.”

Jussie Smollett, “Empire”
Asked how his life has changed since “Empire” became a sensation, Jussie Smollett laughs. “It’s probably easier to say what has not changed,” he says. “The great side of this is that I have a platform to show people what I can do, what I love to do and what I have been doing for so long.” Smollett was a child actor who appeared in “The Mighty Ducks” and “North,” as well as a recording artist who released the 2012 EP “The Poisoned Hearts Club” and subsequently signed a recording contract with Columbia. But nothing he’d done previously had the reach of Empire, on which he plays the gay son of Terrence Howard’s homophobic music-business mogul. The actor, who came out as gay on “The Ellen DeGeneres Show” in March, says he’s heard countless stories about how much his character has meant to young people who might otherwise feel alone. “I don’t believe you need a big hit TV show or a hit record to make an impact, but I’m glad that I can affect lives in the way my life was affected by people I looked up to,” he says. “It’s so amazing to be able to maybe change minds by simply doing what you love. If that’s not fulfilling, I don’t know what is.”

Tracee Ellis Ross, “Black-ish”
You could say that Tracee Ellis Ross broke out on “Girlfriends,” which ran for eight seasons on UPN and the CW between 2000 and 2008. But “Black-ish,” the ABC series in which she currently co-stars with Anthony Anderson, is putting her in front of a new, broader audience. “A very different group of eyeballs are definitely seeing me now,” she says. “For me, the most groundbreaking thing about the show is that usually, African-American families on television are families that happen to be black, and the stories are not told from that perspective. Our show is told from that perspective.” Ross, the daughter of singer-actress Diana Ross, also says she’s proud of the way the show deals with issues of racial identity and assimilation along with its humor, and of the fact that it has never asked her to be the usual sitcom wife, the “eye-rolling voice of reason” who acts stern while hubby gets all the laughs. “I trusted that they wanted the quirkiness of me, and that they were looking for a real woman, not some paper-thin sitcom wife,” she says. “By about the fourth episode, you begin to realize that she’s as crazy as he is.”

Bob Odenkirk, “Better Call Saul” (AMC)
“This is a huge leap for me,” says Bob Odenkirk, whose small role as a sleazy lawyer on “Breaking Bad” has spun off into the longtime comic playing the title character in “Better Call Saul,” Vince Gilligan’s follow-up to his Emmy-winning smash. “My character in ‘Breaking Bad’ was intentionally one-dimensional–he was a phony, a façade. So the opportunity to play this character at multiple levels, with a multi-faceted inner life, was more than I could ever have dreamed somebody would give me the chance to do. It’s a crazy bit of lottery winning.” The role has already won Odenkirk the Critics’ Choice Television Award as the year’s best dramatic TV actor, which is more success than he ever envisioned. “I’ve been doing this since I was 25, when I got my first job as a writer at ‘Saturday Night Live,'” says the 52-year-old actor. “I’ve had success and I’ve had a lot of failure, and I can go through it again and it won’t faze me.”

Titus Burgess, “Unbreakable Kimmy Schmidt” (Netflix)
“I find it both delightful and a little scary that suddenly this massive thing has happened for me,” says actor Tituss Burgess of his role in the Netflix series “Unbreakable Kimmy Schmidt,” in which he plays a struggling actor who’s the best friend to Ellie Kemper’s title character. The Georgia born actor has mostly appeared in theater until now, but says his role in the Tina Fey-created series has caused people to stop him on the street and sing to him. “It’s one big meme, it’s so quotable,” he says of the show. “Who else can say they get to go to work and hang out with Tina Fey and Robert Carlock and talk about comedy?” 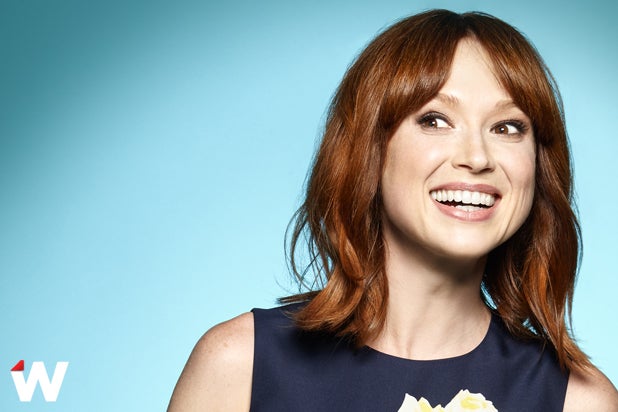 Ellie Kemper, “Unbreakable Kimmy Schmidt”
The byzantine comic world that Tina Fey and Robert Carlock created in 30 Rock was on full display in “Unbreakable Kimmy Schmidt,” along with the heavy subject matter of an abducted teen freed after spending 15 years in an a bunker with a doomsday cult leader. Comic actress Ellie Kemper, who came to the role after a career that included roles on “The Office” and in “Bridesmaids,” credits the memoir of real-life abductee Elizabeth Smart with teaching her an inspiring but not saccharine optimism. “She was in the depths of hell, but every day she said she listed what she was grateful for,” says Kemper. “So I count my blessings.”

Melanie Lynskey, “Togetherness” (HBO)
Granted, Melanie Lynskey’s breakthrough role may have come at the age of 15, when she made her film debut co-starring with Kate Winslet in Peter Jackson‘s “Heavenly Creatures.” But the New Zealand-born actress, who in recent years has appeared in a number of indie films, landed a Critics’ Choice Television Award nomination this year for her role in the Duplass brothers’ HBO series “Togetherness,” which stars Lynskey and Mark Duplass as a troubled married couple and Amanda Peet and Steve Zissis as their single friends. “My favorite comedies are sad and painful and uncomfortable and hilarious,” Lynskey says. “I love the moments when something heartbreaking is happening, but it’s funny at the same time.”

Constance Wu, “Fresh Off the Boat” (ABC)
ABC’s “Fresh Off the Boat” is only the second sitcom about Asian-Americans, and the first since Margaret Cho’s All-American Girl in 1994. It has also proven to be a showcase for actress Constance Wu, who plays the wife in a Taiwanese family who move to Orlando to open a restaurant. Wu’s previous roles were mostly in support in projects like “Stephanie Daley” and “Law & Order: SVU.” She says of the series: “I think that it’s great that we’re claiming our identity as Asian-Americans, and celebrating our voices. It’s not making us the butt of the joke, but letting us embrace our differences.”

Jack Falahee, “How to Get Away With Murder” (ABC)
Jack Falahee entered the first season of How to Get Away With Murder with a resume that leaned toward indie movies and teen dramas–but 15 jawdropping episodes and more than a few steamy scenes later, he’s made his mark as Connor Walsh, a ruthless, duplicitous gay law student interning at Viola Davis’ firm. “Going into this, I was just thinking of the work and I didn’t think of it as so groundbreaking,” says Falahee. “But seeing the response on Twitter, Instagram, social, and people coming up to me, it’s struck me right between the eyes how important this is. It’s 2015–it’s time for inclusive content.”

Titus Welliver, “Bosch”
“You could say he’s a hard-boiled detective, kind of rough around the edges, but there’s more depth than that,” says veteran character actor Welliver (Sons of Anarchy, Deadwood, Lost) of detective Harry Bosch, the leading character of 19 Michael Connelly books and now the series Bosch from Amazon. “He’s a deeply vulnerable and flawed character and a true anti-hero, which makes him really interesting to play.” But Bosch also keeps his haunted past bottled up, forcing on Welliver a minimalism that he embraces. “I really like that he’s a guy of few words,” says the actor. “The moments when we find him alone without dialogue are some of the moments that I like the most.”

Frank Grillo, Nick Jonas, Matt Lauria, Jonathan Tucker, “Kingdom” (DirectTV)
The cast of Kingdom, the DirecTV series about mixed martial arts, have had a pair of mantras as they’ve filmed the show: all in, all the time and unreasonable commitment.  “We generally leave the set with the gas tank pretty empty,” says Matt Lauria. “You shoot for 12, 14 hours, then go home, try to scrape up a dinner and hit the gym for dead-lifting until 11 o’clock.” Frank Grillo plays the owner of a Venice, Calif. gym, with Jonathan Tucker and Nick Jonas playing his sons and Lauria portraying a fighter aiming for a comeback. “Great drama is born from conflict, and the world of combat sports is just filled with personal conflict and professional conflict,” says Grillo. Adds Tucker, “It touches on the primal nature of being human. It’s physical, and it’s also deeply spiritual.”

Kether Donohue, “Your the Worst”
Kether Donohue, a fresh face and comic voice known for “Pitch Perfect” and “The Bay,” got a career boost when her FX show “You’re the Worst” got a Critics’ Choice Award nomination for Best Comedy Series. 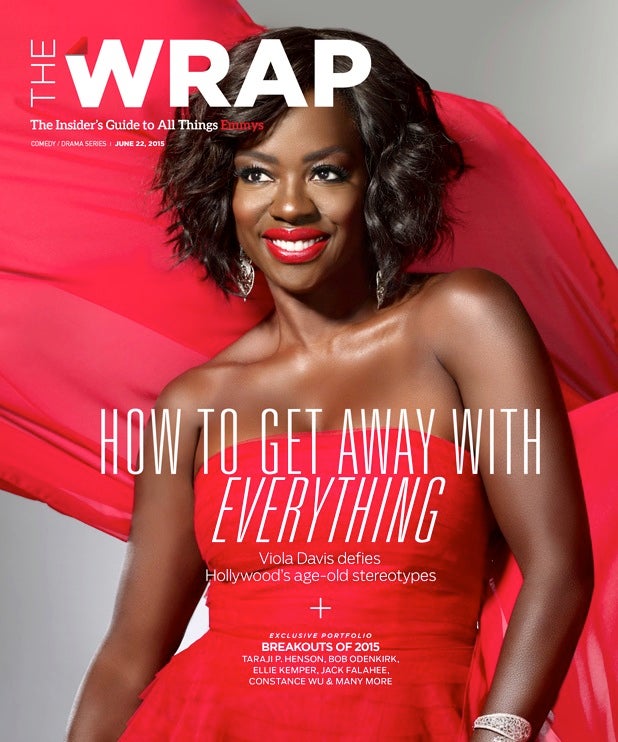