A version of this story first appeared in the TheWrap Magazine’s Emmy Comedy-Drama Issue. #selfieinterview produced in partnership with Verge.

Now that Rachel Dolezal has put issues of racial identity in the media spotlight, could that furor help an ABC sitcom get more attention from Emmy voters?

Probably not, but the network’s show “Black-ish” does manage to address its share of racial hot-button issues in between its laugh lines. The show stars Anthony Anderson and Tracee Ellis Ross as a couple raising four children; he’s a successful ad executive, she’s a mixed-race anesthesiologist from a hippie family, and the usual sitcom hijinks play out in a setting where racial identity is, as the series’ title suggests, always being questioned.

Ross is herself the child of a mixed-race union between singer-actress Diana Ross and record-industry business manager Robert Ellis Silberstein. Though she hosted “The Dish” on Lifetime and starred in the BET sitcom “Read Between the Lines,” she was best known before “Black-ish” for the eight seasons she spent on the show “Girlfriends,” which ran on UPN and the CW.

TheWrap: Is there a way in which “Black-ish” feels like a breakthrough for you?

Tracee Ellis Ross: Definitely, a very different group of eyeballs are seeing me. With ABC and the way we’ve been marketed, and the people that we’re reaching it’s a much broader audience than “Girlfriends” had. But mostly I think it’s the show that’s very groundbreaking.

For me, the thing that is the most groundbreaking about the show is that usually, African American families on television are families that happen to be black, and the stories are not told from that perspective. Our show is really about a family that is black, and although the show is not about that, it is told from that perspective. And the fact that it is being so well received across the board and accepted as just an American family is just great. 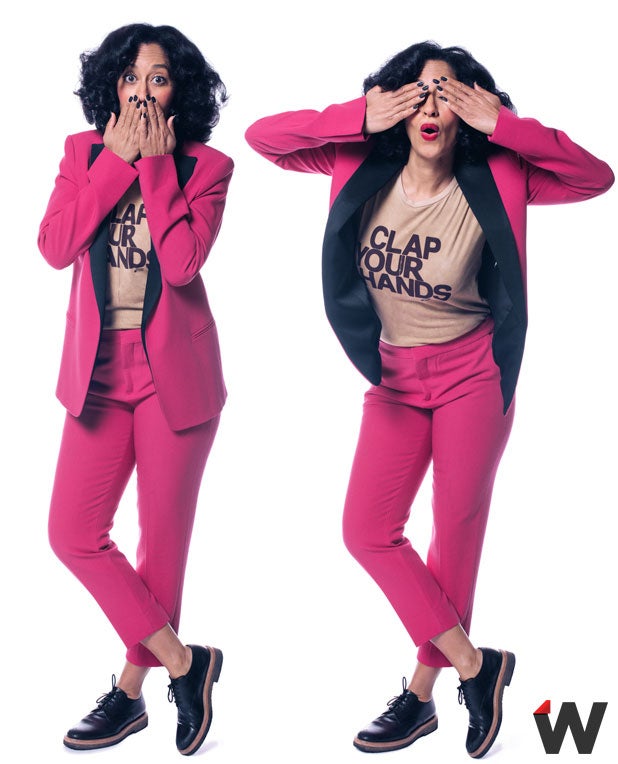 Beneath the sitcom format there is an attempt to deal with issues of racial identity, assimilation, culture … How seriously do you take that part of the show?
Well, because I’m not a writer, I don’t have to take it as seriously. But as an actor, it is something I take into account. It is something that drew me to the role, and something I’m really proud of about the show. The way we handle those issues, the way we explore them and unpack them, the tone with which we talk about them, is really current, important and just good. It walks a line that’s very difficult to find, a balance between going too far and not enough, or thinking that we’re speaking for everybody or for a single group. It’s dealing with it in a really thought-provoking way.

In sitcoms, the wife often has a fairly limited role. You’re …
The eye-rolling voice of reason?

Right. The wife stands around and rolls her eyes while the husband gets all the laughs. Were you worried about that going in?
No, I wasn’t. Mostly because I know that I’m not that person. I bring myself to my work, especially for television. When you’re on a television show and you’re playing something week by week, I really learned on “Girlfriends” that one of the best ways to go at it is to open that part of yourself that is that role, and just let her rip.

So I wasn’t worried about that. I also have a lot of trust in Kenya Barris, our executive producer and the creator of the show. I had a lot of trust that he didn’t want that either, that he was looking for a really full woman, not some paper-thin sitcom wife. I trusted that he wanted the quirkiness of me, and I’m often good at being the zany lady.

And it’s perfect, because it works so well with Anthony. I’ve heard it said that a successful couple is one where they’re both not crazy at the same time, and that’s really written into the show. We’re both not crazy at the same time, but one of us is always crazy. And by about the fourth episode, you start to realize, oh, Rainbow is just as insane as Dre. They’re perfect for each other.