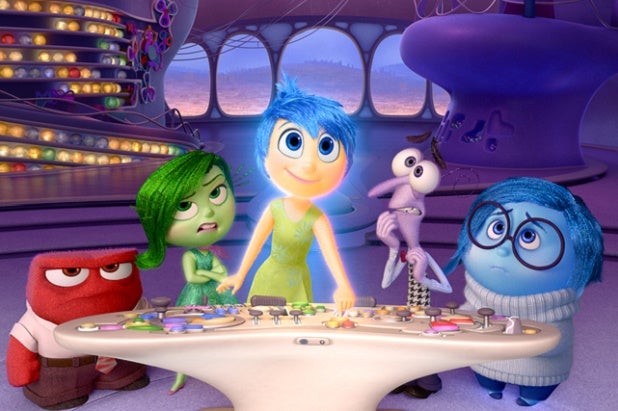 John Lasseter‘s and Ed Catmull’s Northern California-based animation studio is about to release its best movie in years, Pete Docter’s “Inside Out.” And awards-watchers are skipping right past the question of whether it will win the Best Animated Feature Oscar, where it’s an obvious frontrunner, to ask if it can grab a Best Picture nomination.

That’s something only three animated films have ever done, and a ridiculous bar by which to measure success.

Also Read: 'Inside Out' Will Be First Pixar Movie Not to Debut at No. 1

The other animated film to land a best-pic nod, and the only one to do so in a year of only five Best Picture nominees, was Disney’s “Beauty and the Beast” in 1991.

Asked by TheWrap if he thought about a nomination or had it as a goal, Docter was adamant that he didn’t.

“No, no,” he said. “After five years and all the struggles, we’re just happy to finally finish it. That everybody seems to be reacting so positively, that’s the reward.”

But just for kicks, and because Pixar has a habit of making us think about stuff like this, let’s examine what it might take for “Inside Out” to actually get that elusive Best Picture nomination.

It’s a longshot, but by our estimation it has a chance if these five things happen:

1. Big grosses
Of course “Inside Out” will open well, with tracking suggesting opening-weekend grosses in the $60 million range. In the long term, no Pixar movie has grossed less than $162 million domestic or $361 million worldwide, and in the last decade only “Cars 2” has stopped shy of $200 million in the U.S., though it topped $500 million worldwide.

(As the studio’s production costs have risen toward $200 million, Pixar needs those figures.)

Also read: ‘Inside Out’ Review: In Pixar’s Latest, Emotions Run the Show

But “Inside Out” is an adventure set inside the mind of an 11-year-old girl, with sequences devoted to showing abstract thinking and explaining why we forget some things but remember others. That’s a trickier concept to sell, especially to kids, than many of Pixar’s films; its blockbuster status is more assumed than assured.

And for the moviemaking professionals in the Academy to take an animated film seriously in the Best Picture race, it can’t appear to be underperforming — it must be an event of sorts. “Toy Story 3,” after all, was the top grossing film of 2010, “Up” the fifth-highest grossing of 2009. “Beauty and the Beast” made the Top 3 in 1991.

“Inside Out” doesn’t have to beat “Jurassic World” or “Star Wars,” but it has to be seen as a solid financial success. And despite the tricky concept and the fact that it’ll likely be the first Pixar film not to top the box office in its first weekend, it could well do that: Docter’s two previous movies, “Up” and “Monsters, Inc.,” are both in the Top 10 among all animated features. (The only other director with multiple entries in the Top 10 is Docter’s Pixar colleague Unkrich, who directed “Toy Story 3” and served as co-director on “Finding Nemo” and “Monsters Inc.”)

2. Near-unanimous critical success
The folks who made “The Social Network” and “Boyhood” can tell you that all the critics’ awards on the planet won’t sway the Academy’s final vote. But for an animated feature to figure in the big race, it needs to be unassailable, riding in on a wave of praise.

So far, “Inside Out” is at 100 percent with 61 reviews in. That’ll likely change with the inevitable contrarian or two (you know Armond White will hate it), but it seems a safe bet to remain one of the best-reviewed movies of the year.

It’s the same reason why no documentary has ever gotten a best-pic nomination: because voters know docs have their own category.

“Toy Story 3” and “Up” were nominated after the Academy’s Board of Governors doubled the Best Picture field to 10 films in 2009, but no animated film has cracked the list since AMPAS changed from a flat 10 to a variable number in 2011. (Eligible films have included the massively successful “Frozen.”)

And while it’s theoretically possible that the board could restore a flat 10 nominees as it reconsiders the rules for next year’s Oscars, Academy insiders suggest that it’s more likely they’ll stand pat. It’s even conceivable they could go back to five nominees, an overhaul said to have some support among the governors.

That kind of rule change would all but kill the chances for “Inside Out” or any other animated feature to land in the marquee category. The best hope for Pixar: AMPAS sticks with its variable system, and all its complicated math calculations yield nine nominees, the way they did during the first three years that system was in place. (Last year, it produced eight.)

4. Nominations in other categories
For an animated film — or any other film, for that matter — to grab a best-pic nod, it must be a real contender in other categories as well. “Beauty and the Beast,” for instance, received six nominations overall, though four of those (including its two wins) were for three of its songs and its score. “Toy Story 3” and “Up” received five nominations each, and in both cases their nods included screenplay.

For the film to be a contender for picture, the “Inside Out” script by Docter, Meg LeFauve and Josh Cooley will likely have to be held in such high regard that it too is a contender for the Best Original Screenplay Oscar. And there’s a pretty good chance it will be.

5. Disappointing fall and winter releases
“Inside Out” can’t do it on its own — it needs help from other presumed Oscar contenders to thin the field by falling flat with critics or moviegoers, the way a number of ballyhooed films always do. (Remember last year, when the pundits figured Angelina Jolie‘s “Unbroken” was the Oscar frontrunner, sight unseen?)

So far this year, the pickings have been pretty slim for Best Picture contenders. But the last four months of the year are currently packed with films that seem likely to entice Oscar voters. So starting at the Venice, Telluride and Toronto Film Festivals, Pixar needs to hope that some of the year-end biggies end up falling short of their advance buzz.

Good news: Few things are more reliable in the Oscar game than betting on the fact that a lot of the highly-touted end-of-the-year releases will disappoint.

Oh, and there’s one other November release that could get in the way: “The Good Dinosaur.” It’s from Pixar, and will make this the first year the company has ever released two features in the same year.

Hmmm … Think it has a shot at a Best Picture nomination?