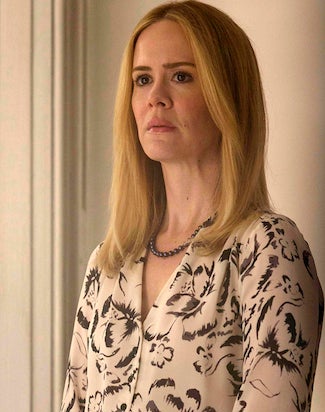 Sarah Paulson is no stranger to the Emmys, having been nominated twice before.

This year is different, though, as she faces even stiffer competition in the Lead Actress in a Miniseries or Movie category for her role as Cordelia Foxx in FX’s “American Horror Story: Coven.” Since the actress switched categories, she’s up against her costar Jessica Lange, Minnie Driver and Kristen Wiig, to name a few. Does she have what it takes to win her first Emmy?

Ahead of this year’s Emmy Awards, Paulson looked back on this season of “AHS: Coven” and shared which episode of the show she would have submitted for Emmy consideration when she took TheWrap‘s Emmy nominee Q&A Quickie.

What was the toughest thing you had to do this season?
Sarah Paulson: The toughest thing was to wear the prosthetics over my eyes once my eyes had been gouged out. But, it wasn’t the prosthetics itself that was the hard part. The hardest part was that it prohibited me from making real eye contact with my fellow actors. So, every time I had to do an intense scene or an emotional scene, or an intimate scene, I couldn’t see into anyone’s eyes and it just made me realize how much I use that in my work, the other actor’s face and reactions. And you can see people listening. And I couldn’t. I didn’t have that at my disposal when I had the prosthetic pieces on and that made it really hard. It was almost like I had to act with some of the greatest actors that ever were, like Franny Conroy and Jessica Lange, but it was as if I was acting with a piece of tape because all I could do was hear them, but couldn’t see them. And that was really difficult.

What was the most fun thing you had to do this season?
That was probably the episode where I became The Supreme. Because I finally, after a season of watching everybody get to have special magic powers, and all I had was… I was a really great herbologist… I actually got to do some telekinesis, I got to teleport, I got to do everything and survived it all. So that was the most fun. And also just being the oldest member of the cast, in terms of the young girls section of the cast, I got to finally be like, ‘You know what girls, I can do all of it and you can only do one of them.’ So I liked that.

Let’s assume that somebody has never seen your show. What would you say to persuade them to watch it?
I guess what I would say if they’ve never seen it is, ‘Look, you don’t have to start at the beginning, you don’t have to watch Season 1 to begin watching Season 3 or 4. Every season stands alone so all you have to do is make a tiny commitment to watch 13 episodes, which we all know anybody can do in their bed over the course of a day and a half. So, there’s really no excuse.

You’re an Emmy voter, but you can’t vote for yourself or your show. Who’s at the top of your ballot?
Ryan Murphy for directing “The Normal Heart.” Robin Wright for “House of Cards.” Matt Bomer for “The Normal Heart” and Margo Martindale for “The Americans.” And anyone in the cast of “Orange Is the New Black.” Anyone. And the show itself. Every single category for “Orange Is the New Black.”

If you could play any other role on any other show, what would it be?
That’s a toss-up between Robin Wright on “House of Cards” and Maisie Williams on “Game of Thrones.”

What was the last TV show you binge-watched? How many episodes did you see in a sitting?
It was the second season of “Orange is the New Black” and I watched maybe six of them in one sitting. And then I think I gave myself a four hour break and maybe grabbed myself a sustaining meal, and then I went back and finished.

Which episode was submitted for your Emmy nomination?
Because I’m in a miniseries this doesn’t apply to me, but the episode I would submit would be the finale.

Is this the Golden Age of Television?
I think so. I think there are no greater parts across the board, but certainly for women, in any other medium than television. And particularly, I think cable television. There are constantly new opportunities coming up. Now networks like Bravo, or Amazon, who never had original scripted programming, are doing that. So the possibilities feel quite endless, which the longer you’ve been in the business, the more excited you are that it seems more things are coming up which means more opportunity to actually have a job.