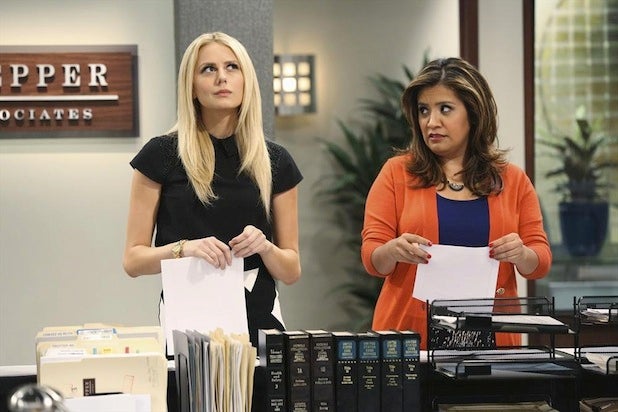 It’s time to lump Cristela Alonzo in the same category with John Mulaney and . Sometimes incredibly funny people just make terrible sitcoms. Cristela has a delightful charm about her, but ABC’s “Cristela” is so bad it’s downright offensive.

They say there’s nothing new under the sun, and that’s certainly true of this script. The pilot episode felt like every bad comedy that’s been on television in the last 30 years. The characters are so two-dimensional I was surprised I could still see them when they turned sideways.

Even Cristela herself is a stereotype. She’s a larger woman who jokes about her weight and jokes about her life and really just throws more jokes around than NBC’s classic Thursday night lineup. And while she can be funny, she’s no .

Like “Mike & Molly,” Alonzo is on a very bland family show, and like , she is clearly the main draw here. But while McCarthy can make bad dialogue funny through her performance, Alonzo gets lost in it.

Maybe that’s something that will come with time, if the show gets any. But as it’s airing on ABC Fridays after “Last Man Standing,” which is the epitome of what I would called “adequate comedy,” she may have some breathing room.

Add to that the fact that she’s starring in a show with a mostly-Latino ensemble, which is something we desperately need more of on television, and the network is likely to be even more patient. The problem is that while we need more ethnically diverse television, that shouldn’t mean we have to accept sub-par entertainment to get it.

“Black-ish” is a show with a diverse cast, and it’s well-written and funny. The latter is the most important thing about it as a sitcom, and a big part of the reason ABC just picked it up for a full season. And it’s nothing groundbreaking; it’s a typical family with a grandfather thrown in for luck.

Natalia has the mother-guilt thing down to an artform, exacerbated by her Catholocism. Yes, Catholic guilt is alive and well in this comedy, and it’s not the only cliche on display. How about the fact that Cristela’s brother-in-law hates her, but his schlubby best friend is in love with her … and she hates him? And he doesn’t get it and hits on her relentlessly. Hilarious.

Then there’s the job that is at the center of the premiere. Cristela wants to take an internship at a major law firm and just imagine what we find there. Her boss is an older white man who says racist things, and his daughter is a blonde, pampered idiot who wants an internship, too. Stereotype, meet fellow stereotype.

Back home, the reason given for Cristela’s mother’s general disapproval is disappointing and rooted in cliche. Her sister seems to resent Cristela only because she is living with her, and perhaps because Cristela is corrupting her daughter by encouraging her to be happy and do what she wants.

I’m not sure what the goal is with Daniela as a character, but so far she’s been painted as the most terrible and shallow person on the show (and this includes daddy lawyer’s daughter). She doesn’t want her daughter to play soccer, because girls don’t do that — so she’s not very progressive — and she thinks Cristela should take a low-paying job over this big internship, just so she’ll move out.

Also read: ‘Mulaney’ Review: Fox Comedy Gets Off to an Awful Start

Now, part of this could be coming from her husband, Felix, who is also rather terrible. He openly despises Cristela, wants her out, and says terrible things to her throughout the pilot, though I’ll give the writers credit for the best line in the show coming out of one of these exchanges.

The easiest jokes to come up with are insult jokes, and “Cristela” relies heavily on them. The best came when Felix told Cristela, “If you were my wife, I would put poison in your coffee.”

“If you were my husband, I would drink it,” she countered.

It’s a good joke, and Cristela laughs at her own cleverness … just as she laughs at her own jokes throughout the premiere. Honestly, there were times I thought I was watching a dress rehearsal. I’m certain they used takes where Alonzo generally broke character and laughed, because it looked so natural, but it made the show look amateurish.

It’s not a bad thing to do, and I’ve seen it work very well in comedies before, but “Cristela” was leaning on it a bit heavily, with characters cracking themselves up everywhere. Either they didn’t have the budget to keep going until they got a clean take, or their philosophy was, “at least somebody will be laughing at this.”

Even the studio audience wasn’t sure what to do. They seemed a little too trained to be believable. After a notable delay, they cheered for Felix’s schlubby friend Alberto like it was sliding in Jerry’s door on “Seinfeld,” except this was his first appearance; he hadn’t earned that kind of response.

Or maybe it just took them a moment to recognize that he was being played by Gabriel Iglesias.

Also read: ‘A to Z’ Review: NBC Comedy Is Full of Cuteness and Light

Everything about this comedy felt canned, artificial and forced. The dialogue was awkward enough that the actors didn’t look comfortable delivering their lines, the audience wasn’t always sure when and how to react, and I wasn’t sure how much longer I could take it.

Cristela summed it up herself in one exchange in the episode.

“It isn’t funny,” she was told at one point, because she responds to every single thing said to her with a joke.

“It could be if you laughed,” she said.