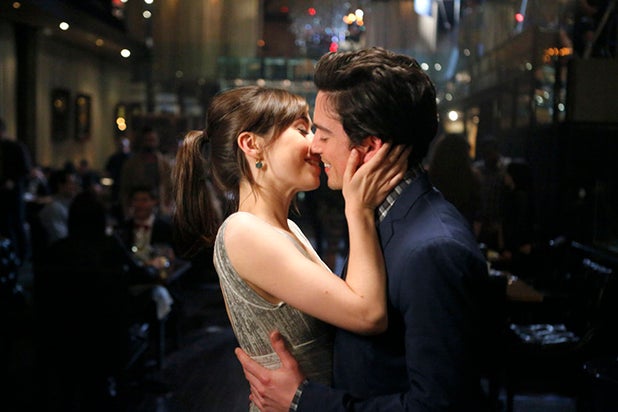 The cynical part of you will wonder how many suits it took to come up with “A to Z,” a TV romcom starring two of the medium’s most charming and adorable actors — Cristin Milioti and Ben Feldman.

Seriously, could these two people be any cuter? It’s ridiculous.

But don’t dismiss this freshman NBC offering, which debuts Thursday, because it colors inside the lines and is one of about a half a dozen new shows in this vein. Predictability, at least in the case of this series and its stars, is a welcome conceit.

Milioti, of course, won over fans of “How I Met Your Mother” when she turned out to be the titular mom producers didn’t introduce until the show was practically over. While her character didn’t get the happy ending she rightfully deserved, Milioti proved that she is not only lovable but believable as an actress. Now she’s co-headlining a series that also plays up romance and destiny.

Feldman, meanwhile, is best known for his turn as Michael Ginsberg, a talented but troubled advertising creative on AMC’s “Mad Men.” As fans of that drama know, Ginsberg didn’t fare too well either.

Not only does “A to Z” give Milioti and Feldman a new opportunity to woo and gain fans but the sweet-at-heart sitcom proves that worthwhile shows can happen to worthwhile actors. Milioti plays Zelda, a pragmatic attorney who doesn’t believe in fate and love at first sight. And Feldman plays Andrew, the hopeless romantic who can’t wait to fall in love.

The two officially “meet cute” when Zelda goes to get a refund from the dating site where Andrew just happens to work. But, as it turns out, Andrew and Zelda have crossed paths before, they just weren’t paying attention. Or were they?

As Katey Sagal tells us in the intro and outro for the show, Andrew and Zelda date for eight months, three weeks, five days and one hour. After that time passes, it’s unknown whether the two get married or break up — surely, there won’t be a death a la “HIMYM” — but the fun is in seeing this love story play out.

Also read: Jerry Seinfeld Has a Flashback to the Day His Hit Sitcom Got the Greenlight From NBC

See, Zelda is a realist and Andrew is a dreamer but their anime-like eyes light up when they look at each other, their voices dance when they talk to each other and they click. The butterflies-in-the-tummy infatuation between the two of them is easy and comforting and it reaffirms the belief that love, in its varied forms, still exists.

We’ve all seen this before and the creators behind “A to Z” know that. They even play up certain romcom tropes such as the black best friend (Lenora Crichlow, “Being Human”) for her and the portly best friend (Henry Zebrowski) for him. Groan. Hopefully, both characters will gain more depth as the series evolves.

Until then, Milioti and Feldman infuse a lot of freshness into what could’ve been a stale and staid outing. They are deftly convincing as a couple of young and attractive professionals who look for love, find it and have to figure out what to do next. All viewers have to do next, is start watching.

Note: An earlier version of this review mistakenly stated that Allison Janney was the show’s narrator. In fact, Katey Sagal narrates “A to Z.” TheWrap regrets its error.