As soon as filmmaker Sofia Alvarez read the Sarah Dessen novel “Along for the Ride,” she immediately envisioned a movie adaptation.

“Along for the Ride” tells the story of Auden West (who is played in the film by Emma Pasarow), who is one summer away from heading to Defriese University. Auden’s parents split up when she was younger, and she lived with her mom (Andie MacDowell) through high school, but for the summer she decides to visit Colby, a small beach town where her dad (Dermot Mulroney), his new wife Heidi (Kate Bosworth) and their newborn daughter Thisbe live.

Alvarez is no stranger to writing adaptations — she adapted “To All the Boys I’ve Loved Before” and the first sequel “P.S. I Still Love You” for Netflix — and as part of her writing process in adaptations, Alvarez has made it a rule to read the book once and then build the screenplay from the parts of the book that stand out to her on that first read. 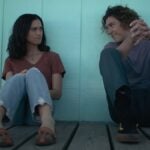 “Sarah Dessen was so wonderful in that before I wrote a word, we had like a three-hour conversation where we were getting to know one another,” Alvarez said. “And that conversation was so useful because a lot of our thinking was aligned. She told me that the original name of the book was ‘World of Girls’ and something that I really responded to about the book was all the relationships between the women in it. Sarah wrote the book when she was a new mom. She wrote it when her daughter was an infant, and I was adapting the book when my son was also a newborn. And so we came to it from a very similar place in that way.”

When it came to casting the film — which marks Alvarez’s directorial debut — the filmmaker had strong feelings about the role of Auden.

“I really wanted Auden to be [played by] an unknown actor. Sarah Dessen has such a huge fan base, and I wanted them to feel like this character they love has sort of come to life out of the book and not to think ‘Oh, this actor I know is playing Auden,’ but like, ‘Oh, this is like that person I’ve been imagining.’” Alvarez said. “She just like walked off the page on my movie screen.”

Part of Auden hopes that her time in Colby will be different from her high school years, in which she had few friends and mostly kept to herself. Besides her own mother, Auden doesn’t have a lot of close female friendships at the beginning of the story. She even takes to her old habit of staying up late, drinking coffee and either reading or driving around the small town. Then she meets Eli.

A fellow insomniac, Eli bikes the boardwalk at night when nobody else (except Auden) can see. His best friend Abe died on their way back from a sport biking competition, so Eli refuses to bike in front of others. After he passes Auden in his usual spot for a couple of nights, he approaches her and takes her to a hidden gem of a diner.

“That’s a scene from the book that I really love,” Alvarez said. “I love how in that scene, they’re strangers, but they’re strangers who feel like they already know one another in some ways. They just have that easy rapport and I think they feel comfortable with one another. David, who’s our art director and who plays Clyde was a punk DJ in Malibu in the ‘80s, and so we had like lengthy conversations about what that song should be. […] I think that place is magical when they walk in and then I think when that song comes on, it becomes even more magical.”

After getting to know Auden, Eli suggests she put herself out there and do a quest full of things she’s never done before, sort of like a bucket list. 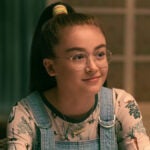 Also Read:
‘To All the Boys’ Spinoff Series ‘XO, Kitty’ Ordered at Netflix

“Eli is someone who Auden connects with very quickly and they feel comfortable with one another very quickly, but it takes her a beat longer to sort of find that same comfort with the women in the movie both with Maggie, the other girls she becomes friends with in Clementine’s, but then also with her stepmother,” Alvarez said. “So [it’s] tying those two storylines together, and having it be like a romance, which is I think why we all come to these YA films is you want to see them get together, but this idea of female friendship was an equally important part and it’s something that was just as important to Auden to find in Colby.”

Despite the fact that “To All the Boys” came out just four years ago, Alvarez says the landscape in which she wrote “Along for the Ride” had markedly changed. And adding on directing duties challenged her — in a good way. 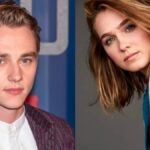 Also Read:
Netflix Acquires Rights to YA Adaptation ‘The Statistical Probability of Love at First Sight’

“When I was writing ‘To All the Boys,’ I was just the screenwriter, and I was writing it before this huge boom of like teen rom-coms having their moment,” she said. “And then with ‘Along for the Ride,’ the biggest difference was, this is kind of an established genre at this point, but also I knew I was going to be directing it. It wasn’t about just writing it and it wasn’t about just the story. It was about building the whole world. And, you know, what was Colby going to look like and who were we going to cast and I felt like I could be very free in my writing. Because I knew that those decisions were going to come down to me.”

Note: Spoilers for the “Along for the Ride” ending are discussed through the rest of this article.

Alvarez’s adaptation satisfies both the saccharine hopefulness of rom-coms as well as the more realistic side of young love. Auden and Eli both have their flaws, and own up to their mistakes.

“I feel like if you look at the end of the movie, I think that scene feels very real, where they’re talking in the parking lot, and they have this reconciliation with one another and it’s clear that they’re good with one another. They’re not angry anymore, but it’s also not clear that they’re going to have a relationship have that conversation,” she said. “I think that feels very real and very true to life that you go through this experience with someone, you both deeply care about one another, and maybe even love one another, but you have some sort of disagreement along the way. And you apologize, but then you’re not sure how to get back on track.”

More than the relationship lies at the heart of the film, with family problems and past loss anchoring the lighter moments. 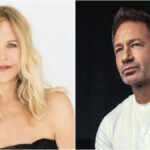 Also Read:
Meg Ryan to Direct and Star in Rom-Com ‘What Happens Later’ With David Duchovny for Bleecker Street

“I love that the next morning after [the fight] happens, [Auden] sleeps through the night, she takes a shower and she looks in the mirror and I think that moment when she looks in the mirror she thinks like I’m okay with myself,’” Alvarez said. “‘I’m good with myself. This summer has sort of come to a close and I’m okay.’ And I think the real life version of this movie kind of ends there with Auden being good with who she is, but because this is a rom com and because we’re in the business of wish fulfillment, I feel like who doesn’t want the moment after they realize they’re okay with themselves for the person they like to be sitting on their front lawn.”

As with all high school love stories, Eli’s and Auden’s doesn’t exactly fade into the distance, but she does go to college while he gets back into biking.

“I just love that the movie ends with Auden and Maggie because I feel like the friends you make at that age are the people who end up staying in your life longer than maybe the people you fell in love with at that age,” she said. “So it feels very real to me that the final shot in the movie is you know their door at college but with Auden and Maggie’s things on it ,and you know that Eli and Auden have like changed one another for the better. Whether Eli and Auden stay together or not, she is going to have this friendship with Maggie for the rest of her whole life.”