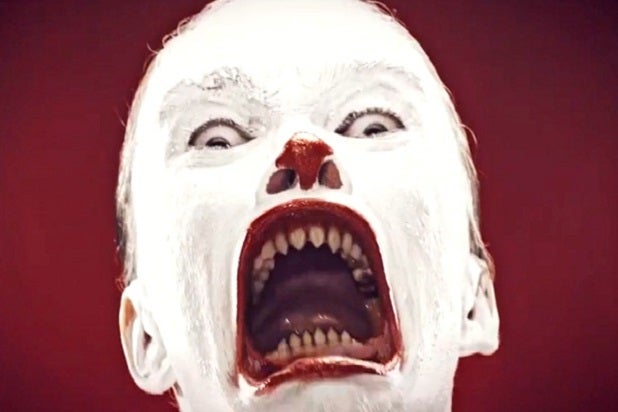 FX’s “American Horror Story” returns for its fourth iteration, subtitled “Freak Show,” Wednesday, and creators Ryan Murphy and Brad Falchuk appear to be pulling out all the stops this time around (yes, even more so than last season), with an assortment of new cast members along with a slew of returning actors and actresses.

To prepare for the new season, which centers around a freak show in 1950s Jupiter, Fla., TheWrap has assembled a primer on what viewers need to know before parting the tent flaps and immersing in the twisted world of “American Horror Story.”

WARNING: Very minor, slightly spoilery details ahead, so if you want to go into Wednesday’s premiere with absolutely no idea of what happens, stop reading now — though if that were the case, you really shouldn’t have clicked on this story to begin with.

1) Murphy and Falchuk are sending in the clowns.

Well, at least one, anyway, in the premiere episode — but he should be enough to haunt your nightmares for a long, long time. Prepare yourselves for the horrific presence of Twisty the Clown (played by John Carroll Lynch), who seems determined to take top honors among the noble legacy of evil clowns. Likes: Contorting balloons into perverse shapes, tormenting caged children, getting all stabby. Dislikes: People asking him what happened to the rest of his mask. Murphy told reporters on Tuesday that Episode 4 of the season will include “a big story” revealing the Twisty’s identity and motivations.

2) Evan Peters gets his freak on in more ways than one.

This time out, “AHS” veteran Peters plays Jimmy Darling, a young man afflicted with lobster-like claws for hands. While such a deformity might seem like an impediment, Jimmy makes the most of it — let’s just say the local womenfolk appreciate a man with long, thick appendages at the ends of his arms.

For all of those who enjoyed Lange’s rendition of “The Name Game” in “American Horror Story: Asylum,” rejoice — Ms. Lange, in her new incarnation of freak show leader Elsa Mars, will belt out another tune this time. Hint: Think Bowie. According to Murphy, Lange will sing again during the season, tackling a Lana Del Rey tune, “which is quite something to behold.”

4) Speaking of Jessica Lange, this will be her last season of “American Horror Story.” Or maybe not.

No season of “American Horror Story” would be complete without reports that it will be the last for Lange, who has been with the show from the beginning. But if she wants out, she’ll have to make her way to the exit over Murphy’s dead body. “No, never accepting it, no,” Murphy told reporters Tuesday, when asked if he had accepted Lange’s departure. While Murphy conceded that she might not appear in all 13 episodes next season, Murphy noted, “I feel that she feels very reinvigorated in some regard” by the upcoming season. “She and I are probably going tp have a dinner date when the holidays come around,” Murphy predicted. “I’m sending bribes every day.”

5) The setting for the next season of “American Horror Story” has already been established.

During Tuesday’s conversation with reporters, Murphy says he’s “already locked down” what the next season will be — and if you pay attention to “Freak Show,” you just might figure out what it is. According to Murphy, he “sprinkled clues” about next season’s theme in the first two episodes of “Freak Show.”

6) Somebody has a bad case of affluenza.
Among this season’s newcomers is “All My Children” alum Finn Wittrock, who plays poor little rich boy Dandy Mott. Spoiled to the core, Mott is the man who has everything — except for a deformity that would earn him the spot in the freak show that he desperately craves. Suffice to say, he doesn’t take the rejection well.

7) This year’s Halloween episode will be a doozy.
Murphy is especially proud of the two-part Halloween episode he cooked up for “Freak Show.” “This year I love what we’ve done — I think it’s our best one yet,” Murphy said Tuesday. This year’s Halloween extravaganza  will revolve around Edward Mordrake, a 19th century character “who in real life  was supposedly born with a face on the back of his head, and it would whisper evil things,” according to Murphy.

8) Matt Bomer‘s appearance is going to be intense.
“White Collar” star Matt Bomer, who worked with Murphy on HBO’s “The Normal Heart,” appears on an episode of “Freak Show” — and while it’s just a one-off, Bomer makes the drop-in worth it. According to Murphy, Bomer has “this seven-page scene” with fellow newcomer Michael Chiklis that’s “really fucked up,” and a scene with Wittrock that’s “probably the scariest thing we’ve ever done. It’s a true horror scene.”

9) Neil Patrick Harris is still in the mix.
Doogie Howser could be joining the cast. Neil Patrick Harris, who earlier this year expressed interest in appearing on “Freak Show,” might still guest star this season. “I spoke to him a week ago, he was fresh off his wedding,” Murphy said. “He is game.” Murphy added that the two are still “melding” the specific ideas that each have for the appearance, which would likely occur in one or two episodes later in the season’s run.