Amy Schumer had a handful of jokes she had written for the Oscars that were given the “uh, no” from the show’s producers, among them was one about the “Rust” shooting, which the comedian-actress tried out on an audience in her first public appearance since co-hosting the March 27 ceremony.

Schumer told Vanity Fair in an interview posted on April 4 that she had jokes planned about conservative podcast personality Joe Rogan, the sexual-misconduct allegations against James Franco and the “Rust” shooting by Alec Baldwin that resulted in the death of the film’s cinematographer Halyna Hurchins.

Taking the stage at Las Vegas’s Mirage Theatre on April 2 as part of the Aces of Comedy series, Schumer said that the “best way to comfort ourselves” about what went down during the Oscars between Will Smith and Chris Rock was “would be for me to say the Oscar jokes that I wasn’t allowed to say on TV.” 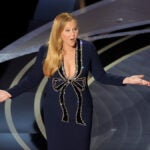 She then went into detail about the jokes she had planned, many of which she said her lawyer warned her against.

“‘Don’t Look Up’ is the name of a movie? More like don’t look down the barrel of Alec Baldwin’s shotgun,” she said. “I wasn’t allowed to say any of that [at the Oscars], but you can just come up and [slap] someone.”

Schumer was referring to the October 2021 accidental shooting death of Hutchins in which Baldwin pointed a prop gun in her direction and it fired, also injuring director Joel Souza in the process.

And, of course, she backtracked a little to get into more depth about the slap heard around the world. 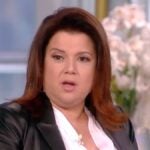 “I don’t even know what to say about the Oscars. I have no jokes about it. All I can say is that, I don’t know if you saw this, but Will Smith slapped Chris Rock,” she mused. “Did that cross your newsfeed?”

She did, however, get serious for a minute, adding, “It was just a f—ing bummer. All I can say is that it was really just sad. It says so much about race, about toxic masculinity, it’s just, everything. It was just really upsetting.”

Schumer said that she and co-hosts Wanda Sykes and Regina Hall were having a great night, until “Ali,” as she referred to Smith (referencing his Oscar-nominated turn boxer Muhammad Ali in the 2001 film “Ali”) slapped Rock. “I was kind of like, feeling myself,” she said. “I was like, ‘Oooh, somebody’s monologue went well.’ And then, all of a sudden, Ali was making his way up and just [pretends to slap someone].” 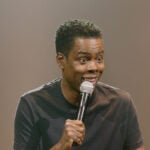